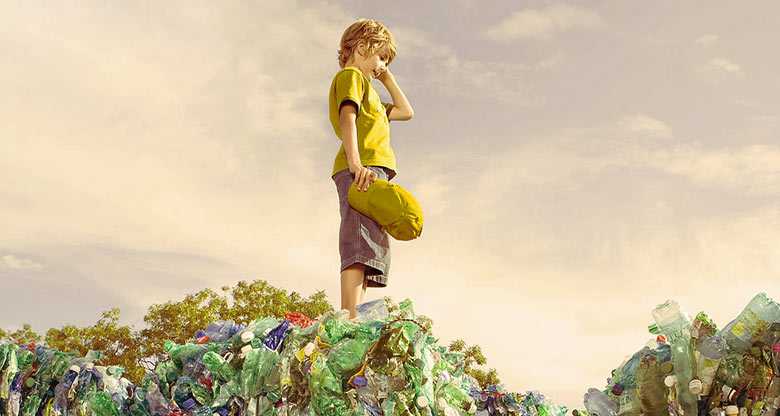 The case for a circular economy

Commonwealth Bank economists and industry leaders recently discussed how business and consumers can make the switch to a more sustainable circular economy.

The default behaviour of extract, use and discard will not build the sustainable future the world is striving for.

For most of human history, economies have been linear in nature: the lifecycle of goods moved from left to right – starting with the extraction of materials, followed by product manufacture, then use and finally waste (typically into landfill).

But CommBank’s Head of International Economics, Joseph Capurso, says the consumption demands of an ever-increasing global population with higher incomes mean we must shift the economy from linear to circular – and quickly – if we are to move to a more sustainable path.

If a linear economy leads directly to waste, a circular economy is a loop in which materials and products are reused.

“You’re still going from left to right – take, make and waste. But in addition to that, you have what we call the four Rs: reduce, re-use, recycle and recover,” Capurso said in a recent CommBank Global Economic and Markets Research podcast. “And those four elements are about keeping the materials in the economy for longer, rather than just move them from left to right to landfill.”

The aim is to dramatically reduce environmental damage, pollution and waste.

Australia’s rating is lower than the global average at 4-5% due mostly, says Capurso, to the mining-focused structure of the Australian economy as well as its fossil-fuel dependent transport system.

“Each one of us generates around 60 kilograms of single-use plastic waste every year,” Dr Tang said, adding that NSW is on track to run out of landfill space within 15 years.

In addition, said Tang, the ban on waste exports and Australia’s own bans on exporting certain waste types – while a very positive development – means that Australia currently exports only 5% of its waste, which means we need to manage the remaining 95% locally.

Sanjay Dayal, CEO of container and packaging business Pact Group, said one of the biggest challenges in creating a circular economy was creating demand from consumers.

“One of the things we've been working with the government on is incentives. Once the trigger is there, and consumers start to see that recycled products are very similar in price, the whole psyche of the consumer – as well as the industry – starts to change,” Dayal said.

Fortunately, said Tang, there is a generational shift in attitudes towards recycling, re-using and reducing waste – with Gen Z and millennials overwhelmingly more inclined to prioritise environmental credentials of the companies and products they use.

She also said that going circular makes economic sense. The efficiency benefits of a truly circular economy could be as high as $2 trillion within 20 years.

The good news is that an important joint venture is underway in Australia that will increase the circularity of the economy. Three of the panellists at the CommBank event are part of a joint venture to build a PET recycling plant in Albury/Wodonga on the NSW/Victoria border that will reprocess the equivalent of 1 billion plastic bottles each year to produce 100% recycled PET pellets that can be used to manufacture new packaging. 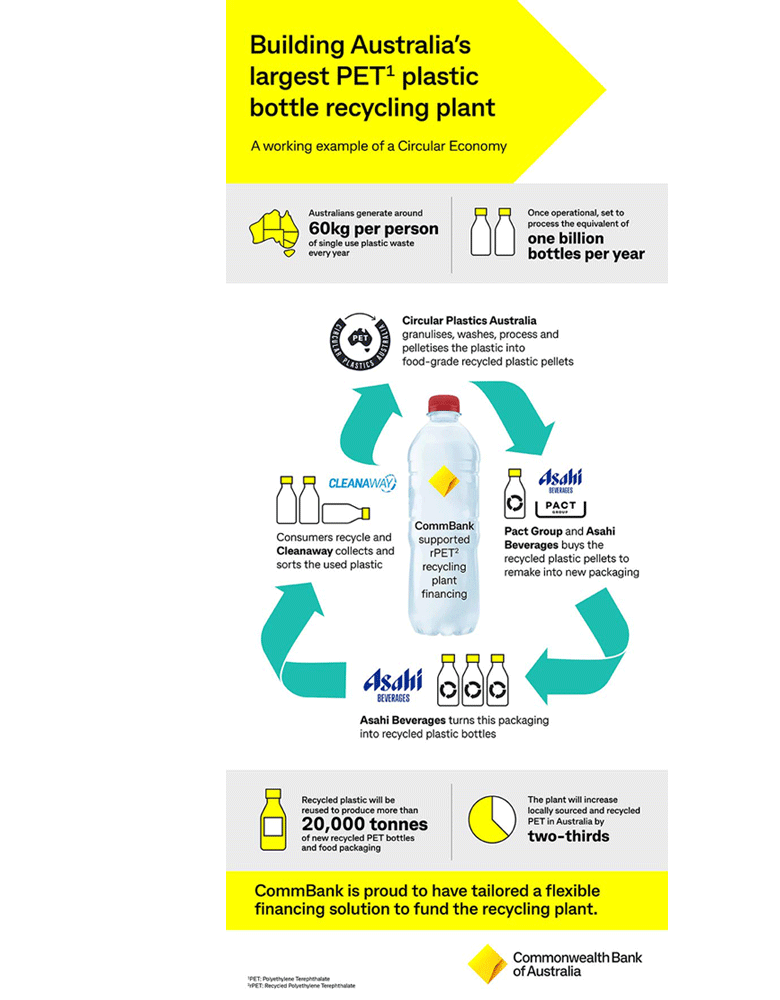 Pact is the largest recycler in Australia and will operate the plant on behalf of the joint venture. It will use the recycled materials to make more packaging.

Asahi Beverages CEO Robert Iervasi said the collaboration was a good example of industry coming together to find a solution to a societal problem.

“It makes commercial sense, it helps us deliver our own sustainability growth agenda and we have the right partners in Pact and Cleanaway,” Iervasi said.

Brendan Gill, Chief Operating Officer at waste management group Cleanaway, said much of the waste in landfill would degrade and produce methane, which is 30 times more potent than carbon dioxide.

“Cleanaway’s mission is to make a sustainable future possible, we see waste as a resource and so we look to maximise the value of the materials we collect. We know that both plastic and glass can be beneficially reused. Even baby nappies can produce energy when processed through an Energy from Waste facility. There's a million things in waste collections that can be reused and they're useful to society,” Gill said.

CommBank helped tailor a flexible financing solution to bring the plant to life. It has provided half of the $33 million debt package, with the other half being funded by the Clean Energy Finance Council.

“We’re proud to partner with our clients to help shift our economy closer to a natural harmony that ensures a more sustainable future and helps build a better Australia,” said Jake Potgieter, Managing Director, Industrials, Transport and Consumer.

“As Australia advances its transition, there’s a massive opportunity to uplift the circularity of our economy while building more efficient, diverse and sustainable supply chains.

“Our leading client proposition in part comes from the way we are organised – with banking teams structured around economic ecosystems, rather than sub-sectors. This allows our bankers to view our clients through the supply chain, understand their strategic objectives, and identify and work with customers on risks and opportunities in the system they operate in.

“This transaction also reflects our world-class structuring capabilities, which allow us to meet the needs of different industry players and deliver bespoke solutions.”

You’ll find more information about sustainability and the technology that support it at CommBank Foresight, insights for future-facing businesses.