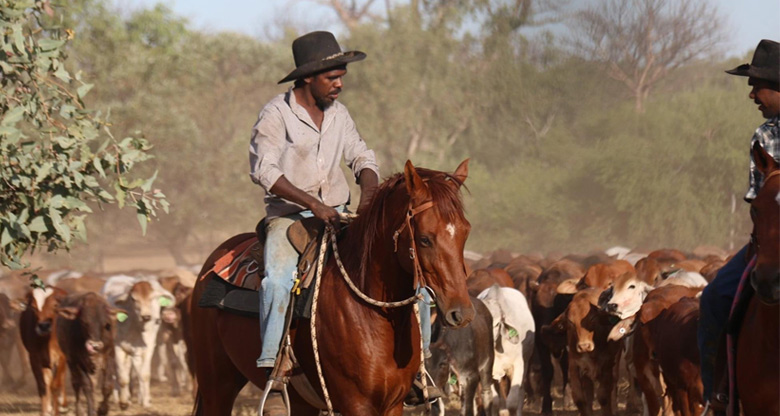 Leveraging business success for a better future for Indigenous Australians

Traditional Owners of valuable cattle country are running profitable stations while unlocking opportunities for meaningful participation in the Australian economy for their communities.

Across the vast expanses of northern Australia, the days are long, the heat is unrelenting and the dreams are big. For the team behind KAPCO, an Indigenous-run agricultural cooperative, the dream is one of opportunity, empowerment and economic participation for First Nations people – and it’s rapidly becoming a reality.

KAPCO is the Kimberley Agriculture and Pastoral Company, which oversees the operation of four huge pastoral stations in northern Western Australia. It is the largest single Aboriginal pastoral business in the Kimberley, responsible for more than 750,000 hectares of country – that’s three times the size of the ACT.

Business success is just the beginning

The agribusiness operation is, in large part, a means to an end.

As Robert Watson, director of KAPCO and chair of the Walalakoo Aboriginal Corporation which was granted the pastoral lease of Myroodah Station in 2019, says, the real goal is to create pathways for Indigenous people to participate fully in the Australian economy.

“We’ve always been put into boxes, and trained for jobs that provide low level skills but no real career pathway,” he says. “Being an active part of the economy is the only way for us to truly help lift communities out of poverty.”

Time to do things differently

Robert believes this is largely a result of programs that were never designed to support meaningful careers and business opportunities or to build broad community capacity. Robert is an example of exactly what he is talking about.

“I’ve always been a cattleman, but I never learned about the business, never learned how the pieces all fit together, and that’s what we are trying to do now.

“Our people have been the backbone of the pastoral industry in the Kimberley. We want to put Aboriginal people in the driver’s seat so we can create economic independence for ourselves on our own Traditional Lands. We don’t want to be reliant on government funding, we want to create our own jobs and our own opportunities.”

Driving value back into communities

Training and work opportunities at KAPCO are designed to filter back into communities, beyond the boundaries of the four properties. People may first take on a simple role, but the goal is always to build them up. Some of the biggest successes come when someone leaves their KAPCO job.

“What happens is that people come and work for us, then they leave and create their own contract business in fencing or maintenance or any of the countless tasks that are necessary at a large station. They come back to us as contractors, and they take on employees of their own. That model builds momentum”.

“‘We’re creating opportunities for the development of microbusinesses, and this is going to change the lives of Traditional Owners.”

Right now, KAPCO has about 30,000 head of stock. With sound management practices in place, the stations are doing very well, with key measures like stock mortality and calving rates looking very positive. Goals for 2025 include doubling the value of the enterprise to $50 million and driving stock numbers to 50,000. When Myroodah Station was first onboarded to the KAPCO model in 2019 it was operating at about 50 per cent capacity, but KAPCO believes it will eventually employ more than 200 Aboriginal people.

“KAPCO is the culmination of nearly 20 years of work by Indigenous leaders to create not only a successful agricultural enterprise, but a social enterprise that can enable meaningful employment for Indigenous people. Ensuring the stations are well run and profitable means we can leverage that success to create more and more opportunities for our people.

“Plus, it’s a model that could be implemented in other parts of Australia.”

Looking for a partner to help with your Indigenous business idea? Visit https://www.commbank.com.au/corporate/industries/indigenous-banking.html

Interested in reading more about the economy, technology and sustainability? Visit CommBank Foresight for the latest data, research and insights for future-facing businesses.