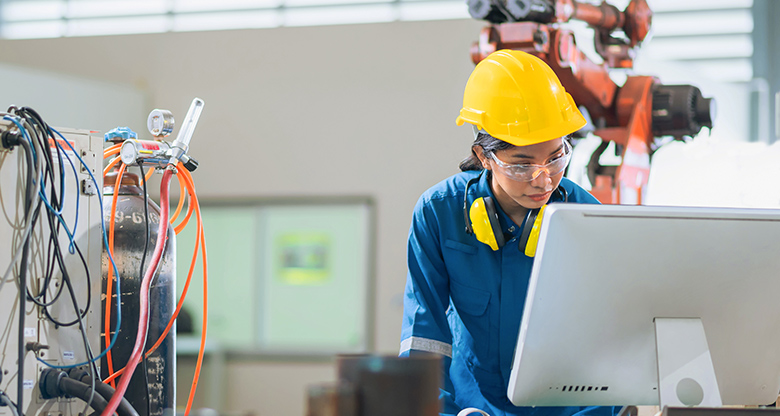 Significant advances in computational power and robotics are being applied to large-scale manufacturing processes with outstanding results. Our experts explain how.

Artificial Intelligence (AI) has many entry points into manufacturing and is transforming processes along the production line. It’s transforming how manufacturers think, innovate, operate and deliver.

The technology is driving efficiency, cutting costs, identifying and delivering on sustainability goals, and developing a larger, more diverse and personalised range of products. From automated mining trucks to a simulated replica of an entire vehicle assembly plant, the existing achievements of this technology are astounding and the opportunities boundless.

Fabio Ramos is Professor of Robotics and Machine Learning in the School of Computer Science, University of Sydney. He’s currently working in Seattle as a Principal Research Scientist for NVIDIA where he develops techniques for robot learning. He says there are three key developments in AI’s current application to manufacturing.

“When you think about manufacturing, it is about optimising production from a number of possibilities, from your actions,” says Ramos. “You want, in a smart way, to come up with a sequence of actions, of decisions, that would optimise a certain outcome. It’s all about the decision-making process. It is about how to make good decisions.”

Since the 1980s, data scientists have been investigating how to make AI systems make smarter decisions. The amount of computation at their disposal today is much greater and that means AI techniques can be applied to a larger number and variety of problems.

An area that data scientists thought would be impossible to solve in our lifetime is the idea of reinforcement learning in machine learning using a reward system. Be it a child, an animal or machine – we see that the system can learn by itself. A toddler’s brain releases a signal that rewards the child for taking that first step.

“Similarly, we can make machines learn by giving them tokens when they do good things. We don’t need to teach a system how to act anymore, the system can learn by itself by receiving these rewards from tokens, from the environment,” explains Ramos.

“’If you accomplish that, I’ll give you a little signal’. At the end of that period you should have developed what we call a policy, which is how a robot acts when it faces a particular scenario. If it acts in that way it will maximise the reward. This is development number two: scaling this reinforcement that allows machines to learn.”

Development #3 - Train in simulation, deploy in the real world

The third significant development in AI in manufacturing connects the first two. “It’s unfeasible to try these techniques in a real world environment and let it run forever,” says Ramos. “We cannot make this robot learn in the real world but we can do something more interesting: we can create worlds that are as accurate as possible to the real world.”

Once they are good enough, the robots are first applied to a restricted real world environment where they are observed and adjusted until they are ready to work well in the real world.

“Train in simulation, deploy in the real world. That’s the third main thing we’re seeing today in AI and so on to scale an another level,” says Ramos.

One of the largest applications of this simulated environment is a replica of BMW’s German factory. Its entire manufacturing process has been replicated in the United States and scientists can observe assembly bottlenecks, determine where to deploy more robots and test worst case scenarios. It makes planning the factory of the future so much easier, cheaper and more prescriptive.

A specific application of AI in manufacturing is machinery and equipment management. These capital expenditures are among the biggest investments manufacturers make.

Luiz Pizzato is Executive Manager, AI Labs at CommBank. He says AI is enabling vast improvements in the way machinery is managed as it more accurately tracks every step in the manufacturing process, identifying equipment and production downtime that can be turned in greater efficiencies.

Pizzato says AI enables smarter equipment management by shifting from a responsive and regular maintenance program to a predictive and prescriptive model – that removes the guesswork and the business-as-usual approach in favour of a data-informed model that predicts when a given machine will need maintenance.

“By combining sensors and machine data with artificial intelligence, maintenance managers can quickly identify both imminent failures and provide predictions of when failure may occur.”

Ramos says innovation is coming at an unprecedented pace within the field. “And now in this world of simulation human can be part of it with things like headsets. It is really phenomenal what we can do.”

Fabio Ramos is a Professor of Robotics and Machine Learning in the School of Computer Science, University of Sydney and a Principal Research Scientist at NVIDIA. He received a B.Sc. and M.Sc. degrees in Mechatronics Engineering at University of Sao Paulo, Brazil, in 2001 and 2003 respectively, and a Ph.D. at University of Sydney in 2008. From 2008 to 2010 he was an ARC postdoctoral fellow and from 2012 to 2014 an ARC DECRA fellow. He has more than 100 peer-reviewed publications and received numerous awards. His research focuses on statistical machine learning techniques for large-scale data fusion with applications in robotics, mining, environmental monitoring and healthcare.

Luiz Pizzato is Executive Manager, AI Labs at CommBank. AI Labs is a team that focuses on improving the financial wellbeing of the bank’s clients and society while bringing innovations in AI/ML. Some of the work led by his team involved the detection of financial abuse and weather data modelling. Luiz is a Data Scientist and Entrepreneur with more than 20 years’ experience in artificial intelligence. He has a PhD and a MSc in Computer Science both with focus on natural language processing and information retrieval. He also has expertise in recommender system, machine learning and data mining.
Luiz is an academic at heart with a strong commercially-focused mind. Before joining CommBank, he consulted with clients across a wide range of industries through his private consulting practice and at Accenture where he led an expert team of data scientists and full stack engineers at the Accenture Liquid Studio in solving very hard problems.

You’ll find more information about the economy, technology and sustainability, and how these can improve business at CommBank Foresight – insights for future-facing businesses.