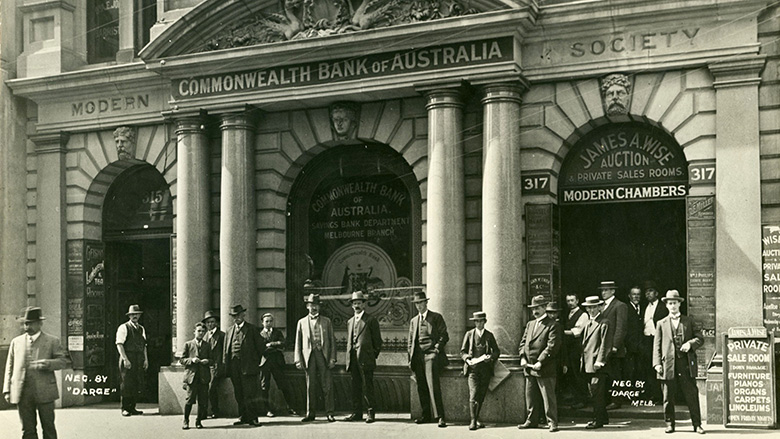 CBA Newsroom looks at the different homes of the bank and what they have come to represent throughout our 110-year history.

In foregone years, the head offices of major financial institutions like the Commonwealth Bank represented the very public face of strength, stability and security.

Buildings such as 120 Pitt Street, Sydney – known nationally as the “Moneybox” after the children’s savings boxes that were modelled on it – literally and figuratively symbolised the peoples’ trust in the bank. In turn, that symbolism lay at the heart of the bank’s reputation.

Nothing – either from the outside purview or the inside workings – was seemingly allowed to disturb that perception. And anything that sought to, whether it was war, economic crises, or political upheaval, was held at bay by the building’s granite-like façade, much like the sea hammering against hard-forged coastal defences.

The first permanent head offices of the CBA duly reflected and projected that strength, particularly in the bank’s earliest days.

So utterly intertwined with the creation of the Commonwealth of Australia after federation in 1901, the bank also underpinned the very foundations of the new nation on several important fronts - financial, economic and social.

If the bank was seen as solid, strong, stable and secure, so would the country. It was little wonder therefore that CBA’s head office came to represent all of those virtues.

Today, 110 years after the bank came into being, the need for such imposing, hard-edged qualities is considered to be less visibly apparent. But design and a building’s “look” still say a great deal about a company’s ambition and what it stands for.

In today’s increasingly digital and environmentally-conscious world, where a premium is affixed to innovation, flexibility, efficiency, and creativity and where buildings need to be highly adaptable from a technological perspective, the emphasis now is on adaptability and responsibility.

The need to make a statement is still there, it’s just expressed in different ways and is more suited to the times we live in.

It was both appropriate and practical that the first main office of the newly-formed Commonwealth Bank should be located in Melbourne.

The capital of Victoria acted as the capital of Australia as the new Commonwealth Government was based there in its first days (the move to Canberra was some 15 years away).

As a consequence, Modern Chambers at 317 Collins Street (pictured above) was selected as a suitable site for the bank’s primary trading office albeit technically speaking King Street in Sydney was listed as the temporary head office with a nearby site on the corner of Pitt and Moore Streets earmarked to become the permanent base. But that was still a few years off because the CBA didn’t require large premises by the time it officially opened its doors for business on 16th July 1912.

CBA’s first governor, Denison Miller, who had joined from the Bank of New South Wales, was just one of three employees when he started work in Melbourne the month before and by opening day that number had swelled to 12.

The Governor was on hand to greet the first depositor who, for very symbolic reasons, was the Prime Minister, Andrew Fisher, and whose government had pushed through the legislation in Federal Parliament to create the bank. Mr Fisher walked from his office to the first CBA branch at Collins Street to make his deposit of One Pound and was handed by Mr Miller his deposit book which was appropriately listed as “Number One”. He was followed by nine other government ministers who were among a crowd of 30 people that had gathered at Modern Chambers to mark the official opening of the CBA.

From day one, customers could also use a network of 489 post offices which acted as agencies for the bank.

Among the many attributes that Denison Miller brought to the role of Governor was his deliberate and firm view of what the bank represented. There had been banks in Australia since 1817, but the creation of the Commonwealth presented an opportunity to put on the map a truly national institution: a bank for all Australians.

Miller sought to make more than a physical statement: the new head office would be a bold pillar of strength to match any of those elsewhere in the world. That was evident in the innovative and contemporary design of the imposing Grecian Doric-style building that became 120 Pitt Street, influenced as it was by its attic and overhung cornice features that were prevalent in many New York skyscrapers at the time. So recognisable were these to become, that they were incorporated into many of the bank’s subsequent buildings around the country, designed as they were by the same architect, John Kirkpatrick.

As well as new technological developments such as a ‘tele-autograph’ system (a forerunner of the fax machine) and pneumatic air-pressure tubes which moved passbooks and cheques around the floors, 120 Pitt was also a seat of power: on its upper floors were the Sydney offices of the Governor-General and the Prime Minister when they were in town.

Opened in 1916, the building witnessed many of the key financial decisions made during two world wars, economic recoveries and recessions during the best part of the next 75 years.

In World War One, for example, it became the scene of many troop reviews and fund-raising rallies including the sale of war and peace bonds. It also became a national icon in its own right, known as the “Moneybox” as its shape and design provided the inspiration for the original tin moneyboxes that were distributed to children to help them save their spare coins. 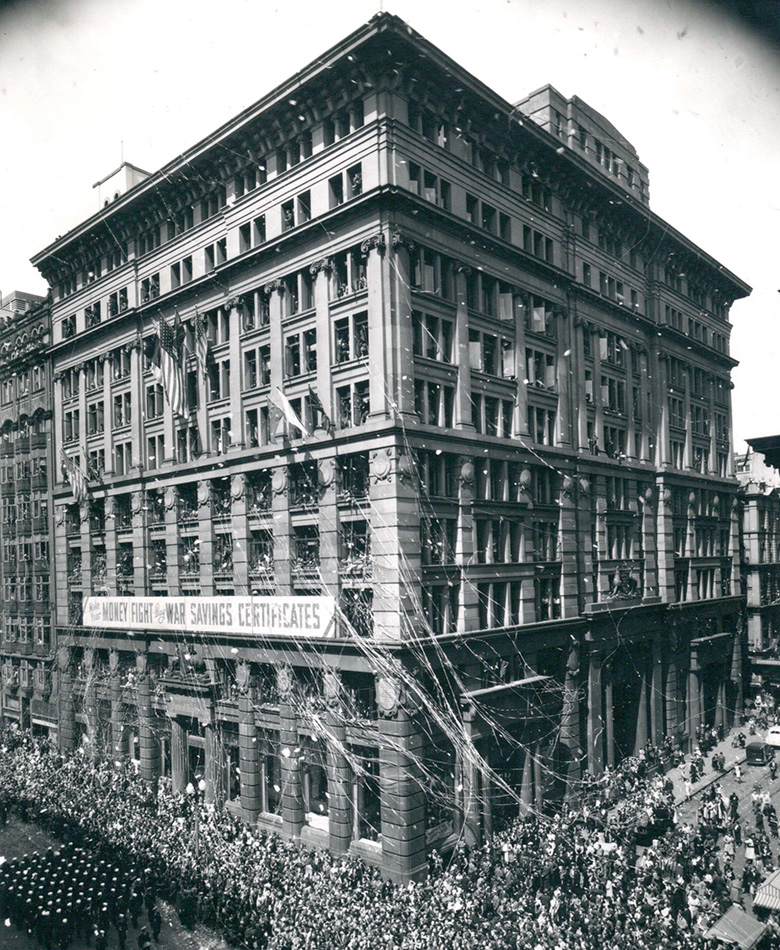 As the bank grew in size and importance so did the need for more space. Two adjoining buildings in Pitt Street were acquired between 1917 and 1919 and incorporated into the new headquarters.

These were subsequently demolished in 1930 and the new addition cleverly integrated into Kirkpatrick’s original design with a central portico and vestibule which included a greatly enlarged banking chamber. Further additions and extensions were made in the late 1940s and mid-1960s to create the most stand-out building in the commercial and financial heart of Sydney: Martin Place.

The National Trust heritage listed the building in 1976, recognising it as a national symbol. A subsequent and major refurbishment after CBA moved out has preserved its exterior revered features.

Across the road from the original “Moneybox” sits arguably an even more grand and impressive building, one that at its time of completion in 1928 made it the country’s most expensive office project. This was the headquarters of the Government Savings Bank of NSW, a state-owned competitor to the savings bank division of the Commonwealth Bank, and whose merger with the Commonwealth Bank had been resisted by the NSW Government at the time of the CBA’s foundation.

Number 48 was an ornate example of the total belief in and the stability of the financial system at the time, one which was subsequently shaken by the stock market crash in the late 1920s and the Great Depression of the 1930s.

This caused the Government Savings Bank (GSB) to collapse which required its rescue by CBA through a merger in 1931.

That brought 48 Martin Place into the group, and its grandiose banking chamber became a branch to more than rival the one opposite in imposing style and form. It remained a branch for the next 50 years with the upper levels occupied by the Australian Tax Office.

By the early 1980s, it was clear CBA’s head office on the other side of Martin Place was no longer suited to the modern rigours and needs of banking, so a $100 million restoration project was undertaken to restore Number 48 to its former Beaux Arts glory as many of its original features had been covered up.

The renovation also saw the installation of modern technological systems for the time to help the hundreds of head office staff go about their late 20th century business amongst the neo-classical style of the 1920s.

After a five year detailed makeover, the building re-opened in 1990 as the latest headquarters of the CBA and became the new “Moneybox”.

It is listed in the National Heritage Estate and has the National Trust’s highest rating with the building considered to be “essential to the heritage of Australia which must be preserved”. 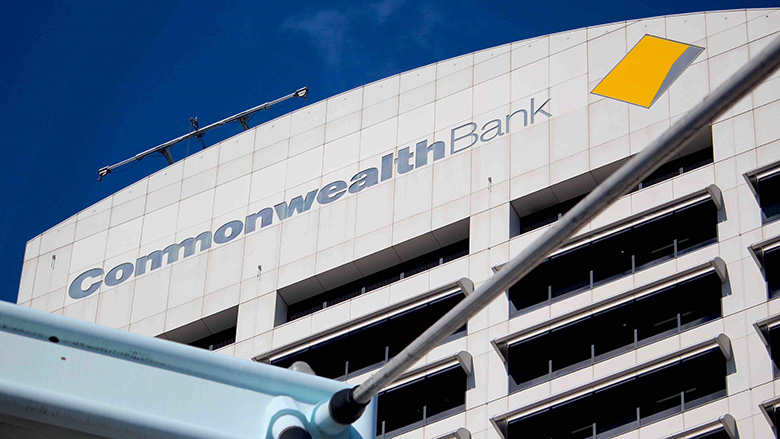 Little more than 15 years after the shift into Number 48, it was already becoming clear with growing technological developments, staff needs, and environmental pressures, that a more modern office with bigger floor plates would be needed to take the group into the 21st century.

The group also wanted to consolidate several sites across the Sydney CBD into two or three while at the same time concentrating its broader Sydney workforce in three key locations in the greater metropolitan area: the CBD itself, Sydney Olympic Park and Parramatta.

Redevelopment opportunities at the western end of Darling Harbour (which would become the site of Commonwealth Bank Place with its mirror-image South and North Buildings) was accompanied by news that Fairfax Media, owners of the Sydney Morning Herald, would relocate to Pyrmont from Tower One at Darling Park, a short walk from the proposed new office site at Darling Quarter as that area became known.

The group saw the benefits of moving into a relatively new 27-storey tower to house its head office functions and, after a major refurbishment to accommodate the environmental, IT and floor space requirements, began moving the first teams into Darling Park in 2009.

Thousands more would move from the central CBD including Martin Place to Commonwealth Bank Place in the Quarter between June 2011 and February 2012.

Ten years from then a refurbished CBP will take its place in the pantheon of buildings that can proudly declare themselves the head office of the CBA: the bank for all Australians. 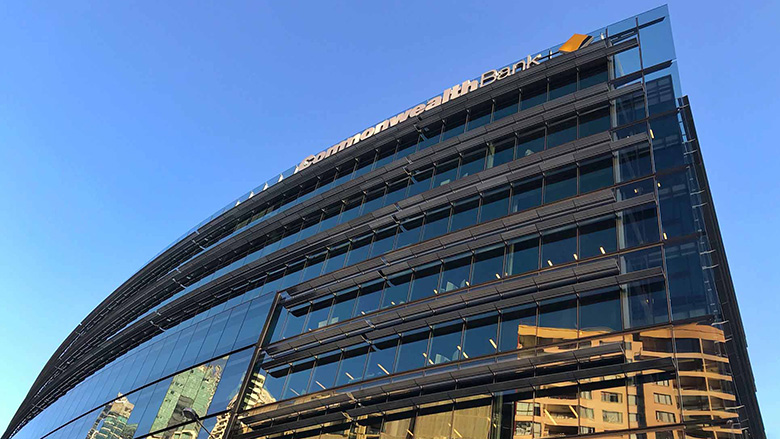