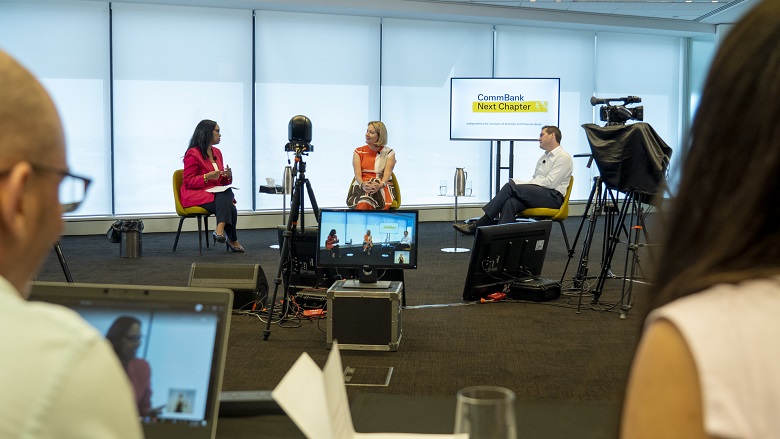 Gender inequality is both a cause and a consequence that leads to domestic and family violence.

To properly address one of Australia’s most alarming societal issues, we must adopt a strong approach to gender equality at an individual and organisational level. This was the key point of discussion at the recent fireside chat, Conscious Inclusion – A Conversation about Prevention, Gender Equality and Domestic and Family Violence, hosted by CBA during the UN Women’s UNiTE 16 Days of Activism against Gender-Based Violence campaign.

The fireside chat was held in support of the UNiTE global theme of Orange the World: Fund, Respond, Prevent and Collect. Present at the chat was CBA’s Group Executive Marketing and Corporate Affairs, Priscilla Brown, as well as Elizabeth Broderick, Chair-Rapporteur for the UN Working Group on the Issue of Discrimination against Women and Founder of the Champions of Change; and Alan Docherty, CBA’s Group Executive Financial Services.

Gender equality was front and centre of the conversation, with the three panellists discussing the important role organisations play in promoting gender-equal beliefs and setting behavioural expectations. The panellists also explored how individuals can prevent violence by supporting those in need and by advocating equality and respect.

“Gender inequality is as much an economic and social issue as it is a human rights issue,” Elizabeth Broderick said during the discussion.

“We should keep this front of mind whether we’re having conversations with our children at home, or discussing workplace policies with colleagues.”

Alan Docherty, who runs We Can – CBA’s taskforce committed to promoting gender equality – confirmed this is an imperative for the bank at an organisational level. We Can works across the bank, diagnosing problem areas to be addressed and securing equal opportunities in the workplace.

After achieving its goal of 40 per cent female representation in executive management roles, the Bank is now working towards its 2025 goal of 47 per cent to 50 per cent of women in leadership roles, while reflecting those who identify as non-binary. We Can also raises awareness and support for employees who are experiencing domestic and family violence, something that has been particularly prevalent this year.

On this topic, Ms Broderick acknowledged during the discussion how important it is to garner ‘psychological safety’ in the workplace by offering employees a safe environment to open up at work, knowing unconditional support is available.

Priscilla Brown discussed the bank’s Next Chapter program, and the various ways CBA is partnering with sector experts to provide sensitive and effective solutions to those in need.

Throughout the discussion, all three panellists agreed that collective force was the best way to affect change for the better. As the founder of Champions of Change, Ms Broderick has been responsible for bringing together more than 250 CEOs who then work and learn from each other to accelerate gender equality in the workplace - demonstrating the power of multiple leaders working on mass within their spheres of influence.

You can watch the full panel event below.