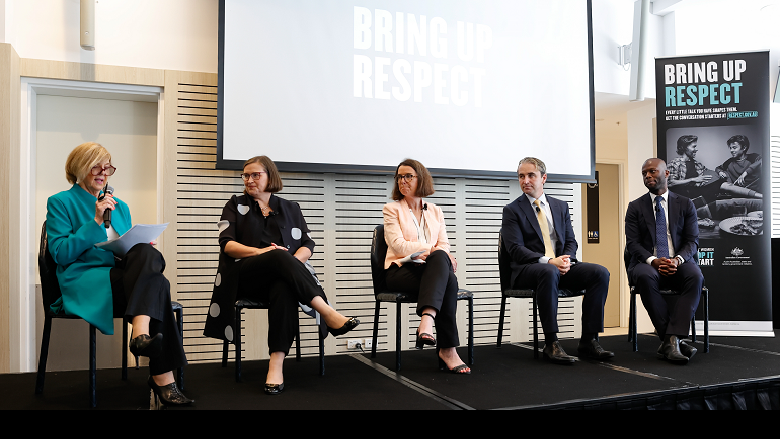 CBA CEO Matt Comyn joined panellists at CommBank Stadium to help launch 'Bring Up Respect', the next phase of the Federal Government’s ‘Stop it at the Start’ campaign.

CBA CEO Matt Comyn took part in the Federal Government’s unveiling of, 'Bring Up Respect', the next phase of its national ‘Stop it at the Start’ campaign designed to prevent violence against women and children.

Launched at CommBank Stadium, the new phase in the campaign encourages people of influence – parents, grandparents, teachers and sporting coaches – to help younger generations understand the value and need for respect.

Speaking about the new phase of the ‘Stop it at the Start’ campaign, the Federal Government’s Minister for Women and Minister for Foreign Affairs, Senator the Hon Marise Payne, said the ads encourage people with influence to ‘play their part’ and teach those they have influence over about respect.

Also speaking at the launch, Senator the Hon Anne Ruston, Minister for Families and Social Services and Minister for Women’s Safety, said the message contained in this new phase of the campaign was a pertinent one.

“Not all disrespect ends up as violence, but all violence starts with disrespect,” Senator Ruston said.

After debuting the new phase of the campaign to a room of community sector partners, Senator Ruston joined Sex Discrimination Commissioner, Kate Jenkins; former Australian football player and CEO of Committee for Adelaide, Bruce Djite; and Commonwealth Bank CEO, Matt Comyn, for a panel discussion moderated by Our Watch Board Director, Kerry Chikavoski, to discuss the strategies government, corporates, community and sporting organisations are employing to help address financial, domestic and family abuse.

In talking about CBA’s contribution, Mr Comyn said the bank had done a lot of work – both internally and externally – to raise awareness of the issue of financial, domestic and family abuse. Internally, he said the bank had put a great deal of focus on respect and the use of language.

“We have trained thousands of our people in real subtleties around body language and tone, and perhaps trying to overcome naivety in some cases, and other cases ignorance,” he said.

“The second part to that is we have been working with thousands of our people through bystander training, which is a very similar arc to the way it was described in terms of this campaign. You have to create the education and then give people the courage, the tools, maybe a bit more of the permission to overcome that hesitation in the moment to say, “Hey, that’s not okay.”

Since 2015, Commonwealth Bank has been working with community organisations and experts to address the issue of financial abuse perpetrated through domestic and family violence. In 2020, the bank extended and expanded its support for people impacted by financial abuse with the launch of CommBank Next Chapter – a program that delivers a range of services, support, resources and research to the market.

Last month, the bank launched a new awareness campaign - CommBank Next Chapter Commitment – which sees CBA, customers and the community come together to end financial abuse by providing tools, advice and access to support services to help individuals recover from financial abuse and establish financial independence.

The new phase of the ‘Stop It at the Start’ campaign will be live across broadcast and print channels in the coming days.