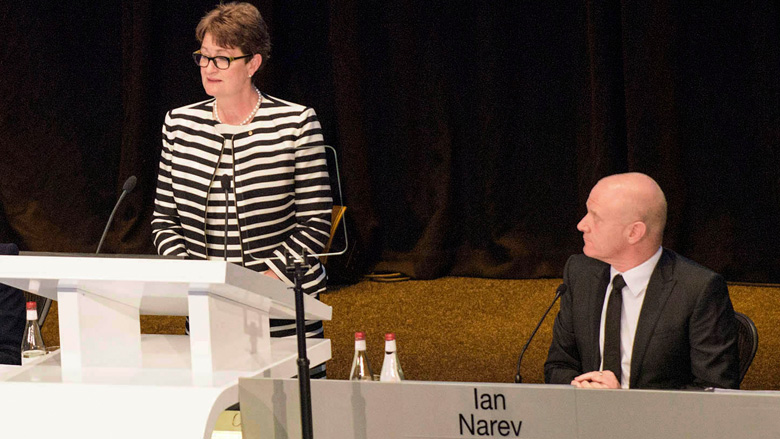 Ladies and gentlemen, it is a great privilege to stand before you today as Chairman of the Commonwealth Bank.

At today’s Annual General Meeting we can reflect on your Bank’s many excellent achievements during the 2017 financial year.

Central to this was the progress on our vision of securing and enhancing the financial wellbeing of people, businesses and communities, and on delivering solid financial performance and returns for shareholders.

The Bank’s net profit rose to $9.9 billion, and this strength of earnings enabled the Board to announce an increased total dividend of $4.29 for the 2017 financial year.

However, our progress and performance have been overshadowed by a range of reputational and regulatory matters which have impacted the Bank. Those matters have generated adverse perceptions of the Commonwealth Bank’s culture and trustworthiness, qualities which are vital for its ongoing success.

So today, I would like to begin by providing you with an update on how the Bank is dealing with the major issues it is confronting; I will then move to matters of Governance and Performance, and close with a comment on the future.

As you know, Australia’s anti-money laundering and counter-terrorism financing regulator, AUSTRAC, commenced Federal Court proceedings against the Bank, on the 3rd of August, in relation to alleged breaches of the Anti-Money Laundering and Counter-Terrorism Financing Act.

Shortly afterwards, ASIC launched an investigation into whether the Bank should have disclosed more information to the market about the AUSTRAC matter before the legal claim was lodged.

Subsequently, a plaintiff law firm launched a class action against the Bank, essentially based on a premise that the Bank had not disclosed information about the AUSTRAC matter sooner.

We will be as transparent as possible about these matters. But, I hope you will understand that while legal proceedings are on foot, there are limits to what I can say today.

What I can tell you is as follows.

These allegations and legal proceedings are very serious, and the Board is treating them with the gravity they warrant.

A special Board Committee has been established, and has oversight of the preparation of the Bank’s response to AUSTRAC’s allegations. This response is required to be lodged with the Court by the 15th of December, and will be made public.

The Board Committee also has oversight of the continuing Program of Action which is focused on ensuring that the Bank complies with AUSTRAC’s current and evolving regulations.

This Program of Action has been underway since 2015 when we first became aware of compliance deficiencies in relation to the monitoring and reporting of certain transactions conducted through our intelligent deposit machines.

If, as part of its work, the Committee finds that further action on accountability is required for parts of the organisation, or individuals, that will also be addressed as a priority, and we will be transparent regarding those outcomes.

In relation to ASIC’s investigation, we are in the process of responding to its request for information.

And in relation to the Class Action, we intend to defend it vigorously: based on what we knew in 2015, and subsequently, the Board believes the Bank has met its continuous disclosure obligations.

The Bank was not aware that AUSTRAC had decided to launch legal action until the civil proceedings were filed on the 3rd of August. Further, AUSTRAC’s Statement of Claim filed on that day included matters of which the Bank had no prior knowledge.

It is also important to stress that there is no suggestion in AUSTRAC’s Statement of Claim that anyone at the Bank knowingly contributed to the matters that have been identified, nor that there has been misconduct on the part of Bank employees.

Nonetheless, it is clear that the Bank was deficient in aspects of its compliance with AUSTRAC’s regulations, and it is equally clear that this has damaged our reputation: with customers, shareholders, regulators and government.

As Chairman, and on behalf of the Board, I apologise sincerely for this deficiency and its consequence.

Shareholders, I can assure you that these concerns command the highest priority of the Board, and we are determined to ensure that our risk management systems, including regulatory compliance, are of the high standard which is expected of us; and that we rebuild trust in the Bank.

Turning now to the independent prudential inquiry announced by APRA on the 28th of August.

This inquiry will review the Bank’s accountability, governance and culture frameworks and practices. It will assess the changes we already have, both in place and underway, and recommend further improvements as necessary.

APRA’s Report will be made public, and will have the independence and transparency needed to reassure all our stakeholders that, where further action is required, it will be implemented by the Bank. We welcome this review and are cooperating fully.

The APRA Inquiry Panel has already commenced its detailed work, with a progress report due at the end of January 2018 and the final report at the end of April.

As shareholders would expect, the Board and our CEO have had ongoing discussions throughout his tenure about the right timing for CEO succession.

After 6 years in the role, and given Ian’s plan to retire within a year, the Board felt it appropriate, in August, to announce the planned succession of the CEO by 30 June 2018.

In the meantime, Ian remains deeply engaged in his role.

However, as this is Ian’s last AGM we thank him for his unwavering commitment to the Bank.  His integrity and service will leave a strong legacy for the future.

In line with good corporate governance, there also continues to be well planned renewal of the Board.

Over the past 12 months, four directors have retired from the Board, including Launa Inman and Harrison Young, two long standing directors, who are retiring today.

On behalf of the Board, I would like to thank them very much for their 6 and 10 years of service respectively.

Andrew Mohl, who has been a director since 2008, and would also have retired today in line with tenure guidelines, has agreed to serve a further year, in order that the Board might benefit from his invaluable experience, as the Bank implements the transition of its life insurance business. This sale should be completed within the 2018 calendar year.

If elected today, Andrew will serve one more year on the Board and will retire at next year’s AGM.

Rob Whitfield was appointed to the Board in September and is offering himself for election today. Rob has extensive experience in banking, including deep risk management skills, and we are delighted that he has agreed to join the Board.

Board renewal is, of course, an ongoing process and we expect to make further appointments during next year.

At last year’s AGM, it was clear that shareholders had significant concerns with the Remuneration Framework proposed for the 2017 financial year.

As a result, and after detailed consultation with shareholders and stakeholder groups, the 2018 Remuneration Framework incorporates many changes, including to the way in which performance is measured in relation to short and long-term variable remuneration, and the applicable deferral period and terms.

The Board has also made it clear that, when necessary, it will exercise significant discretion to reduce or cancel variable remuneration.

The directors also reduced their own remuneration through a cut equivalent to 20% of 2017 Directors’ fees.

The nature of the policy changes made, and discretion exercised, is described in more detail in the Remuneration Report which has been distributed to shareholders as part of our Annual Report, and will be considered under Resolution 3 in today’s meeting.

We have also spent time over the past year evolving our response to the challenge of Climate Change which represents not only a Business Risk, as we have laid out in our Annual Report, but also a responsibility, as we have described in both our Annual and Corporate Responsibility Reports.

We engage with a broad range of stakeholders and we acknowledge the concerns some have raised regarding the role banks play in supporting the fossil fuel industry, in particular the coal industry.

Shareholders should note that our coal funding is comparatively small and has been trending down for some time. We expect that trend to continue over time as we help finance the transition to a low carbon economy.

This is the foundation for our 2017 Climate Policy Position Statement, which sets out our commitment to playing our part in contributing to the Paris Agreement objective of limiting climate change to well below 2 degrees, and supporting the global transition to net zero emissions by 2050.

Our policy will be evolved when the outcome of the Climate Scenario Analysis currently underway becomes available.

Again, we will be discussing this question in more detail when we come to Resolution 5 in today’s meeting.

As well as the changes in Board, management, remuneration, risk management and accountability, major change and transformation is occurring right across the Bank in ways that directly benefit customers.

In September, the Commonwealth Bank cut ATM withdrawal fees, a move that was quickly followed by other major banks. We have also revised branch staff remuneration plans to put customer service first.

Ian will cover these measures and other initiatives in more detail as part of his remarks.

The common theme of these changes is that banking should be easier, more convenient, secure and available at lower cost, and through this we will work to enhance the financial wellbeing of our customers - which is what the Commonwealth Bank is committed to delivering.

Lastly, turning to the performance of the Bank and the future.

As I said at the outset, our 2017 financial performance was very sound, with cash profit up over 4% to $9.9 billion, a return on equity of 16%, and stronger capital and funding, all allowing us to increase your dividend by 9 cents to $4.29 per share, which meant a total return of $7.4 billion to you during the year – that is 3 out of every 4 dollars of the Bank’s profit was paid to shareholders.  We also paid $3.9bn in tax.

The financial performance of the past year, and the improvements in products and services to customers, are two measures of success, but we need to achieve these outcomes in ways that also reflect the values of the Bank.

In this context, our stakeholders extend to include the wider community, legislators, and regulators, and, they too, expect the Bank to act with integrity, and for the Bank to be held accountable for how it conducts itself.

I am therefore personally committed to ensuring that we deal openly with the problems of the past, resolve those issues in the best interests of all stakeholders, and focus on executing our strategy in the face of a rapidly changing competitive, regulatory and technology environment.

I know that all my colleagues on your Board are similarly committed.

In the relatively short time I have served on the Board of CBA I have been struck by the highly evident and tangible pride our staff have in the Bank and the work they do.

As we meet today we are already well in to the 2018 financial year.  Our first quarter result was pleasing, and right across the Commonwealth Bank our people are working very hard to create a better, stronger bank which:

In closing, I would really like to express my thanks to people in many capacities:

I am honoured to serve as Chair of your Board, and for the opportunity to work with Board and management colleagues, to guide the Bank at this vital time.

I will now ask our CEO, Ian Narev, to address the meeting.