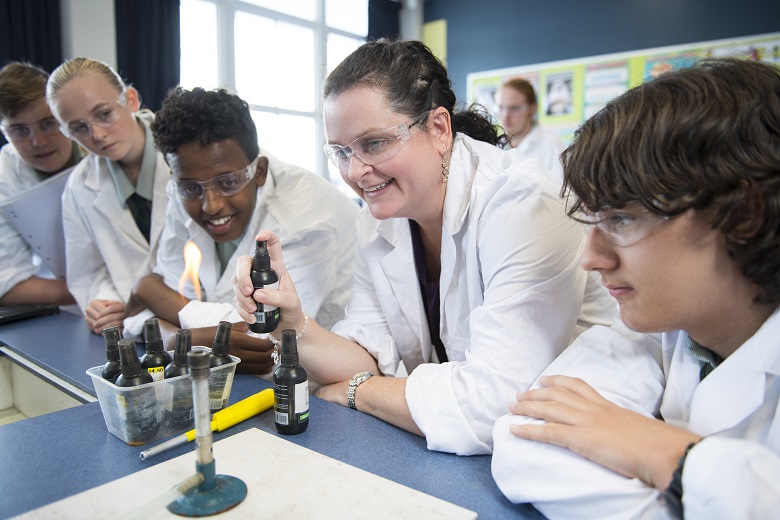 Sarah Chapman’s passion for science education is infectious. With her team, she has built Townsville State High School into a magnet for parents and students who want to be prepared for jobs of the future – jobs which may not yet exist but will certainly require technical skills and scientific reasoning.

Sarah creates connections with other schools, universities, professional bodies and the media to advocate for high quality science teaching, and she is bringing the community along on the mission. The Townsville STEM Hub of 25 local organisations, which she initiated, presents events and competitions to an enthusiastic local audience.

She is also one of 10 inaugural Science and Technology Australia’s STEM ambassadors and she uses this platform to provide an educator’s perspective on influencing policy and the national STEM agenda.

Throughout this demanding schedule she has remained a committed classroom teacher as Head of Science, and students have clearly caught her inspiration. When she arrived at the school in 2004, barely 15 per cent of leavers chose a science-related course; now 74 per cent do so.

Sarah Chapman is a prolific and articulate champion who uses all possible means to promote science education to her students and the community.

The Head of Science at Townsville State High School has led a team that teaches aerospace studies – one of a handful of schools outside Brisbane to do so. She has worked with the ABC to gamify science concepts to make them engaging for young people, and she writes passionately and widely about how to encourage teenagers into studying STEM.

She collaborates with James Cook University to bring her approaches to regional schools and has founded the Townsville STEM Hub, comprising 25 local organisations, that runs science-based community events including robotics and photography competitions. She makes major contributions to the national STEM X Academy, which provides professional development programs for science and maths teachers, and to the Australian Science Teachers Association.  Sarah is one of 10 inaugural Science and Technology Australia’s National STEM Ambassadors, and she has used this platform to provide an educator’s perspective on influencing federal policy and the national STEM agenda.

Despite the extraordinary demands on her time, Ms Chapman remains a committed classroom teacher, taking particular satisfaction from students who are inspired to take up a science career.

As one former student who took up a university place in medicine in 2018 attested: “If it weren’t for Ms Chapman, I would definitely not be on the career path that I am today. In year eight she saw my interest and she built it into a passion. She showed me how I could go on to medicine and push myself further.”

Ms Chapman joined the 759-student school as a graduate teacher in 2004 and has progressively transformed its science teaching, which is now a magnet for parents in the area who want to ensure their children are equipped for emerging careers.

At the time of her arrival, 15 per cent of students applying for university chose a science-based course; by the time her first Year 7 cohort graduated in 2009, the proportion had grown to 74 per cent.

One key to that success has been Ms Chapman’s outreach to local primary schools. She saw that students in the early high school years had too little knowledge of foundational science concepts to be able to engage with more advanced learning.

So she worked with primary teachers to design a more challenging curriculum, and also mentored them around science pedagogy. The learning dovetails into the Townsville High curriculum, allowing students to continue progressing at a consistent rate.

Their results reveal how the approach has succeeded, with A to C pass rates across Years 8 to 11 now averaging around 80 per cent. In Year 12, 96 per cent of students who take Biology, Physics, Chemistry now pass at Grade A to C – up from 55 per cent in 2006.

“The hands-on way I teach, allows students to experience science and learn not only to think like a scientist but work like one,” Ms Chapman said. “I see transformations in students when they realise they can make a difference in the world they live in, and in their own lives.”