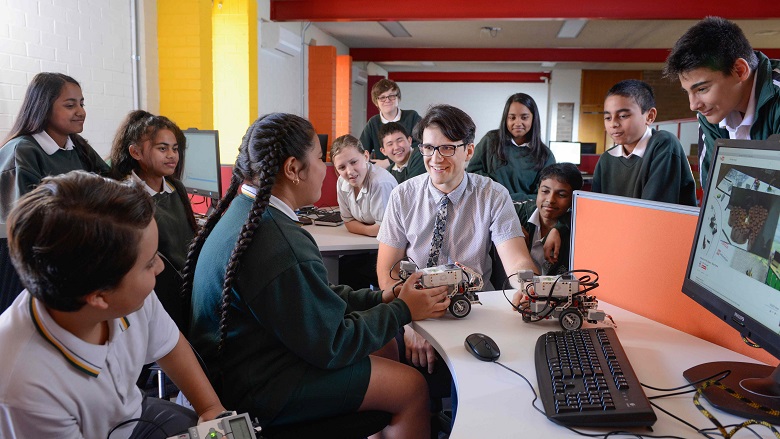 Gen Ys and Gen Zs were the most likely to believe these 21st century skills should be a bigger focus in school. Australians also said schools should spend more time on STEM (science, technology, engineering and maths) subjects.

Conducted to mark the launch of the 2018 Commonwealth Bank Teaching Awards, the survey investigated the classroom subjects and skills that Australians valued most from their time at school, and asked them to consider the most important subjects and skills for today’s generation of school kids. The results were compared with the answers from the 12 outstanding teachers and principals who received the inaugural Commonwealth Bank Teaching Awards in March this year.

While most Australians rated problem solving (69 per cent) and communication (65 per cent) as the most valuable skills they learnt at school, the Teaching Fellows also said skills that improve wellbeing are important for students today.

That’s why many of the programs introduced at the Fellows’ schools focus on wellbeing and resilience to improve student outcomes. For instance, at NSW’s Woonona High School, Principal Belinda Wall’s program aims to lift the life aspirations of Year 7 students and parents in disadvantaged communities. Drawing on the success of a similar program for Year 12 students, it will enable students to become more independent and creative learners and help parents to better support their children’s education.

The survey also found that, when it came to who was best placed to provide kids with skills, more than half of Australians (52 per cent) believe teachers are kids’ greatest source to learn skills that go beyond the classroom.

The Commonwealth Bank Teaching Awards will offer twelve $45,000 Fellowships for teachers and school leaders who are inspiring and transforming the lives of their students whilst preparing them with the skills they’ll need for the future.

Each Fellowship includes $10,000 for the recipient’s professional development and $5,000 for participation in a 12-month fellowship program that includes a study tour to Singapore. In addition, each winner’s school will receive $30,000 to fund a project designed to improve student performance and wellbeing.

“The Commonwealth Bank Teaching Awards recognise the enormous role teachers play in preparing children with the life skills they need for years to come.”

Rosemary Conn, CEO, Schools Plus added; “The skills students need to succeed in their lives and work have changed dramatically over recent decades. Teachers are so critical to building those skills, especially in schools in less-advantaged communities. They deserve recognition for their incredible work.”

Teachers and school leaders from all sectors of the Australian education system – government, Catholic and Independent – can apply or be nominated for the Awards.

Applications for the Commonwealth Bank Teaching Awards are open until October 12. For more information on the Teaching Awards or to nominate for an Award visit teachingawards.com.au.

About The Commonwealth Bank Teaching Awards

The Commonwealth Bank Teaching Awards are run in partnership with Schools Plus, a not-for-profit organisation established in 2013 to increase philanthropy for the schools that most need support. Launched in 2016, the Awards are run annually to recognise and reward 12 teachers across Australia with a $45,000 Teaching Fellowship. The majority of the recipients will be teachers or school leaders working in schools in disadvantaged communities.

The Awards form part of CommBank’s 25-year commitment to improving Australian education outcomes. CommBank has established these because it believes great teachers help children reach their potential. By celebrating the achievements of great teachers, CommBank hopes to elevate the teaching profession and inspire Australian teachers.

As one of Australia’s largest companies, we are committed to making a positive contribution to our customers, communities and the economies in which we operate. Opportunity Initiatives is our corporate responsibility plan to drive positive, lasting change through education, innovation and good business practices. Visit us at commbank.com.au/opportunity initiatives to find out more.

Schools Plus is a national charity that delivers high-impact philanthropic support for schools in disadvantaged communities, to give students the opportunities they need to fulfil their potential. It was established in 2013, bringing to life a recommendation in the 2011 Review of Funding for Schooling (Gonski Review). More than 4,600 schools across Australia are eligible for tax-deductible donations through Schools Plus.