Supporting STEM in Australia with CHIP 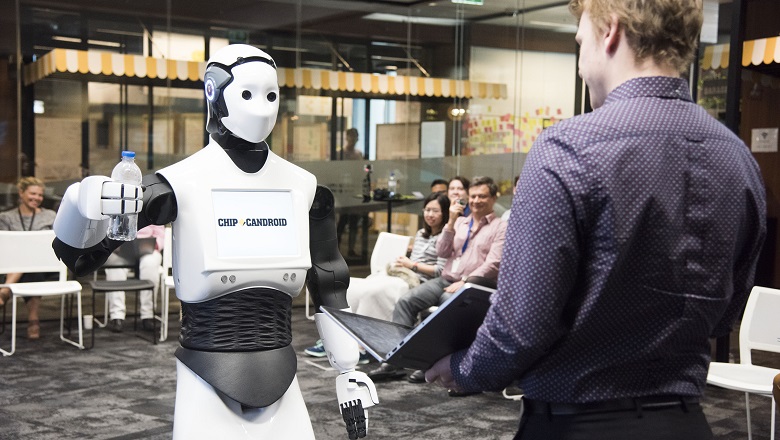 Our Sydney Innovation Lab hosted Australia’s best and brightest minds from leading Australian universities as part of our partnership with the Australian Technology Network.

Commonwealth Bank’s Sydney Innovation Lab hosted Australia’s best and brightest minds from leading Australian universities as part of its partnership with the Australian Technology Network of Universities (ATN), as teams of students presented their research and experience to collaboratively pioneer and contribute to the growing field of social robotics.

Students from QUT, UTS, RMIT, Curtin University and University of South Australia have benefitted from access to world-leading technology in the form of CHIP, the 1.7 metre, 100kg social robot jointly owned by Commonwealth Bank and Stockland.  The students working on their project draw from academic backgrounds including robotics and artificial intelligence, data analytics, IT and engineering; and have worked on high-profile projects with organisations like NASA and IBM, winning multiple awards in Australia and overseas.

Commonwealth Bank’s partnership with the ATN aims to strengthen Australia’s capability in STEM (Science, Technology, Engineering and Mathematics) and understand the impacts of social robotics and other disruptive technologies on people, customers and industries across Australia.

James Bauermeister, PhD student from UniSA and ATN project mentor, said: “When you move your arms, the robot responds in real time with real life movements. Because anyone can use the VR technology, anyone can control CHIP and we think that’s a really exciting and engaging experience.

“CBA’s partnership with the ATN enabled us to work with cutting-edge technologies that would have otherwise been totally inaccessible.

“There are so many use cases in industry – robots entering remote or dangerous zones, or being pre-programmed to carry out repetitive actions. There’s still a lot of refinement needed, but we’re really proud of how we’ve been able to incorporate all of CHIP’s body movements to create a unique experience,” Mr Bauermeister said.

Leroy Clunne-Kiely, Masters student at RMIT and ATN project mentor, said: “We want to consider if CHIP could be programmed to provide one of the hundreds of tours of CBA’s Innovation Labs and immediately came across the problem that CHIP doesn’t have central intelligence in how he operates.

“Our three main challenges were to get CHIP to speak and respond, create a pose library of natural poses and combining these two things together. We have been coding almost non-stop for two months and we’re proud of what we’ve managed to do and interested in how our fields of study cross over with robotics.

“It’s really encouraging to work in an ambitious tech environment within Australia that is so supportive; and this project has really emulated the positive aspects of innovative and tech-forward areas like San Francisco that is attractive to young engineers,” Mr Clunne-Kiely said.

Because social robotics requires robot interaction with people in social spaces, students will run experiments and research using CHIP in real environments, including the Innovation Lab as well as within a Stockland shopping centre later this year.

CBA Innovation Solutions Manager Will Judge said “The field of robotics has really accelerated in recent years, combining with other trends such as virtual reality and artificial intelligence. Commonwealth Bank and the Innovation Lab believes social robotics has huge potential to change and improve the way our customers live.

“The progress these students have made with understanding CHIP’s capabilities and programing real use cases in such a short time is truly remarkable and extremely pleasing. This level of acceleration in CHIP’s ability would have not been possible to achieve on our own.

“Our partnership with ATN, UTS Magic Labs and Stockland is an example of how much can achieved when common goals are shared and collaboration across industry and academia are established,” Mr Judge concluded.

ATN Executive Director Renee Hindmarsh said the partnership is a fantastic opportunity for students to be at the forefront of technological advancement as well as focusing on the real and emerging needs of industry.

“ATN students excel in their careers because of the real world practical experience they gain throughout their studies. This program has given our students the opportunity to access Commonwealth Bank’s state-of-the-art innovation lab, develop unique technical skills in robotics, and connect with a national network of leading robotics experts and high achieving students,” Ms Hindmarsh said.

Both the ATN and CBA are excited to see how this partnership continues to evolve and collectively how we continue to grow the knowledge base of social robotics in Australia.

As part of its commitment to delivering innovative thought leadership and practical solutions to its clients, Commonwealth Bank established a social robotics team in May 2016.

Commonwealth Bank Innovation Labs were first launched in 2014 and are designed to incubate and accelerate ideas to help the bank’s clients address market and technology changes, challenges and opportunities.