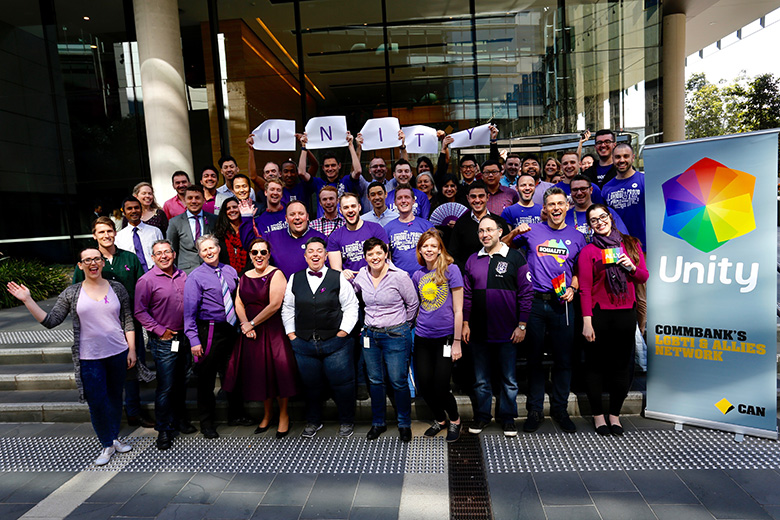 There's more we can do to build a more inclusive community.

In December, Australia finally achieved marriage equality, but let’s not get complacent. There’s a lot more to do. Building a more inclusive community starts with us.

For David Brine, Head of Change & Communications, Sustainable Change at Commonwealth Bank, the marriage equality vote was validating. “There's nothing forcing LGBTI people to get married, but they now at least have the same options as the rest of the community”, he says.

Nicole Brennan, Executive Manager Productivity, says we can’t be complacent. “There are assumptions we can relax now, but 38 per cent of the Australian community voted 'No' to exclude LBGTI people from having equal rights. The job of gaining acceptance isn’t done yet”.

While they play down their roles on the Same Sex Marriage campaign last year, David and Nicole were pivotal in shaping the respectful marriage equality campaign for 'Yes', drumming up support through the employee network Unity, of which David was a founding member and Nicole now co-leads.

“We may never know how our actions influence or inspire others but never underestimate the power of your reach when you are relatable, genuine and are not afraid to challenge the status quo,” Nicole says.

Unity has now turned its attention to improving the customer experience for transgender and gender diverse customers. We know that driving small but important changes that demonstrate our understanding is key to our customers within gender diverse groups. Ensuring things like a customer title on a credit card match our customer’s needs is a small change that we can make that in turn, makes a meaningful difference.

David and Nicole were recently named on Deloitte and Google's Outstanding 50 LGBTI Leaders for 2018. They follow in the footsteps of Commonwealth Bank's Andrew Hall and Brendan French, who were named on the list in 2017.

The awards are designed to further develop workplace inclusion and create role models for LGBTI employees.

“It’s humbling, because the work I do isn’t about me, it is about all of us in our workplaces, people need to be their authentic selves” says David.

Nicole said she felt oddly overwhelmed. “It’s made me reflect on the impact I’ve had – not only on my colleagues, but outside of the organisation too.

"I clicked on a social post where there was a link to a Google Blog about the Outstanding 50 LGBTI Leaders event. My photo was featured in the blog. I may use my Google fame to get out of washing the dishes!”