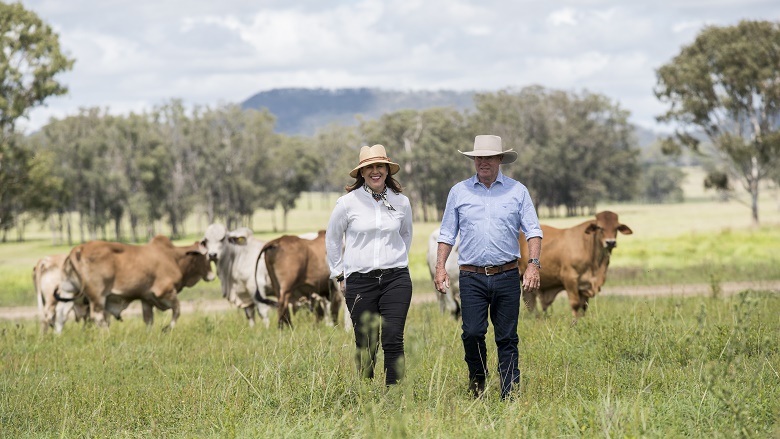 Investment in beef enterprises accounted for a big slice of agri spending in Queensland last year, with producers signalling continued investment for the year ahead as strong prices continue to deliver good returns, according to new research from Commonwealth Bank.

The latest CommBank Agri Insights research finds 14 per cent of producers in Queensland directed their biggest investment increases to their beef enterprises in the year just past. Of those, more than half (57 per cent) noted the impact of increased input and production costs, but 43 per cent said they boosted investment because their return on investment was strong and the prices were high. In the year ahead 24 per cent of beef producers nationally plan to expand their enterprises (with 14 per cent to decrease).

Commonwealth Bank General Manager Regional and Agribusiness Banking for Queensland, Kerry McGowan, says Queensland producers are more focused on boosting their operational output rather than looking to expand their footprint.

“The cattle outlook is very strong and producers are seeking to capitalise on this, though there is still some focus on balance sheet repair where graziers are recovering from drought, so we could see even stronger investment plans if we get another solid season,” he says.

“Right now we’re talking to a lot of producers who are investing in energy efficient machinery and equipment as they work to contain costs and drive efficiency. In fact, CommBank has seen more farmers in Queensland than anywhere else take up energy efficient financing, which is unsurprising as producers in the state have always been early adopters.”

Agri Insights research finds that one third of Queensland producers are looking to increase investment in technology and innovation in the coming year (33 per cent), compared with only 24 per cent this time last year. Just four per cent of Queensland farmers plan to decrease their investment in tech and innovation. The main driver for this increased investment is a desire for the latest tech (39 per cent) closely followed by potential improvements in productivity and efficiency (34 per cent).

“Queensland producers are looking to the future of their businesses and the industry. We’ve spoken to livestock breeders who tell us that they’re looking at tech and innovation to improve breeding production rates and producers who are installing hydraulic crushes, solar panels and remote monitoring. There’s a lot happening in the agri innovation space,” Mr McGowan says.

While beef and livestock more generally looks promising, challenging seasonal conditions at the time of the survey impacted grains intentions, with 20 per cent of Australian growers saying they plan to reduce their operations while 13 per cent look to expand.

“This year’s winter crop was patchy and overall well down on last year, although rain has brought with it a revised outlook for summer crop,” Mr McGowan says. “Broadly, though, with livestock demanding high prices and offering more production flexibility, we are seeing some easing in grain intentions.”

The Hughes family, at the helm of Malarga Grazing in Queensland, are among a number of graziers working towards answering a question that has beef producers puzzled – why artificial insemination conception rates are so low.

Currently industry rates for artificial insemination sit at a maximum of about 60%, and Cam Hughes and producers like him want to find out why.

Cam runs Malarga Grazing – a Brahman beef operation located in the Wide Bay-Burnett region of Queensland – with his wife Lisa and father Brian. Cam is a member of the Meat and Livestock Australia (MLA) R&D committee. Next year the Hughes’ Blairmore property will be used as part of an artificial insemination program trial.

This is just one example of Malarga Grazing’s commitment to innovation. Over the past three years the business has been helping an ear tag producer trial different tags and they’ve adjusted their pasture program to improve production outcomes.

Malarga has been in the Hughes family for about a century. In the 1970s, the Hughes family expanded the business to Blairmore at Ban Ban Springs and have since accumulated numerous other smaller properties along the way. All up, Malarga Grazing has about 8,500 cattle, across more than 20,230 ha, not including leased land.

The operation sells an average of 2000 head per year, with strong markets in China, Korea and Japan, though it does chop and change a bit, Cam says. With beef performing so well in the market at the moment, Lisa says the family is taking the opportunity to upgrade the properties.

“We chose to increase expenditure on farm last year. We spent the money on farm improvements, fencing and just things that need doing. We were capitalising on good returns and putting the money back into the business,” she says.

The Hughes family have also started carefully choosing their pasture variety to give them greater quality control. They have planted bisset creeping bluegrass, Rhodes grass and wynn cassia with legumes like Seca stylo. The Hughes are also planning to invest in a new variety of leucaena, a legume fodder crop, to increase production. Where they can’t plough due to the undulating landscape, they aerial seed.

“We have been able to improve the pasture and our seeding processes have helped our carcass weights increase to no end. It has come at a cost, but it has also increased our carrying capacity,” Cam says.

Looking ahead, the focus is to build a resilient and robust business that can ride the ups and downs of farming.