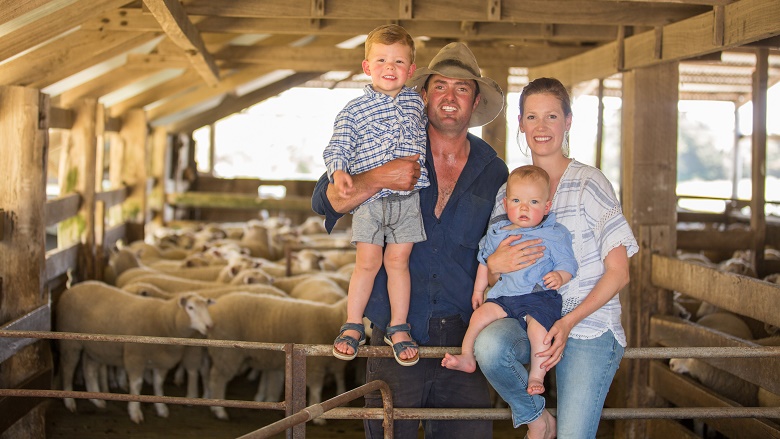 Wool, lamb and beef producers are signalling strong investment intentions for the year ahead, with producers expanding their enterprises or refocusing their farming mix in order to maximise returns, according to new research from Commonwealth Bank.

The latest Agri Insights research shows livestock producers are investing to make the most of pricing and continuing demand, while grain intentions have eased.

“Demand for livestock properties is high with significant interest being shown in some of the quality properties coming onto the market,” Ms Greenwood says. “Livestock intentions are bringing both buyers and sellers to market, leading to an expectation that demand will exceed supply.”

“Cropping margins require tight management and those who are not in a position to diversify are looking for other ways to manage both yields and pricing expectations,” Ms Greenwood says.

“While yields this year will be mixed across the state, the overall picture is good for South Australia, with continuing strong investment intentions in technology, infrastructure and education.”

In reviewing past investments, there was a strong emphasis on investment in fixed infrastructure, plant and equipment, with 39 per cent of South Australian farmers saying this was their greatest area of investment increase in the past year.

“Maintaining and upgrading infrastructure and equipment is simply critical to farming operations, and after a couple of positive seasons farmers are keen to ensure their operations are optimised,” Ms Greenwood says.

“South Australia continues to be a strong performer in Australian agribusiness, with good access to markets, a reputation for premium produce and good partnerships established for both domestic and export sales. South Australian farmers continue to take advantage of stable or upward prices, lower interest rates and high demand for their products.”

Diversification is the key to longevity for livestock property Coola Station. Located near South Australia’s Mount Gambier region, Coola Station is home to over 15,000 self-replacing ewes and 6,000 cattle across 5,100 ha. To help mitigate the risk of being too livestock-centric, the family implemented a vineyard in the 1990s, which Tom Ellis Jr’s sister, Louise, manages. The vineyard expanded to cover around 105-plus ha in the first five years and in 2013 Louise started her own wine label, Coola Road.

“It’s to minimise risk, but also for succession and to keep the property up and running. If you keep splitting a property between family it makes things hard, so we looked at different enterprises,” Tom Ellis Jr says.

That doesn’t mean that Coola Station, which has been in the Ellis family for five generations, is downsizing its livestock operation. On the contrary, the operation is focusing on increasing production and carrying capacity, with fertile and resilient pasture being an important part of this.

“We do our pasture renovation on an annual basis – it’s a natural rotation. We harvest summer crops and ryegrass, but it’s all for the livestock part of the business,” Tom says.

On average, Coola Station sells around 15,000 lambs per year and around 4,000 cattle, mainly to the domestic market, with both being licensed for export as well. While they are enjoying good returns thanks to high demand for beef and prime lamb, the money is being put back into the business and its “run-of-the-mill operations”.

The solid returns from the beef and sheep industries have also allowed the Ellises to look at off-farm investment. Tom says that farming can be a cash-poor business and by investing off-farm you’re able to get money quickly if disaster strikes.

“It comes down to making it as efficient as we can and making the most of the capital,” Tom says.