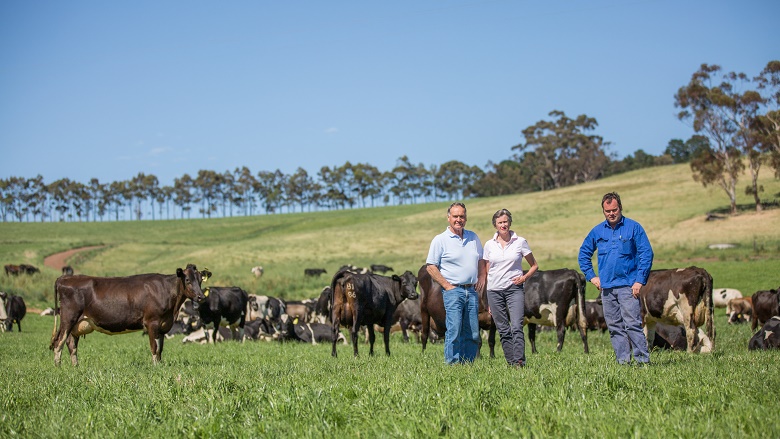 The proportion of Victorian farmers planning to boost investment in innovation and technology has grown sharply over the past 12 months, up 20 percentage points on this time last year according to new research from Commonwealth Bank.

The latest Commonwealth Bank Agri Insights research reveals that 37 per cent of Victorian farmers are looking to increase investment in technology and innovation in the year ahead, with just five per cent planning to reduce investment. This time last year only 17 per cent expected to invest more.

The main reason Victorian farmers are interested in investing in tech and innovation, according to the survey, is to improve productivity and efficiency (42 per cent), and to keep up with the latest advancements in tech (37 per cent).

"For some this is about improved data capture and analysis to give more nuanced insights into operations, especially large enterprises, while for some it’s about increasing the use of genomics in breeding or bringing in EID technology for better herd and flock management. The range of ways farmers are using tech and innovation is vast.”

“There’s a lot of optimism in the market, in part thanks to good livestock prices, and this is driving investment intentions in both tech and infrastructure. There’s still a lot of investment happening in areas like building on-farm storage capacity, which gives farmers greater marketing control and longer term marketing options,” Mr Mohr says.

While the forward focus is on tech and infrastructure, the research shows land acquisition was a key investment area for the year just gone. Thirteen per cent of farmers said their biggest area of increased investment in the past year was in expanding their landholding, which is three points above the national average (10 per cent).

“In some parts of the state land is tightly held so farmers will make quick moves when the opportunity arises, particularly when commodities are doing well,” Mr Mohr says.

Patriarch of the Withnell Dairy Company in south western Victoria, John Tindall, tries to stay on top of the latest technology on the market. He is currently looking at the latest automated heat detection technology to tell him the best time to inseminate his cows, as well as virtual fencing.

“We’re early adopters. We’ve been steadily investing in technology over the past 25 years,” John says. “If there’s something that looks useful and it’s profitable, we’ll invest.”

Currently the operation has a 50-unit rotary dairy and computerised feeding. “The computers feed each cow to her production level,” John says.

“We’re investing in as much automation and computerisation as we can. It reduces pressure to find labour in an environment where it can be hard to come by.”

The original property was bought in 1948 as a soldier’s settlement. John took over from his father in 1975 with 65 cows and just over 89 ha. Now it is run by John, his wife Glenys and their son Lachlan, who is beginning to take over the operation, with John taking a back seat.

Two years ago Withnell Dairy Company expanded into wagyu beef as the Tindalls capitalised on an emerging opportunity.

“Next door was for sale, so I went to have a sticky at it. The agent started talking about the returns from wagyu. I thought about it and bought it. It’s a niche market. Beef prices are at a historical high, but wagyu won’t drop as much when they inevitably fall,” John says.

The total property, including the wagyu operation and some leased land, now stretches to over 1,400 ha and includes 650 milking cows plus 500 dairy replacements and 200 Holstein bull calves plus 400 beef cattle. Last year the Tindalls sold about 300 wagyu calves at 240 kg and John is hoping to expand this side of the business in the future, when the prices ease to purchase more cows.

On the dairy side, the operation Autumn calves and produces 5.2 million litres per year. It has seen an increase from 5,000 to 8,000 litres per cow over the past five years and has gone from milking 500 cows to 650 cows, effectively doubling the business’s production, as well as a dramatic increase in conception rates, thanks to the help of a nutritionist.

More recently, the family has invested in an agronomist who is trialling different grasses at the property to see which is the most suitable as this is a dryland farm.

“We’re a non-standard dairy,” John says. “We use different grasses to the industry and are trying to find which one suits our operation best.”

With a constant eye to the future (as well as a knack for hedging its bets), the business also has a grain consultant who is helping the family invest in grain futures.

“We’re dabbling in grain futures, mainly as insurance for the next drought that hopefully also makes money,” John says.