Tax cuts, higher infrastructure spending, increased asset write-offs for small businesses and a projected return to surplus are the main features of the 2019 Federal Budget, that has the government on track to eradicate net debt by the end of the next decade, according to Commonwealth Bank’s Chief Economist Michael Blythe.

In an analysis of the budget papers released shortly after Treasurer Josh Frydenberg handed down his first, and the Coalition’s last Budget of this government’s term, Mr Blythe said the key fiscal metrics are in good shape with underlying cash surpluses stretching “as far as the eye can see”.

After 10 years of successive deficits since the 2009-10 financial year – then in the midst of the global financial crisis – the Budget is projected to move into surplus with a positive cash balance of $7.1 billion, or 0.4 per cent of GDP, in 2019-2020. On-going surpluses should see the accumulated amount grow to $45 billion by 2022-23. 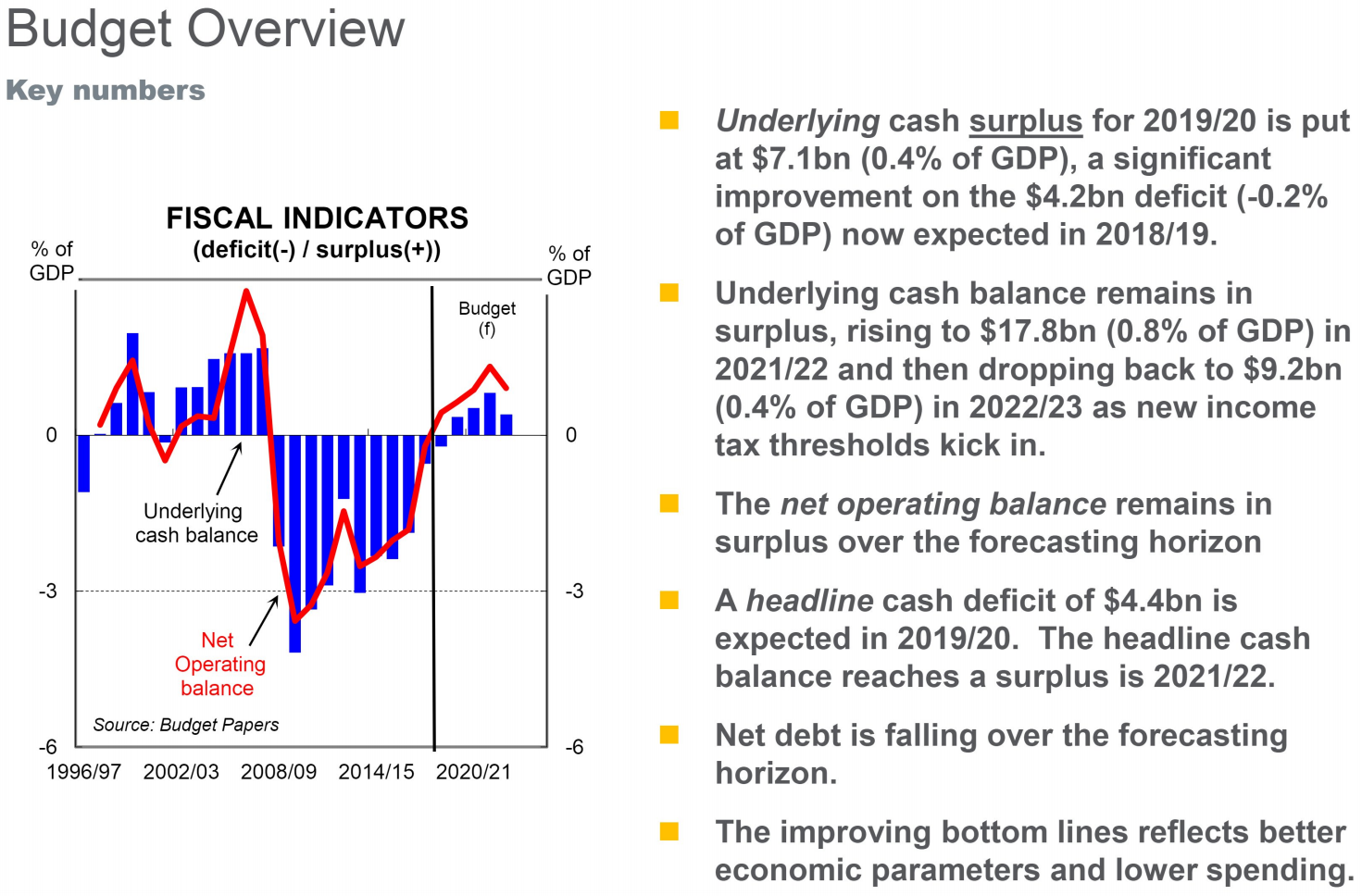 Mr Blythe said an improvement in the Budget’s economic parameters since the mid-year economic statement in December boosts the bottom line by $12.7 billion between 2018-19 and 2022-23. Of this, $10.4 billion has been handed back in the Budget as tax cuts and additional spending. The remaining $2.3 billion has helped to boost the projected accumulated surplus total to the $45 billion figure.

“The policy impact is driven mainly by spending measures costing $8.3bn and revenue initiatives worth $2.1bn over the period,” commented Mr Blythe.  “This outcome is distorted by the fact that some $13.8bn of funding for tax cuts had been buried in the mid-year economic and fiscal outlook figuring.  So the ‘true cost’ of revenue initiatives was $15.9bn.

Mr Blythe points out that the pace of improvement in producing on-going surpluses is a little slower than planned. This is the result of the government’s proposed additional spending on infrastructure, such as roads, rail and other public services.

“Respectable revenue flows are needed to keep the current and future income tax cuts viable,” said Mr Blythe, who highlighted three critical drivers in helping to maintain the funding equation on which the Budget forecasts are based.

Recent improvements in commodity prices have helped deliver additional revenue into the government’s coffers, but the Budget forecasts show nominal GDP growth slowing in the coming financial year - 2019/20 - to 3.25% as these price benefits unwind “relatively quickly”, he said. 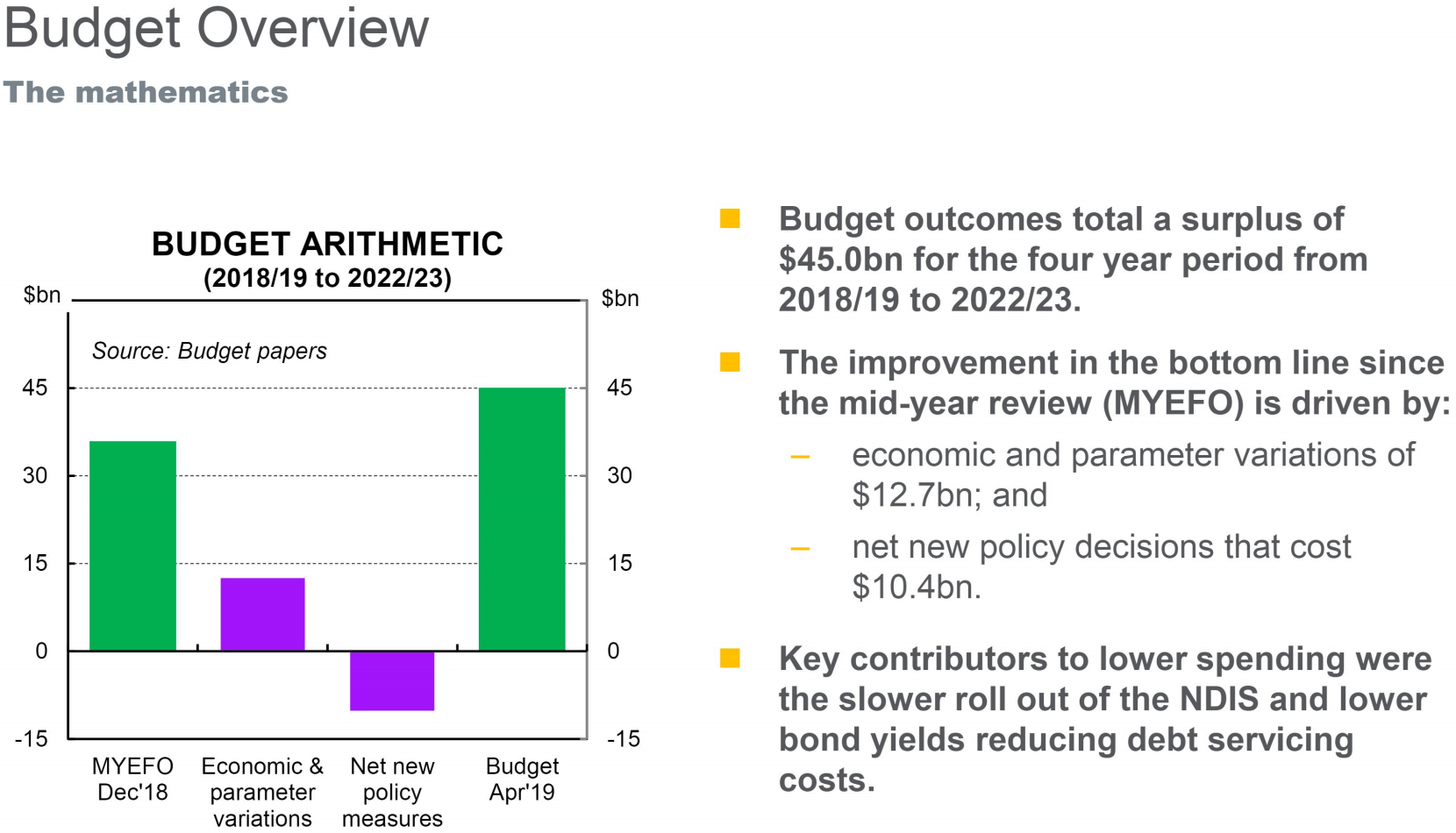 However, if the current healthy prices hold up for another year before falling that could deliver an extra $2.6 billion in tax receipts over the next 12 months from July 1. “From that perspective the forecasts look conservative,” added Mr Blythe.

From a growth point of view, the Budget numbers have built in a period of below-trend economic growth for 2018-19 before returning to trend in the coming years.

The main drivers of growth will be strong public spending – underpinned by the infrastructure boom – rising business capital expenditure, higher resources exports and a lift in consumer spending.

Offsetting that, said CBA’s Chief Economist, would be the downturn in residential construction activity, which is already being seen in Sydney and Melbourne.

Overall, the general shape of the budget forecasts looks reasonable, said Mr Blythe, albeit with some caveats. Specifically:

As for the risks which need to be considered – and which had led to a near-term lowering of the main macro-economic drivers underpinning the Budget - Mr Blythe said these included many and various global factors and domestic issues such as high debt, weak income growth and falling house prices that were affecting consumers. 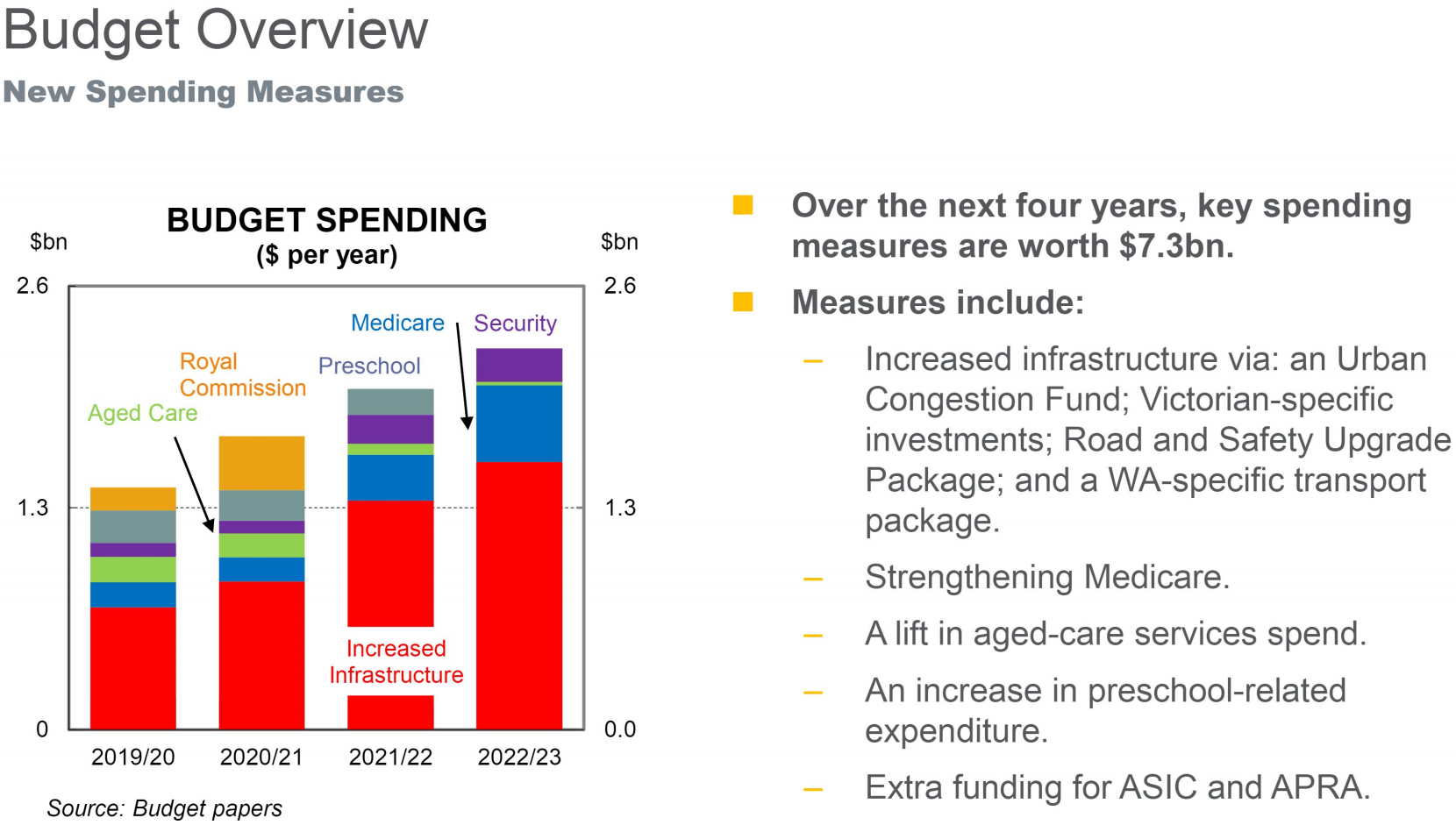 The aim of the Budget was therefore to strike a balance between paying down debt and providing a boost to the economy through tax cuts and additional public spending, he commented.

“The experience of the past decade is the ease with which Budget deficits can return and the difficulty of turning the fiscal juggernaut around. So we have sympathy with the view that the fiscal focus should remain on balancing the books and repaying debt.

“But risks to the consumer outlook are sufficient enough that income tax cuts are necessary and desirable.  We should turn a blind eye to the fiscal consequences for now.”

Who are the CBA 2019 Teaching Awards winners?

Providing women with a pathway into STEM