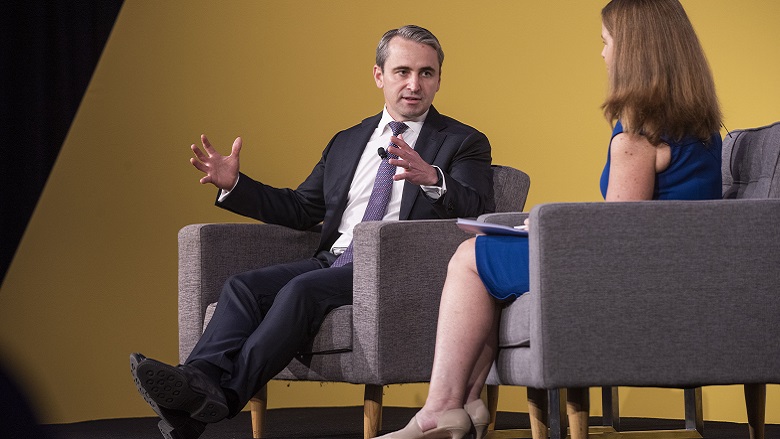 During the hour-long session which was hosted and moderated by Ticky Fullerton, Business Editor of Sky News Australia, Mr Comyn answered questions on a range of subjects the customers themselves nominated in the lead-up to the event. These included interest rates charged on home loans, account fees and charges, the future of the bank’s branch and ATM network, and support for drought-affected regional Australia.

Welcoming customers in person and online, Mr Comyn said the purpose of the forum was to listen to what people had to say, to learn from their experiences with the bank and to answer their questions as best as he possibly could. He also flagged there would be a series of regional forums across the country in 2020.

Ms Fullerton kicked off the session with a question about interest rates, one which she said was “confounding” and top-of-mind for customers and the wider community alike: why don’t the big banks pass on the full cut to the official cash rate when it is reduced by the Reserve Bank of Australia (RBA).

“If I have got a mortgage why shouldn’t I be able to benefit given the RBA Governor has said that the funding should be possible to pass it on?” she asked.

Referring to the three cuts made in official interest rates rate since June where the major banks and most other lenders have passed on a smaller proportion of the 75 basis points in total, Mr Comyn said it was a very fair question he was asked often.

In making decisions on pricing, the bank’s priority was to try to achieve a balance between the differing needs of borrowers and savers, with the latter providing more than two thirds of the funding CBA sources to provide mortgages to home loan customers, he said.

In some instances property investor borrowers with interest-only mortgages received the RBA cut in full, while owner-occupiers with principal and interest loans had seen their rates go down by 57 basis points.

On the other side of the equation was the impact on savers who make up nearly 7 million of CBA’s customers, compared to the 1.8 to 1.9 million customers who have a mortgage with the Group.

“For those 7 million customers, they are constantly saying that they are really worried about the deposit rates,” said Mr Comyn. “Our most popular savings rate, the NetBank saver, we have taken it down 40 of the 75 basis points. For some of our term deposit products, we have reduced it to much less than that.”

Mr Comyn also highlighted the offer of a special five month term deposit at an increased rate of 2.20 per cent per annum in July when the official cash rate was cut by 0.25 per cent. He said this was an example of the balance stuck to help depositors as borrowers benefited from lower mortgage pricing.

Addressing the issue of existing loyal home loan customers who might not enjoy the same deals on pricing as new customers, CBA’s CEO said it was important to be able to offer great service and the best possible price to them so that they are not disadvantaged.

Asked whether customers should contact the bank to see if they were on the right deal, Mr Comyn replied: “Absolutely. We have tried to be much more proactive in the last few years around reaching out to customers and making sure that we are managing some of those differences and of course we have conversations everyday… if at any point in time if you don’t feel you are getting the right rate or are on the right product you should absolutely be talking to us and we should be talking to you. That’s a really important part of that relationship.”

Questions from the floor were also posed on subjects ranging from the bank’s ability to offer higher bonus rates on term deposits, the accessibility and availability of ATMs for people who use cash, and more support for small business customers who have trouble getting loans due to eligibility reasons.

To hear those answers and more, customers can watch and listen to a video recording of the forum here.

The forum is part of a move to step up and listen directly to customers about what’s important to them. It follows the letter Mr Comyn wrote to 8 million customers in 2018 following his appointment as CEO earlier in the year.

The letter explained what the bank was doing to restore trust in the group after past issues that had damaged CBA’s reputation and which led, in part, to the Royal Commission into Misconduct in the Financial Services Industry. In particular, Mr Comyn apologised to customers for the way the bank had let many of them down.

That letter resulted in more than 14,000 replies and prompted the CEO to follow up with another letter in October this year, to update customers on the progress CBA had made in becoming a simpler, better bank as well as improving services and introducing new ones in 2019.

Around 1,800 customers replied to his latest letter and, based on the responses from the 2018 and 2019 communications, a list of the major issues on the minds of customers were compiled for discussion at the forum.

Top of the list with 23 per cent of all responses was why CBA doesn’t match the rates and fees charged by smaller banks followed next by the bank’s decision not to pass on the full amount of reductions in the official cash rate by the RBA. That was the priority of 17 per cent of respondents. Other major topics highlighted were how the bank is demonstrating it is putting customers first (15 per cent) and what changes CBA is making to address the findings of the Royal Commission (12 per cent).

Cyber security, fraud protections, technology changes, support for customers in crisis including drought, the size of the branch network and competition in the banking industry made up the other top subjects.