Highlights of the 2015 Interim Result

2 For an explanation of, and reconciliation between, Statutory and Cash NPAT refer to pages 2, 3 and 15 of the Group’s Profit Announcement for the half-year ended 31 December 2014, which is available at www.commbank.com.au/shareholders.

3 Comparative information has been restated to conform to presentation in the current period.

4 The Group has revised its international measure of CET1 at 31 December 2014 with the methodology consistent with that detailed in the August 2014 PwC Australia report commissioned by the Australian Bankers Association (ABA).

The Commonwealth Bank of Australia (The Group) statutory net profit after tax (NPAT) for the half year ended 31 December 2014 was $4,535 million, an 8 per cent increase on the prior comparative period. Cash NPAT for the half was $4,623 million, also an increase of 8 per cent.

The interim dividend, which will be fully franked, will be paid on 2 April 2015. The ex-dividend date is 17 February 2015. The Dividend Reinvestment Plan (DRP) will continue to operate, but no discount will be applied to shares issued under the plan for this dividend. The Board has decided not to neutralise the impact of the DRP through on-market share purchases.

Commenting on the result, Group Chief Executive Officer, Ian Narev said: “This result again demonstrates the benefits of sticking to a consistent strategy for a high quality franchise. Our ongoing focus on long term strategic priorities – people, technology, strength and productivity – continues to benefit our customers, our shareholders, our people and other key stakeholders. The Group’s revenue momentum has continued, while our focus on productivity has delivered a further $300 million of cost savings over the last 12 months. We have also maintained the strength of the Group’s balance sheet in terms of capital, liquidity, deposit funding and provisioning.

The strength of our business enables us to invest for the long term. In this period, we invested in innovation within the business, with highlights including the establishment of a Group Innovation Lab, digital property settlement (PEXA) and the "Temporary Lock" functionality. We also bought new capability, through the acquisition of TYME, a South African based global leader in designing, building and operating digital banking systems. TYME gives us new opportunities in our emerging markets footprint, as well as providing capability to enhance innovation in our core markets."

Strong deposit growth during the period has seen the Group satisfy a significant proportion of its funding requirements from customer deposits, with deposits remaining at 63 per cent of total funding. During the period the Group took advantage of improving conditions in wholesale markets, issuing $18 billion of long term debt in multiple currencies.

While some of the Group’s customers are facing challenges, this is not translating into a deterioration of credit quality. However, the Group is maintaining a strong balance sheet with high levels of capital and provisioning. Liquidity was $151 billion as at 31 December 2014.

On the outlook for the 2015 calendar year, Ian Narev said: “The Australian economy has many of the foundations necessary to make a successful transition from its dependence on resource investment. Population growth, a vibrant construction sector, some signs of increased business investment, greater trade access supported by a lower Australian dollar and a strong banking sector are all contributing to an economy that remains the envy of most developed markets. However, the volatility of the global economy continues to undermine confidence, particularly the impact of lower commodity prices on national revenue.”

“In terms of the Group specifically, we will continue to invest in our current strategy. We believe that if we continue to work hard in an increasingly competitive environment, our strategy will continue to benefit our 15 million customers, our 52,000 employees, the 800,000 Australia households who own our shares, and the broader communities in which we operate.” 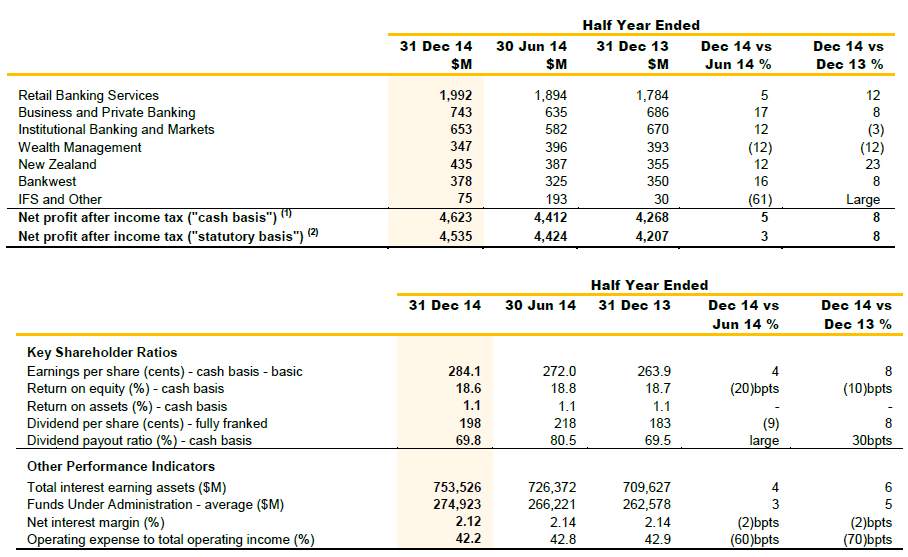