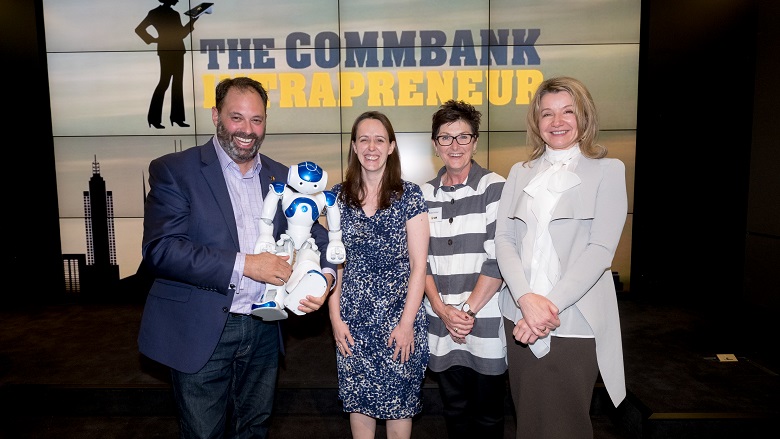 The Commonwealth Bank showcased the best of innovative solutions when four CBA teams presented to The Hon. Philip Dalidakis, Minister for Small Business, Innovation and Trade in an initiative to tackle societal challenges for Victorians.

"Innovation isn't a destination but a journey, and it is great to see the CommBank encouraging their own staff to solve real world problems that people experience every day,” Minister for Small Business, Innovation and Trade Philip Dalidakis said.

The teams were tasked with four key areas: the future of public transport in Victoria; enhancing digital interactions between the Victorian Government and its citizens; improving support for domestic violence victims; and widening access to education across all segments of society.  The four teams within CBA had worked on their problem sets over the summer, coming together from cross-organisational groups.

Julie Hunter, CBA’s managing director for health, education and government, said the event was designed to encourage our staff to be “innovative in their thinking.”

“One of the things we noticed is that many of the best ideas had social impact focus. And on reflection, that wasn’t actually surprising because the Commonwealth Bank strategy for securing and enhancing the wellbeing of people, business, and communities is one that we know resonates very strongly with our staff.”

The first team offered a united vision of public transport in Victoria, proposing a “MyVki” app that would allow public transport users to top up their cards using the app, enter and exit train stations, along with making simple transactions for coffee or newspapers at station-based stores.

The third team proposed an application service for victims of domestic violence, who would be able to access essential life and crisis services in an intelligent and connected way. The team said the Commonwealth Bank had learned from its dealings with domestic and family violence advocacy bodies and service providers while developing its Domestic Violence Strategy over the past 18 months, particularly in that victims of domestic violence often contact these organisations first before anyone else.

The final team offered a solution for education in Victoria harnessing virtual reality (VR), proposing a platform managed by the Department of Education that would publish VR content to help provide premium digital content to all schools and universities so as to help level the educational playing field.

The winning team was Team MasterKey with their concept of allowing Victorians to unlock access to all Victorian Government services with a single login.