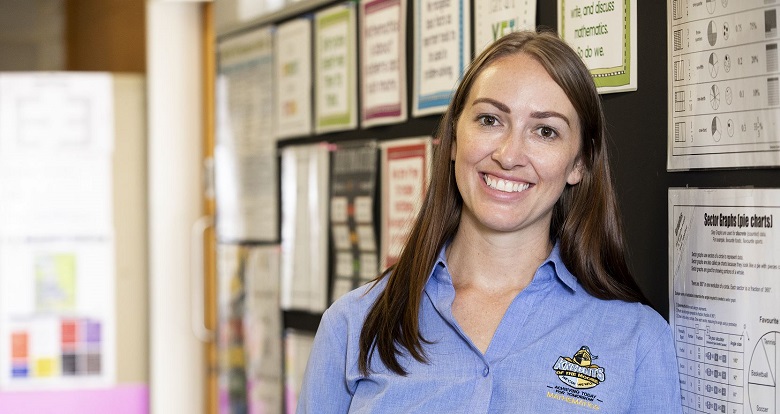 Inspired by a passion for promoting Women in STEM fields, Ashley Stewart is using STEM, problem-based learning and Spatial Training to drive improvement in mathematics at the Newton Moore Senior High School in Bunbury, WA.

The maths Department Head was concerned about the low NAPLAN results of Indigenous students, particularly girls, and she chose spatial training – developing understanding of three-dimensional shapes and movement – as a more practical entry into a subject many found discouraging.

Her instinct proved correct. Along with vastly improved classroom engagement, NAPLAN scores have edged ahead of like schools. Especially pleasing for Mrs Stewart, are the fewer limited achievement grades from 2017 to 2018.

She has also established an inventors’ club, and fielded three teams in the International Mathematical Modelling Challenge, all towards one goal: “to engage students in relevant, meaningful and exciting activities that develop a passion and ongoing interest in STEM professions.”

When Ashley Stewart arrived in 2017 at Newton Moore Senior High School as its new head of mathematics, she noticed several things.

First, the school as a whole was under-performing in maths.

Second, Indigenous students – one in five of the more than 700 enrolment – were falling below the school average, particularly by NAPLAN measures.

Mining and minerals processing are main industries of Bunbury, WA – where Newton Moore is one of four non-private high schools. The sector requires a skilled, numerate local workforce of technicians and engineers, so doing well in maths at school can be a fast track to a good career.

Mrs Stewart wanted her students to be able to take up those opportunities. With characteristic high energy and creativity, she set about developing programs to raise the bar for everyone while ensuring Indigenous students were supported to explore and develop their interest in maths and related subjects.

Her first focus was on spatial training. Three-dimensional understanding is integral to engineering and is regarded as a fundamental cognitive skill, but it is often neglected in crowded maths curricula. Mrs Stewart saw that this training – fitting shapes together and being able to conceptualise movement – might engage students who felt alienated by number problems. Spatial training is also acknowledged to support development in other mathematics topics.

The approach is working. In Years 7 and 9, where spatial training has been rolled out so far, teachers have observed that behaviour has improved as students are more focused on lesson content. The effect has been so significant that Mrs Stewart’s science department colleagues are borrowing some of the strategies in teaching Year 11 and 12 engineering studies.

Mrs Stewart has introduced science, technology, engineering and mathematics programs for Indigenous girls, and has established an inventors’ club. She encourages students to compete outside the school, fielding three teams in the International Mathematical Modelling Challenge – the equal highest number in Australia – including an all-girls team.

She runs learning sessions to enable parents to better help their children with maths, and she initiated a partnership with Singapore Chinese Girls School through which visiting students attend Newton Moore – fostering cross-cultural understanding.

And she collaborates with teachers at feeder primary schools, running workshops and helping them integrate Lego Robotics and EV3 into classroom learning.

It is early days but the innovations are starting to pay off in students’ test results. Internal school assessments show the previously lowest performing students are experiencing the significant improvement. NAPLAN scores overall are now ahead of those for like schools, and Indigenous female students are producing a higher number of satisfactory results – with half of Year 9s demonstrating satisfactory progress in 2018, up from a quarter in 2017.

For the future, Mrs Stewart says, “I would like to extend the reach of these programs to reach across the state, to allow more students, Aboriginal girls and primary students to engage in relevant, meaningful and exciting activities that develop a passion and ongoing interest in STEM professions.”