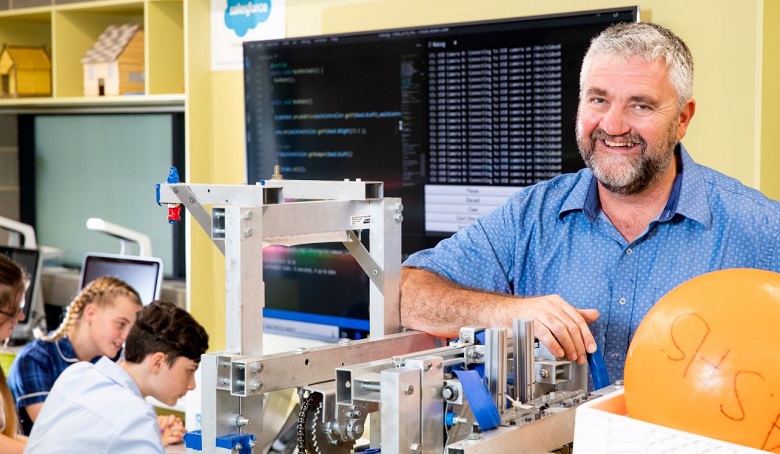 Too many students were dropping high-level STEM subjects at Cecil Andrews College, and STEM Coordinator John Townley was determined that should change.

He created a vibrant robotics program at his school, with a network of 12 other schools all now running Robotics Clubs and competing in FIRST Robotics’ competitions. His network includes Tjuntjuntjara Remote Community School in the Great Victoria Desert.

The inter-school partnership between the remote and city schools is based on inclusion of Aboriginal cultural perspectives in STEM learning. He saw that culture was central to Indigenous young people’s learning, and he thought about how to harness it.

The result: Two-Way STEAM, which integrates Noongar culture and language with hands-on engineering. The first project is construction of remote-controlled racing cars. Co-taught by Elders, students learn about components, develop software skills, and build a track that embodies the six seasons recognised by Noongar people.

What began as a lunchtime activity is now timetabled and making such an impact that John is actively working with other schools to enhance their capacity in STEM teaching.

The STEM Coordinator was concerned at the lack of interest in the subjects he noticed among many students, but most particularly those from an Indigenous background: 24% per cent of the school’s 620 enrolment.

The trouble, it seemed, was that STEM felt too abstract, removed from the reality of the students’ lives at school or in their communities.

So Mr Townley established Two-Way STEAM (2WAYSTEAM), which integrates aspects of local Noongar-Whadjuk culture and language with maths and engineering principles and activities aligned to the WA curriculum.

The first students to test-drive the concept was a group who had consistently truanted and disrupted classes in their first term at Cecil Andrews, at Seville Grove in Perth’s southern suburbs. Mr Townley initially invited them to his engineering lab outside of class time, to gauge their response to working hands-on with electronics.

Based on their enthusiasm, in 2018 he created the first formal 2WAYSTEAM class for Year 7 students. “The deal was, ‘go to other classes, behave well and put in your best effort and I will let you in here at lunch and into the 2WAYSTEAM group’,” Mr Townley said.

The first 2WAYSTEAM project responds directly to the students’ interest in remote control car racing and follows other Aboriginal Culture STEAM work done in recent times at Cecil Andrews with artists and in classes.

Six Seasons Racing is named for the seasons recognised by the local Noongar people. The 12 students built remote-controlled 1/10 scale off-road racing car from kits, learning through the construction about the components and their functions, developing software skills, and working in teams on the season-themed cars. The kits were provided by the Marine School Industries Partnership as the project develops skills for to Pathways to Technology (PTECH) – a schools industry linking program piloted in WA at Cecil Andrews College.

As absorbing and enjoyable as the project clearly is – attendance and behaviour have improved and the program will be extended to other year groups - Mr Townley has an additional objective.

“2WAYSTEAM is also designed to create pathways to college senior school courses and programs in robotics, IT, engineering, business and laboratory skills,” he said. “It is designed to inspire students to believe in themselves, set goals and develop their literacy, numeracy and transferrable skills. The students want to be in the lab whenever they can and now speak about learning and career goals like engineering and mechanics.”

Mr Townley works with teachers at other schools through the Teacher Development Schools program to enhance their capacity in STEM teaching and Digital Technologies Curriculum delivery and more than 200 students outside Cecil Andrews have now attended one of the robotics courses he designed.

He believes engineering team projects are particularly valuable for promoting inclusion and feelings of competence and achievement, and his next goal is to develop programs to encourage students with disability or mental health issues into STEM.