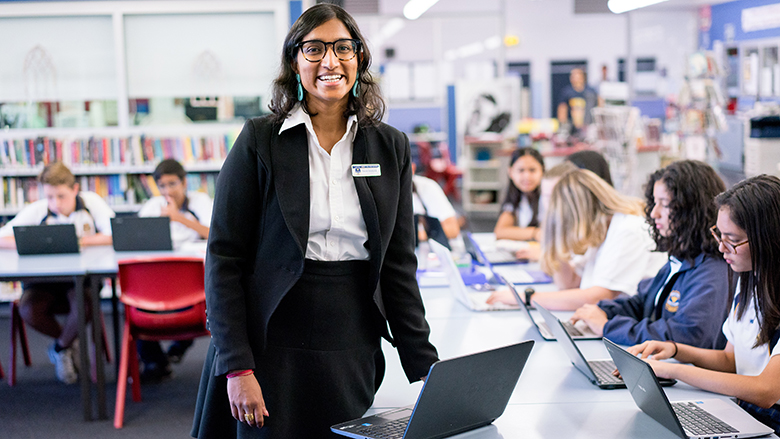 Rising star helps students – and their teachers – prepare for the future.

Feeling like one of “only a handful” of students in her class from regional Australia at an inner-Sydney university was a seminal experience for Yasodai Selvakumaran.

A decade later, the Rooty Hill High School teacher taps into memories of that time to better understand her students, who are from a variety of geographic and cultural backgrounds.

It’s an empathetic approach that’s working for her students, and for Yaso: last year, she was named a "rising star" by The Educator magazine. This month, she takes her place alongside some of Australia’s best and brightest educators as a Commonwealth Bank Teaching Awards Teaching Fellow.

It’s been a stellar rise, and one replete with small moments of triumph.

One of her most rewarding achievements was watching the first cohort of Year 12 graduates from her school graduate from the Australian Indigenous Mentoring Experience (AIME) outreach program at Sydney University.

“The best thing is seeing the change in students between year 7 and year 12. It makes me proud to see them achieve things they never thought they could – and not necessarily academic results,” she says.

Yaso had Aboriginal friends growing up in the NSW towns of Bathurst and Hay, but she knew little about Aboriginal culture until she studied contact and colonial history at university.

“In my second year at uni, I worked as a mentor with AIME,” says Yaso. “This made me want to better understand the issues of inequality in Aboriginal education in Australia.”

Working with AIME ignited a commitment to social justice which led her to make special connections with the six per cent of Rooty Hill High’s 1100 students who are Aboriginal.

Yaso has helped train her teaching colleagues in Aboriginal ways of learning with help from the AFL Indigenous Academy, and has worked with the school to build closer connections and the local Aboriginal community.

Officially, Yaso is a Human Society and its Environment teacher, but she’s also a 'teacher-leader', mentoring and collaborating with colleagues in forums, school visits, master classes and via the Internet.

“I’m passionate about teacher learning and making teachers the best they can be for their students,” says Yaso.”

Enrolments doubled last year in the school’s Society and Culture course after Yaso revamped it.

She was also instrumental in rolling out the school’s ‘Creative Inquiry Cycle’ which inspires students to think critically in the face of an uncertain future. It’s now used as a best-practice case study.

The change in what educators need to offer students to equip them for life beyond school has been monumental during her eight years of teaching, according to Yaso.

"Parents, media and others who pressure teachers over results fail to understand the complexities they must juggle."

During her visits to family in Sri Lanka, Yaso has imagined how her life could have been without formal education. She’s grateful that peace in the once war-torn nation means schools have re-opened.

She never wants another child to miss out on an education.

The Commonwealth Bank Teaching Awards are run in partnership with Schools Plus, a not-for-profit organisation, which was established in 2013 to increase philanthropy for schools that most need support. Launched in 2016, the awards are run annually to recognise and reward 12 teachers across Australia with a $45,000 Teaching Fellowship. The majority of the recipients are teachers or school leaders working in schools in disadvantaged communities.