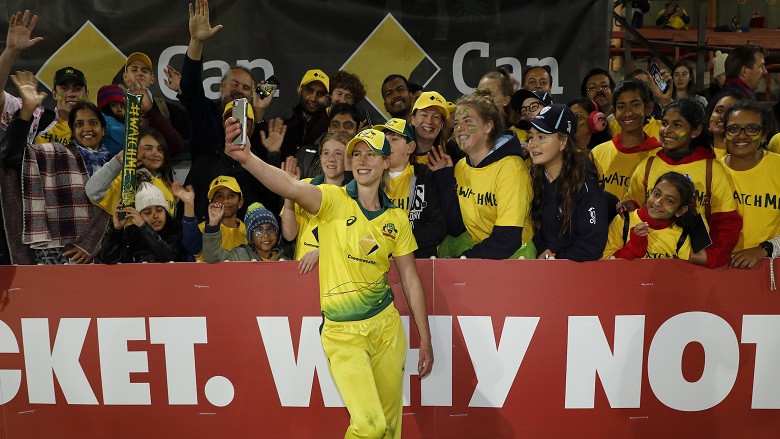 New CommBank research reveals half the nation (53 per cent) are tuning in or attending female sports.

As the Australian Women’s Cricket Team gets ready to square off with New Zealand in the first One Day International (ODI) of the season next week, new Commonwealth Bank research reveals the popularity of women’s sport is soaring, with almost half of Aussies admitting they are more interested than they were a year ago.

The rise of women’s sport

With female cricket stars now lighting up our TV screens, 53 per cent of Aussies are tuning in or attending a women’s sporting match, according to the CBA research.

Increased interest in women’s sport is being driven by greater exposure through TV broadcasting (31 per cent), more positive media coverage (30 per cent) and the rise of high profile female athletes in Australia (21 per cent) – among them is Ellyse Perry, Australian international all-star cricketer.

During the current 2018/19 summer season of Australian women’s cricket, a record 2.5 million Aussies tuned in to the opening T20 women’s league match and televised women’s elite cricket matches have attracted an average national audience of more than 200,000.

Monique Macleod, Chief Marketing Officer at Commonwealth Bank, says: “We’ve been supporting Australian cricket for 30 years and women’s cricket for 20 years now. It’s wonderful to see Australian women's cricket starting to reap the benefits of long term investment, broader exposure and the extraordinary talent of the team to put the game on the map.

“We believe championing diversity in sport at all levels is important to growing women’s, multicultural, Indigenous and all abilities cricket. This will ensure cricket remains a sport for all Australians.”

Ellyse Perry, Australian Women’s Cricket Team all-rounder and CommBank Cricket Ambassador says: “It’s fantastic to see increased support for women’s cricket and I can feel women and girls are changing the game. Increased exposure and continued investment into women’s cricket helps inspire girls across the country, from grassroots to elite, to pick up a bat and ball.”

Despite women’s cricket being more popular than ever, Commonwealth Bank research reveals we still have a way to go when it comes to levelling the playing field. Australians believe the main barriers preventing young girls from taking up sport include the lack of girls teams to join (51 per cent), the perception that certain sports are ‘male’ and girls not wanting to play if their friends aren’t playing (both 50 per cent).

To ensure young girls get the support they need, CommBank and Cricket Australia support the Growing Cricket for Girls Fund to develop new girls’ competitions and grow established competitions. Over the past two years, the Growing Cricket for Girls Fund has supported around 750 clubs, associations and schools, with 73 new girls’ competitions launched and a 288% growth in schools participation across the country.

The most popular women’s sports by state:

About the Commonwealth Bank Women in Sport 2019 Study

The Commonwealth Bank Women in Sport 2019 Study was undertaken by ACA Research in December 2018. Results are compiled from an online survey of 1,023 Australians 18+, with quotas set based on the latest population estimates sourced from the Australian Bureau of Statistics.

About CommBank’s partnership with Cricket Australia

From grassroots to elite female, Indigenous and all-abilities, CommBank’s partnership with Cricket Australia is designed to make cricket inclusive and accessible for all. CommBank has sponsored the Australian Women’s Cricket Team and the women’s development squad for 20 years and during the 2017-2018 season, sponsorship funding will also go towards:

Changing the way we see women in sport