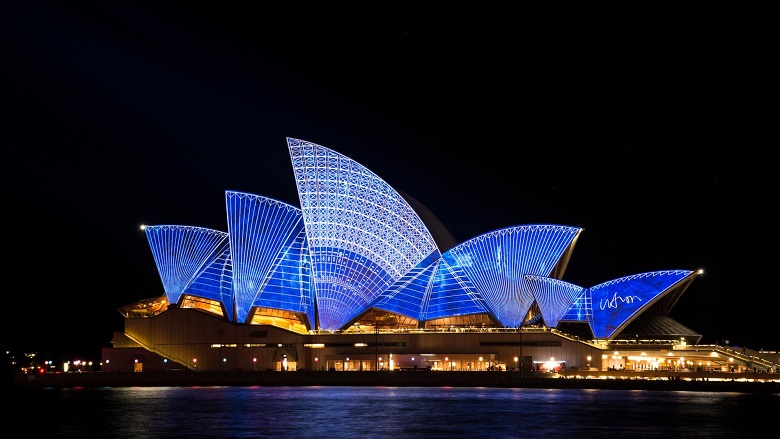 New South Wales extends its lead on most economic indicators, followed by Victoria and ACT, CommSec's latest State of the States report shows.

New South Wales is once again Australia’s best performing economy after retaining its top ranking across most economic indicators while Queensland is showing strong employment growth, according to the latest State of the States report released today by CommSec.

Using eight economic indicators, the online broker arm of Australia’s largest bank assesses the performance of each state and territory each quarter.

New South Wales has been the top performing state for just over three years, with the latest data showing it secured top ranking across five of the eight indicators: retail trade, dwelling starts, equipment investment, construction work and unemployment. Victoria has again come in as the second best performing state after it was once more supported by the fastest annual population growth, followed by the ACT with its annual employment growth at its strongest in over a decade.

And the fastest population growth in six years has helped boost Tasmania’s overall ranking from fifth to the fourth best performing economy, ahead of South Australia and Queensland. Queensland remains in sixth position but with a promising outlook, given that it possesses the nation’s fastest growth in annual employment.

CommSec Chief Economist Craig James said: “As we saw in the last quarter, Australia’s economies are in good shape but it is the two most populous states that lead the way on the back of solid activity in home purchase and construction.” 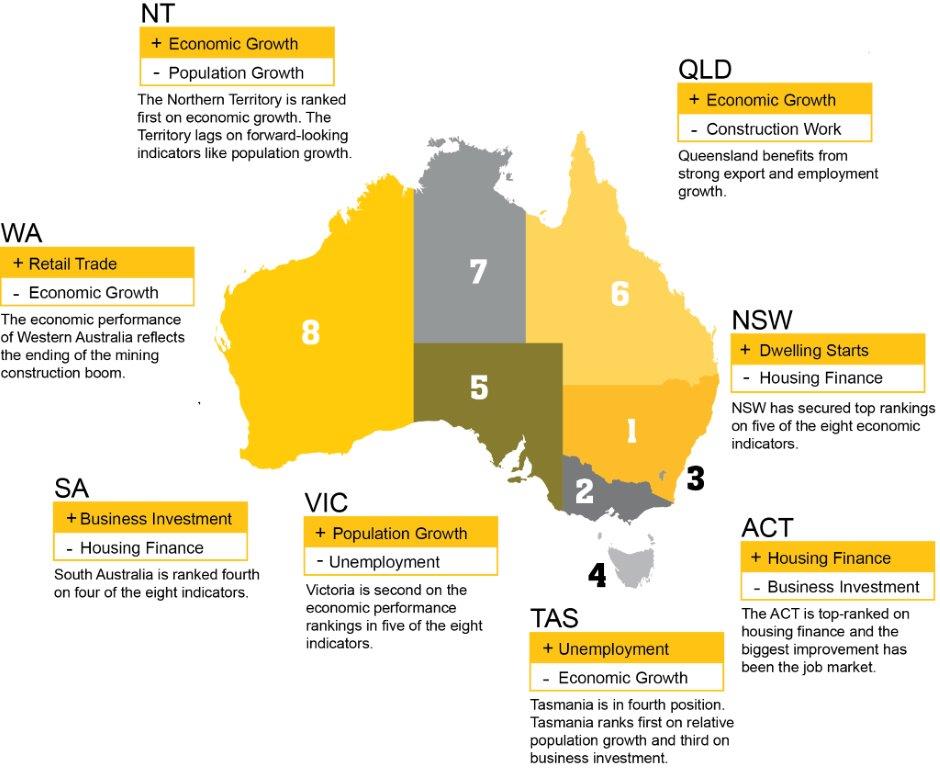 Just as the Reserve Bank uses long-term averages to determine the level of ‘normal’ interest rates, CommSec compares the key indicators to decade averages - that is, against the ‘normal’ performance.

CommSec also compares annual growth rates for the eight key indicators for all states and territories as well as Australia as a whole, enabling a comparison of economic momentum. On the eight indicators assessed in this last quarter, Victoria and the Northern Territory top growth on two measures each while South Australia, Tasmania, Queensland and the ACT lead on the other four indicators. Victoria exceeds the national average on all eight indicators.

New South Wales has retained the position as the best performing economy, at or near the top of all indicators. It has secured top rankings on five of the eight economic indicators: retail trade, dwelling starts, equipment investment, construction work and unemployment. New South Wales is second on economic growth and in third spot on population growth and housing finance.

Victoria is second on the economic performance rankings in five of the eight indicators: retail trade, housing finance, population growth, construction work done and equipment investment. The lowest ranking is fifth on the unemployment rate.

“Victoria remains clearly in second place on the performance rankings with few changes over the past quarter. It also leads annual growth rates on two indicators,” said James.

The ACT held on to third spot on the rankings. The biggest improvement has been the job market, with annual employment growth now the strongest in almost a decade. The ACT is top-ranked on housing finance.

“The ACT remains in top spot on housing finance with the number of commitments up by 36.7 per cent on the long-term average,” said James.

Tasmania has lifted from fifth to fourth position. Tasmania now is top-ranked on relative population growth and is third-placed on equipment investment and unemployment. Population growth is the strongest in six-and-a-half years.

“Tasmania is now on top of the relative population rankings, with its 0.64 per cent annual population growth rate,15.8 per cent, above the decade-average rate,” said James.

South Australia has eased from fourth to fifth spot on the performance rankings. South Australia is ranked fourth on four of the eight indicators. It’s now in fourth position with construction work 10.4 per cent above decade averages.

“In terms of annual growth rates, South Australian construction work done in the September quarter was up 22.8 per cent on a year ago,” said James.

Queensland remains in sixth position. But the outlook is promising with annual employment growth the fastest in the nation and just off the fastest for the state in over a decade.

“Queensland has the strongest annual employment rate at 4.6 per cent, alongside the ACT and above New South Wales at 3.5 per cent,” said James.

The Northern Territory retains its seventh position on the economic performance rankings. It is top ranked on economic growth but now lags all other economies on six of the eight indicators. Employment is now lower than a year ago in trend terms. The good news is that exports are growing strongly.

The economic performance of Western Australia continues to reflect the ending of the mining construction boom. But employment growth was just off the strongest levels seen in five years, and annual population growth has lifted for the past four quarters.

“Western Australia’s population in the June quarter was up by 0.84 per cent on a year ago – it was actually the fastest rate in two years.  In terms of construction work, WA saw it fall 42 per cent below the decade average in the September quarter,” said James.