Consumer spending across Australia rose modestly in January, with a 0.2 per cent increase in trend terms, according to Commonwealth Bank’s latest Business Sales Indicator (BSI). 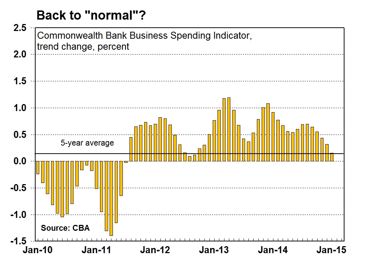 Craig James, Chief Economist at the Bank’s broking subsidiary CommSec and author of the BSI report, said that while growth continued to slow in January, businesses can be optimistic about an improvement in consumer spending in the near-term.

“With household finances improving following the fall in petrol prices and recent interest rate cut, we can expect many consumers to slowly start opening their wallets and increasing their spending as we progress through 2015.

“Overall, the economy is in a relative stable position, so business owners should start planning for growth in 2015 and take advantage of the expected increase in household disposable income,” said Mr James.

By trend, the BSI has risen for 43 straight months in Queensland, while Tasmania has seen sales rise for 34 consecutive months.

Spending continued to fall in New South Wales (down 2.0 per cent), and contractions were seen in Northern Territory (down 1.1 per cent), South Australia (down 0.6 per cent) and Victoria (down 0.3 per cent).