From East London to Arnhem Land

From East London to Arnhem Land 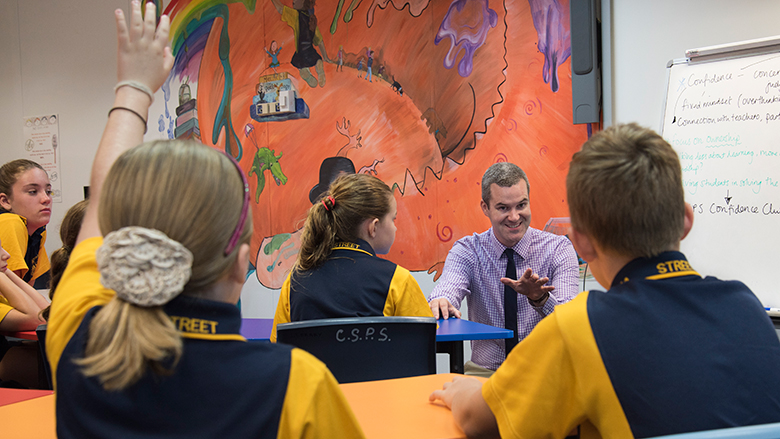 Back in 2008, John Cleary was feeling "pretty good" about himself as a teacher.

He'd left the East London school where he'd been working, come to Australia and taken a temporary job teaching at Ngukurr in Arnhem Land.

But his first week in the classroom at this Aboriginal community was a shock.

"On my first day, 20 students came to class. Thirteen came the next day, then 10 the next," he says.

John knew he could continue to teach the same way, or he could work out why half the children didn't want to come to class.

He says it was tough to face his failings.

But when he did, he came to the humbling conclusion that "my students know more about learning than I do".

“It was challenging starting the day with 20 children and after recess only having half come back," he says.

"I saw it as feedback on my teaching on a minute-by-minute basis. If I retained them, I knew I’d earnt it.”

John also pondered the similarities and differences between where he’d been, and where found himself.

"I wondered how many of my students in London would have gone home at recess if they’d had the choice and the fences weren’t so high!"

During his life-changing three years at Ngukurr school, John – whose mother was a primary school teacher – helped transform it "to be the heart of the community rather than on its fringe".

He learnt to tackle problems head on and in a highly practical way.

For example, instead of like waiting for students to arrive, he drove the school bus to them, knocking on doors to collect the kids.

At Casuarina Street Public School in Katherine, 300km south of Darwin, where he is now principal, John makes sure he knows at least "four or five things" about each of his 405 students. He's out in the playground at recess and lunchtime.

At the relatively young age of 35, John now leads what other educators regard as a model school.

About half of Casuarina Street's students are children of transient Australian Defence Force personnel and one in 10 is from an indigenous background.

As they arrive at school, John asks each child what they want to learn and then tries to deliver it.

During the past four years, enrolments have grown and teacher retention has increased significantly.

Students’ NAPLAN results in reading, writing and numeracy at years 3 and 5 has improved and is now at national average levels.

“During the past two years, students at our school have made more progress than almost any other group of students in Australia," says John. "We’re pretty proud of that."

John is being recognised nationally as a 2018 Commonwealth Bank Teaching Awards Fellow.

The Commonwealth Bank Teaching Awards are run in partnership with Schools Plus, a not-for-profit organisation, which was established in 2013 to increase philanthropy for schools that most need support. Launched in 2016, the Awards are run annually to recognise and reward 12 teachers across Australia with a $45,000 Teaching Fellowship. The majority of the recipients are teachers or school leaders working in schools in disadvantaged communities.