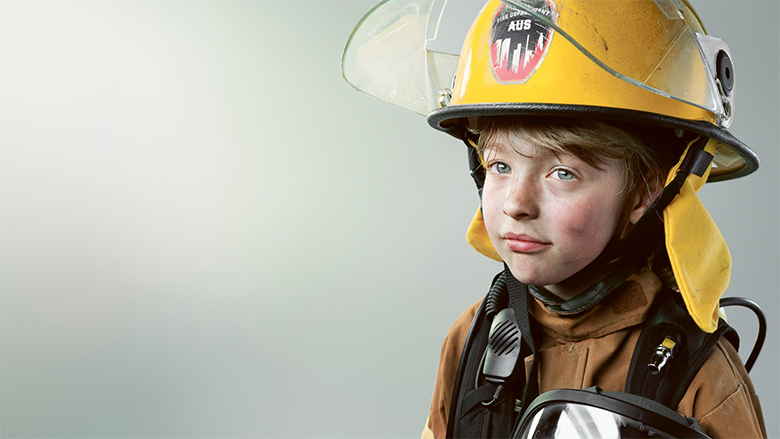 The Commonwealth Bank of Australia today announced its results for the financial year to 30 June 2016.

Highlights of the Full Year 2016 Results

The Commonwealth Bank of Australia (the Group) today announced its results for the financial year to 30 June 2016.

Commenting on the result, Chief Executive Officer Ian Narev said, “We have pursued a simple, consistent strategy for over a decade now. Continued execution of that strategy, focused on customer satisfaction, innovation and strength, has again driven solid operating performance and balance sheet growth for the Group.”

“In the banking businesses, net interest income growth was supported by continued home and business lending and strong deposit growth, particularly in transaction banking. In other parts of the Group we also saw trading income growth and an increase in funds under administration. Sound cost management saw improvements in the Group’s cost-to-income ratio, and together with income growth, resulted in a 6% increase in operating performance on the prior year.”

Commonwealth Bank ranked outright number one for retail customer satisfaction for each month during the financial year, and ranked first or equal first in all key segments of business customer satisfaction at year end.3  Wealth Management regained the top spot for adviser satisfaction in April 2016 and the bank was also named Bank of the Year - Small Business by Canstar.4

Mr Narev said, “Customer satisfaction is the key metric we use to benchmark execution of Group strategy, because satisfied customers look to us to meet more of their needs. This year we have achieved our best ever customer satisfaction results, and this has again translated into increased customer activity.”

During the financial year, the Group responded to increased regulatory capital requirements and raised $5.1 billion through an entitlement offer for all shareholders. As at 30 June 2016, the Group had a CET1 capital ratio of 10.6% on an APRA basis, up from 9.1% as at 30 June 2015; and a CET1 capital ratio of 14.4% on an internationally comparable basis up from 12.7%. The larger capital base impacted return on equity which was down 170 basis points to 16.5%.

In the year, the Group also achieved 8% growth in customer deposits, which now contribute 66% of group funding. As at 30 June 2016, the Group’s net stable funding ratio, on current calculations, exceeded 100%, and the liquidity coverage ratio was 120%.

“Our capacity to support our customers is directly related to the strength of our balance sheet. As a result of the capital raising and strong organic capital growth throughout the year, we have substantially boosted our capital position. This now places us above any ‘unquestionably strong’ benchmark for CET1 capital. With clarity on a number of global regulatory reforms expected by the end of this calendar year, we are confident that we will maintain our position of strength across all required metrics. Notwithstanding the increased capital levels, global volatility and regulation have meant that funding costs have moved higher in the second half of the year,” said Mr Narev.

The strength of our people

Mr Narev commented, “Our people have showed continuing commitment and dedication to their customers and the values of the Commonwealth Bank, as evidenced by the strength of our customer satisfaction performance. This year, to support our focus on embedding a values-driven way of working across the Group, we are incorporating into everyone's performance review an assessment of how we have demonstrated our values and enhanced our risk culture.”

“Making the Group a place where our people feel motivated to give of their best, regardless of gender, ethnicity, sexual orientation, age, or whether they have a disability, also remains a major priority.”

The Group has reached its target of having women in 35% of Executive Manager and above positions, and so has set a new target of 40% by 2020. The Board is now one third female and by the end of the calendar year, 50% of the Group Executive team will be female. The Workplace Gender Equality Agency awarded the Group the Employer of Choice for Gender Equality citation and the Group was named the second-most inclusive employer in the 2016 Australian Workplace Equality Index Awards.

“We are pleased with progress on gender diversity, but we must sustain our efforts,” Mr Narev said. “We will also maintain our focus on cultural diversity, and generally creating an environment that reflects the diversity of the communities in which we live and work.”

Momentum on innovation initiatives was maintained in 2016. For retail customers the emphasis was on fast and simple digital transactions. The CommBank app now includes ‘Instant Banking’, which allows new-to-bank customers to open an account and transact immediately, new online loan approval capabilities, and click-to-pay with ‘Photo a Bill’. For business customers, the focus was on delivering business intelligence and integrated technology solutions, including through new partnerships with leading fintech providers. The bank also continued the successful roll-out of Albert EFTPOS tablets, with more than 40,000 now in the market.

Technology developments overseas also contributed to the Group’s innovation capabilities. In New Zealand, ASB launched the Clever Kash cashless money box. In South Africa, TYME launched a MoneyTransfer remittance product through supermarkets. The Group’s Innovation Labs incubator network was extended beyond Sydney to include Melbourne, London and Hong Kong, and leading-edge investments were made in blockchain and quantum computing.

In 2016, the Group distributed $7 billion in dividends to more than 800,000 shareholders and super funds, and paid $6.2 billion in salaries and wages to 41,400 Australians and to 51,700 of our people overall. Payments of $4.2 billion were made to around 5,000 SME partners and suppliers, more than 90% of which were Australian. The Group was also the biggest tax payer in Australia, contributing $3.6 billion in tax, equivalent to 4.8% of Australia’s total corporate tax receipts.

Mr Narev commented, “In addition to fulfilling our responsibility to support individuals and businesses directly, we are also proud of the Group’s contribution to the economy through the taxes, salaries and dividends we pay. We look for ways to make a positive contribution beyond our core business, and are committed to operating sustainably and to supporting the communities in which we operate through a range of education and community investment focused initiatives.”

“However, on-going economic strength will require a lift in the low rates of nominal growth. Income growth inside and outside Australia remains weak, so people are not feeling better off. When combined with on-going global economic and political uncertainty this makes households and businesses cautious, and hesitant to respond to monetary stimulus.”

“At CBA, we are cognisant of the combined impact of weaker demand, strong competition and increasing regulation. An on-going focus on productivity and credit quality will be important. But we remain positive about Australia’s economic prospects, driven by population growth, our proximity to growth in Asia and the attractiveness of Australia as a destination and a trusted source of a broad range of goods and services. So we will continue to manage for the long term, putting customers first and investing for the future.”

2For an explanation of, and reconciliation between, Statutory and Cash NPAT refer to pages 2, 3 and 15 of the Group’s Profit Announcement for the full year ended 30 June 2016, which is available at www.commbank.com.au/shareholders. 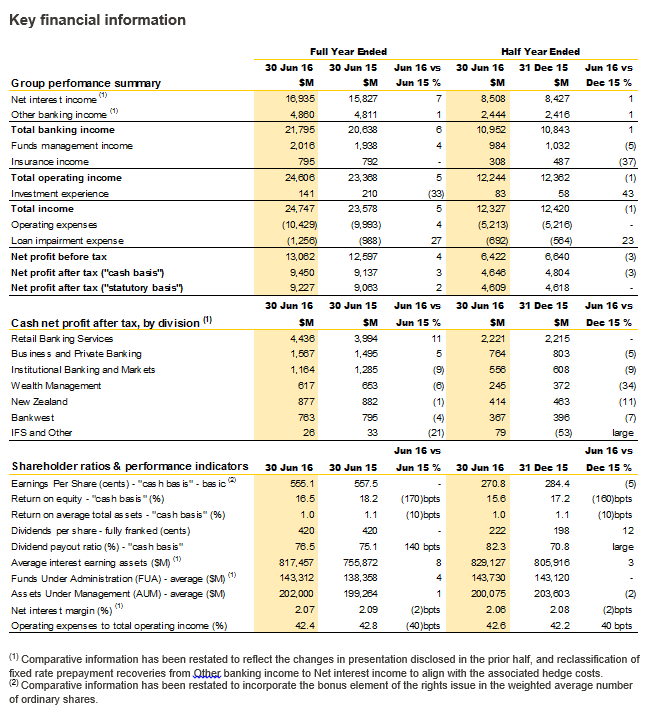