Highlights of the 2014 Interim Result

(2) For an explanation of, and reconciliation between, Statutory and Cash NPAT refer to pages 2, 3 and 15 of the Group’s Profit Announcement for the half-year ended 31 December 2013, which is available at www.commbank.com.au/shareholders.

(3) Comparative information has been restated to conform to presentation in the current period.

The Commonwealth Bank of Australia’s (the Group’s) statutory net profit after tax (NPAT) for the half year ended 31 December 2013 was $4,207 million, which represents a 16 per cent increase on the prior comparative period.  Cash NPAT for the half was $4,268 million, an increase of 14 per cent.

Cash Return on Equity increased by 80 basis points to 18.7 per cent.

The interim dividend, which will be fully franked, will be paid on 3 April 2014. The ex-dividend date is 17 February 2014. The Group’s Dividend Reinvestment Plan will continue to operate, but no discount will be applied to shares issued under the plan for this dividend.

Commenting on the result, Group Chief Executive Officer, Ian Narev said: "This result again demonstrates the benefits of our long term strategic priorities – people, technology, strength and productivity. All of our businesses have performed well. We have strengthened our focus on enhancing the financial well-being of our customers and have used our leading technology platform to deliver innovative products and services to business and personal customers."

"The results show that our customer focus creates value for all our shareholders, including the 800,000 Australian households who own our shares directly, and the millions more who own them through their superannuation. The strong revenue growth we have achieved, in what has been a period of relatively subdued economic activity, demonstrates the success of our commitment to meeting the needs of our customers. Our on-going productivity initiatives have helped us maintain our expense discipline and, at the same time, deliver revenue growth. So, we have again been able to invest for the long term benefit of the business, with nearly $600m of investment in this half."

Strong deposit growth during the period has seen the Group satisfy a significant proportion of its funding requirements from customer deposits, with deposits remaining at 63 per cent of total Group funding. However, competition for domestic deposits remained strong and continued to have a negative impact on margins. During the period the Group took advantage of improving conditions in wholesale markets, issuing $17 billion of long term debt in multiple currencies.

While some of the Group’s customers are facing challenges, this is not translating into a deterioration of credit quality.  However, given the uncertain outlook for both the global and domestic economies, the Group remains cautious, maintaining a strong balance sheet with high levels of capital and provisioning. Liquidity was $137 billion as at 31 December 2013.

On the outlook for the 2014 calendar year, Ian Narev said: "We remain cautiously optimistic about the economic environment for this year. We have seen, in recent weeks, that there is still volatility in global markets. The risks presented by that volatility continue to supress business confidence. As a result, there is little real evidence, so far, of a meaningful increase in investment in the rest of the non-resource sector of the Australian economy, other than in housing."

"However, growth forecasts for developed economies have improved, consumer spending over the holiday season was generally higher than last year, corporate balance sheets remain strong, there is positive activity in the housing sector, and the Australian dollar has become more competitive."

"So all in all, we continue to assume that any improvements in economic activity in the next year will be gradual rather than dramatic. We will stick to our proven strategy, and maintain business settings that reflect both the risks and the opportunities of this economic environment." 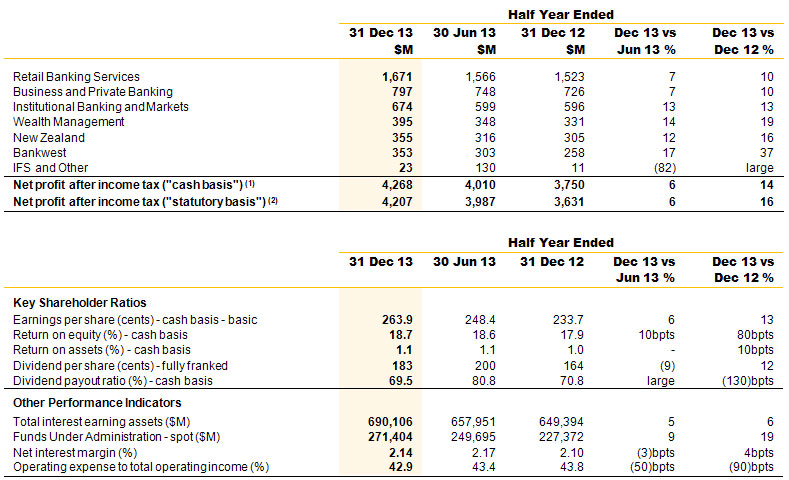