(2) For an explanation of, and reconciliation between, Statutory and Cash NPAT refer to pages 2, 3 and 15 of the Group’s Profit Announcement for the full year ended 30 June 2014, which is available at www.commbank.com.au/shareholders.

(3) Comparative information has been restated to conform to presentation in the current period.

The Commonwealth Bank of Australia (the Group) today announced its results for the financial year ended 30 June 2014. The Group’s statutory NPAT was $8,631 million, which represents a 13 per cent increase on the prior year. Cash NPAT was $8,680 million, up 12 per cent. Return on equity (cash) increased 50 bpts to 18.7 per cent.

The Group’s Dividend Reinvestment Plan (DRP) will continue to operate, but no discount will be applied to shares issued under the plan for this dividend. Given the Group’s high level of CET 1 capital, the Board has decided to neutralise or minimise the dilutive impact of the DRP through an on-market share purchase and transfer to participants. The Group is also considering the issue of a Tier 1 capital instrument to replace PERLS V should markets remain receptive.

Commenting on the result, Group Chief Executive Officer, Ian Narev said: “This result benefits a wide range of stakeholders, and we are proud of the role we have continued to play in building a strong Australia.  During this financial year, we lent over $130 billion to Australian households and businesses, held $26 billion more deposits, and increased the investments we helped manage by over $20 billion. Our Australian-based shareholders, comprising nearly 800,000 households who own our shares directly and millions more who own them through their pension funds, received over $6.4 billion in dividends, and saw the value of their investment in the Commonwealth Bank increase by over $19 billion. We paid over $5.4 billion to more than 50,000 people whom we employ, continuing our commitment not to offshore Australian jobs. We spent $4 billion with local partners and suppliers, including hundreds of small businesses. We were one of Australia’s largest tax payers, paying around $3.4 billion in State and Federal tax.  And we made significant contributions to support individuals, charities, sporting organisations and communities’ right across Australia.”

“And as a 102 year-old company, we are always keeping an eye on the future. This year we have again struck a balance between the Group’s short term and long term priorities. At the same time as delivering a 12 per cent increase in cash earnings, and a strong return on equity, we reinvested $1.2 billion into the business, most of which was targeted at our long term strategic priorities – people, technology, strength and productivity. We have also continued investment in our capability-based strategy outside Australia.”

Strong deposit growth during the period has seen the Group satisfy a significant proportion of its funding requirements from customer deposits, with deposits now providing 64 per cent of total Group funding. During the year the Group took advantage of improving conditions in wholesale markets, issuing $38 billion of long term wholesale debt in multiple currencies.

Despite the continued benign credit environment and the improving macro-economic outlook, the Group remains cautious, maintaining a strong balance sheet with high levels of capital and provisioning. Liquidity portfolio was $139 billion as at 30 June 2014.

Turning to the future, Ian Narev said: “We are cautiously positive about the outlook for the 2015 financial year. Whilst business and consumer confidence levels have remained fragile, the levels of underlying activity confirm the strong foundations of the Australian economy. Lower interest rates have been positive for the housing and construction sectors, where increased activity has gone some way to offset the impacts of the anticipated reduction in investment in the resources sector. And although investment in the resources sector has tapered off as predicted, the fruits of previous investment are showing up in increased production of iron ore and LNG, as new projects move into the production phase.”

“The past twelve months have also been a period of relative stability in the global economy although downside risks remain.”

“If the stability in global markets continues, gradual increases in consumer spending and demand for credit from businesses over the next year are likely, as long as budget discussions are progressed and there is a clear understanding of Australia’s medium to long term economic direction.”

“In terms of our own business settings, and economic policy, it is critical to take a long term view of the Australian economy. We will continue our focus on the future and building our priority capabilities: people, technology, productivity and strength. We will also actively support policies designed to build a sustainable Australian economy over the next decade.”

(2) During the year the Group successfully completed the internalisation of the management of CFS Retail Property Group (CFX) and Kiwi Income Property Trust (KIP), and the Group has ceased to manage the Commonwealth Property Office Fund (CPA). The Group also sold its entire proprietary unit holding in CPA and KIP, and part of its proprietary unit holding in CFX. As such, these Property transactions and businesses have been excluded from the calculation of certain financial metrics and comparative information. 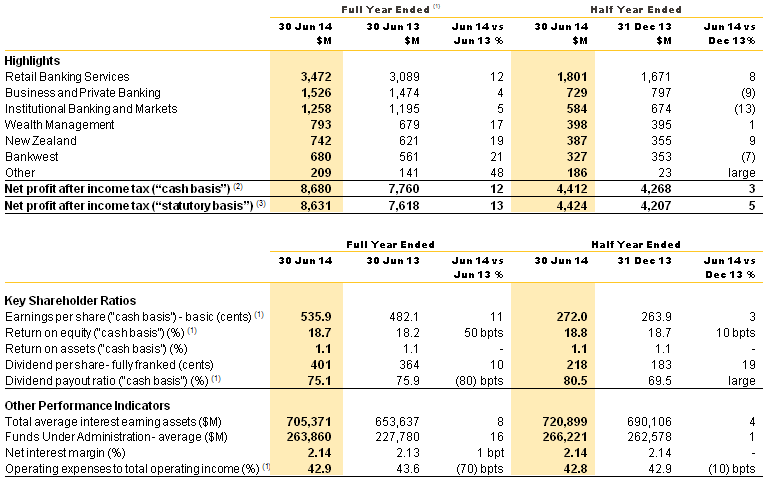