NOT FOR DISTRIBUTION OR RELEASE IN THE UNITED STATES

The Commonwealth Bank of Australia (“the Group”) today announced its results for the financial year ended 30 June 2015. The Group’s statutory NPAT was $9,063 million, which represents a 5 per cent increase on the prior year. Cash NPAT was $9,137 million, also up 5 per cent. The Group also announced the launch of a $5 billion pro rata renounceable entitlement offer for all shareholders.

The Group maintained a strong balance sheet throughout the year, including high levels of capital with all ratios well in excess of regulatory minimum capital adequacy requirements. The Group is raising capital to meet future requirements including the change to average mortgage risk weights for Australian residential mortgages announced by APRA in July 2015. This further strengthens the Group’s internationally comparable capital ratios and places the Group in the top quartile of its international peers in relation to its capital levels.

Commenting on the result, Group Chief Executive Officer, Ian Narev said: “Over many years now we have pursued a simple, consistent strategy. This result shows that execution of that strategy continues to deliver well for our customers and our shareholders. This financial year saw all-time highs in retail customer satisfaction, with the Group returning to the number one position at year-end, and ongoing high levels of customer satisfaction in our other businesses. As a result, our balance sheet continued to grow, and combined with ongoing margin discipline, this resulted in good levels of revenue growth given market conditions. We also maintained our focus on productivity, which is particularly important given increasing levels of regulatory and compliance costs.

Technology again featured strongly in the high levels of investment that we maintained throughout this financial year. Our focus remains on the use of technology to improve all our channels, and to underpin continuous process improvement, to simplify our customers’ experience with us. The impact of our technology focus is particularly clear in transaction banking and deposits in this result.

Maintaining a flexible and strong balance sheet, including a strong capital position, continues to be a strategic focus for the Group. We now have greater certainty regarding the key requirements of global relativity and mortgage risk weights. Our announcement today strengthens our position in response to those requirements. This will provide us with on-going flexibility so we can continue to support our customers.

These results can only be achieved by the hard work and dedication of our people. Their commitment to enhancing the financial wellbeing of people, businesses and communities benefits a wide range of stakeholders. These include more than 15 million customers, and nearly 800,000 Australian households who directly own our shares and the millions more who own their shares through their superannuation funds. This year we paid over $6.8 billion in dividends to our shareholders and they saw the value of their investment grow by $9 billion(1). Beyond our customers and shareholders, our performance has benefited a broader group of stakeholders including our 52,000 people, more than 6,000 small businesses which supply goods and services to us, and the broader communities in which we operate, particularly the education sector in which we have recently announced significant new initiatives.”

(1) Increase in the Group’s market capitalisation.
(2) Results for the Roy Morgan retail MFI Satisfaction survey. Based on six month rolling average up to and including June 2015.
(3) Includes transactions, savings and investment average interest bearing deposits.

The Group will offer entitlements to CBA ordinary shares pro rata to all eligible shareholders, which can be exercised to buy 1 new share for every 23 shares held on the record date for the offer at an offer price of $71.50 per new share (“Entitlements”). This represents a 10.5 per cent discount to the dividend adjusted closing price on the ASX on 11 August 2015. Eligible Retail Shareholders who do not exercise, sell or transfer their Entitlements will have their Entitlements sold on their behalf through a bookbuild process and any sale proceeds will be paid to them.

The offer will be fully underwritten to raise approximately $5 billion. Approximately 71 million new fully paid CBA ordinary shares will be issued (approximately 4.3 per cent of shares on issue).

Following the capital raising, the Group’s pro forma CET1 ratio will be 14.3 per cent on an internationally comparable basis (which assumes full implementation of the Basel III reforms), and 10.4 per cent on an APRA basis. You should refer to the results presentation for the full year ended 30 June 2015 for further information on the offer and its financial impact on the Group.

New shares acquired through the offer will not receive the dividend payable for the full year ended 30 June 2015. New shares will rank equally with existing shares in all other respects.

On the outlook for the next 12 months, Ian Narev said: “The Australian economy has some good foundations. The RBA’s monetary policy settings have stimulated residential construction activity, which has aided the economy’s transition from its dependence on mining investment. The Federal Budget's small business measures have had a discernible impact. Business credit quality is generally very good, while in the household sector savings rates are solid. Household credit quality remains high, though the banking sector and our regulators are conscious of the potential impacts of a sustained period of low interest rates, and are therefore taking measured action.

Risks remain in the near-term resulting from some ongoing volatility in parts of the global economy. One important factor to watch over the next year will be whether the lower dollar stimulates investment by export-sensitive industries, to create jobs and stimulate consumer demand.

In the longer term, we have a positive view of the Australian economy. In growing markets in our region, there is a high demand from people who want to buy Australian goods and services, invest in Australia, educate their children in Australia, visit Australia and in some cases move to Australia. Australia's exceptional natural and human resources position us well. But we must ensure that our policy environment positions our economy to benefit from its strengths. Businesses and all sides of politics must work together towards a goal of a more diverse and productive economy. We need particular focus on a more efficient and fair tax system, building of high-quality and well-prioritised infrastructure, and trade and foreign investment settings.

At CBA we will continue our significant investment in our long-term strategic priorities. Our ongoing goal is to have highly motivated people putting the customer at the centre of everything we do, and focusing on deploying leading technology to simplify our customers' dealings with us, and to continuously make the organisation more productive.” 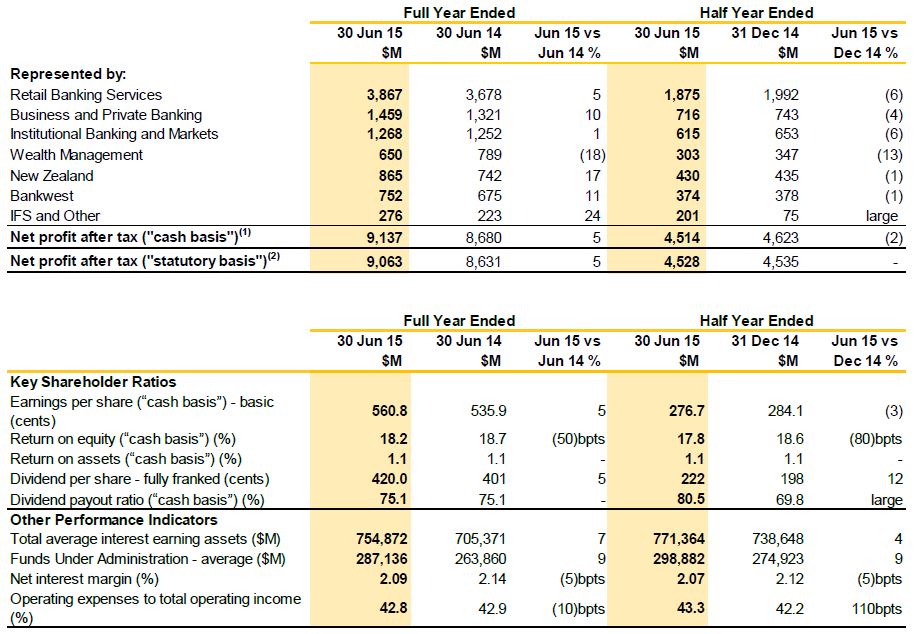 The pro forma historical financial information included in this announcement does not purport to be in compliance with Article 11 of Regulation S-X of the rules and regulations of the U.S. Securities and Exchange Commission.

Neither this announcement nor any other documents relating to the offer of entitlements or new shares may be sent or distributed to persons in the United States.