NAIDOC Person of the Year 2019

NAIDOC Person of the Year 2019 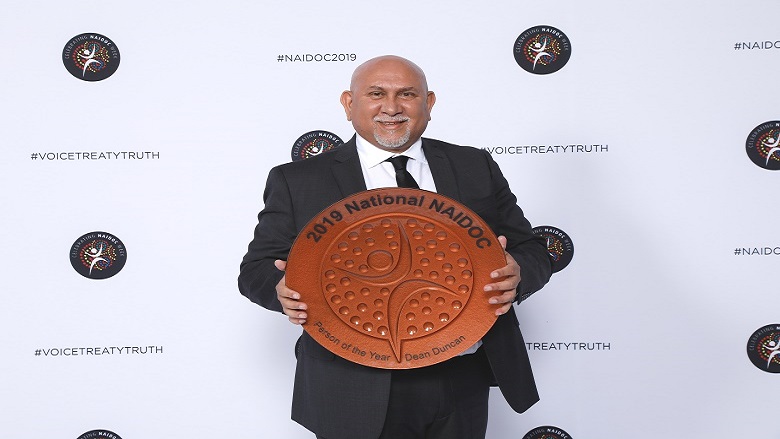 Dean Duncan acknowledged as National NAIDOC Person of the Year 2019.

Dean Duncan has been named the National NAIDOC Person of the Year for 2019, honouring him as a champion of diversity, social justice and equality.

The annual awards, sponsored by Commonwealth Bank, recognise the outstanding contributions that Indigenous Australians make to improve the lives of Indigenous people in their communities and beyond, or to promote Indigenous issues in the wider community, or the excellence they’ve shown in their chosen field.

Mr Duncan has spent more than 17 years as a teacher and senior lecturer, with the aim of increasing the number of qualifications held by Aboriginal and Torres Strait Islander people.

As the Associate Director of Indigenous Education at the Weemala Indigenous Higher Education Unit, he introduced the first Bachelor of Midwifery (Indigenous) and Away from Base program – a key  component in the Closing the Gap strategy for maternal health outcomes.

He is the National Diversity Manager at Lifestyle Solutions, supporting people living with disabilities and young people in Out of Home Care. He leads the organisation’s diversity and inclusion program, championing the recruitment of people from diverse backgrounds.

“I’m extremely pleased to congratulate Dean as this year’s National NAIDOC Person of the Year. His determination and passionate pursuit for diversity, social justice and equality make him an inspirational role model for all Australians. He has dedicated his life to making a difference and through his work he has set an exemplary example. It’s an honour to present him with this award,” said Ms Sutton.

Commonwealth Bank has been a proud sponsor of the NAIDOC Awards since 2009, and will be providing a $20,000 bursary to the 2019 NAIDOC Person of the Year award.