State of the States: NSW still on top: SA climbs to fifth 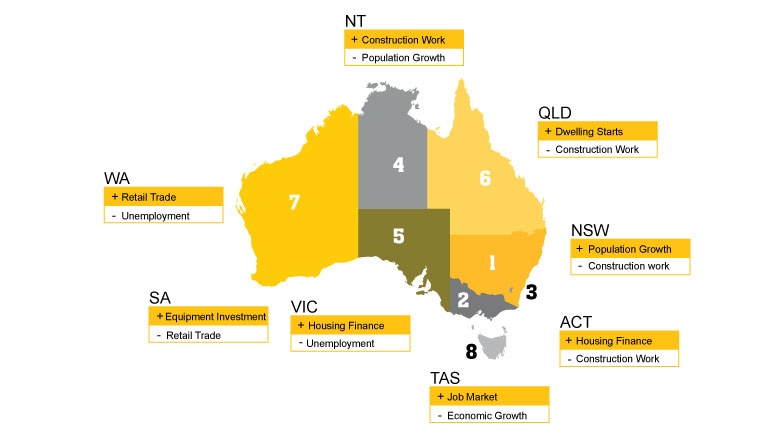 NSW has maintained its solid grip as the nation’s leading economy according to the latest CommSec State of the States report.

NSW has maintained its solid grip as the nation’s leading economy, according to the latest CommSec State of the States report released today.

The quarterly report finds that Victoria has drifted marginally away from NSW after a strong burst, but these two economies still hold a healthy lead over the other states and territories through their strength in economic growth, population growth and retail spending.

The ACT economy has improved over the past few months and held onto third spot in the rankings. The Northern Territory is in fourth place, but is now closely followed by South Australia which has jumped two spots since the last report into fifth place.

Queensland and Western Australia have fallen to sixth and seventh respectively. Tasmania sits in eighth position, but there is now little separating these three bottom ranked economies.

Craig James, Chief Economist, CommSec, said the latest report reinforces the transition underway from mining investment in the Australian economy to other sectors, particularly those centred on services such as retailing, construction and infrastructure, and the professions.

“Investment activity in the resource rich areas like Western Australia, Queensland and the Northern Territory is well down from the highs of the mining boom. NSW and Victoria are moving further ahead in the performance rankings as they benefit from strong retail spending and population growth.

“While there has been an increase in homebuilding, and the immediate outlook for the sector remains strong, we can expect a slowdown later in 2016 and into 2017 as the surge in supply of new homes meets pent-up demand,” Mr James said.

Detailed findings for each state include:

NSW (first overall) has kept the top ranking on population growth, equipment investment, retail spending and dwelling starts, and has also added economic growth to its top rankings since the last report. It has also moved to second spot on unemployment and sits at third on construction work and housing finance.

“Once again NSW is leading the way on many economic indicators and can claim the top ranking of economic performance. Population growth is above long-term averages and dwelling starts are at almost 77 per cent above decade averages, providing solid momentum for the state’s economy” Mr James said.

“Victoria has drifted marginally away from NSW but is solidly in second spot on the economic performance indicators through its strong performance across nearly all categories. The state also now has the fastest annual economic growth rate in the nation, up by 3.6 per cent on a year ago,” Mr James said.

The ACT remains the third ranked economy and is now top ranked on housing finance, which is up by 26.2 per cent on a year ago. The territory is also ranked third on economic growth, unemployment and population growth.

“The ACT has improved considerably in the last quarter and has comfortably held onto third spot in the performance rankings. Stronger housing activity, and the lift in business investment, will support the job market and retail spending over the coming year,” Mr James said.

The Northern Territory is ranked fourth nationally and has maintained the top spot for construction work done. The territory is also the best on unemployment, but is ranked sixth on retail trade and last on population growth, business investment and housing finance.

“The Northern Territory has achieved some strong results, but there are signs that it is losing momentum with slow population growth, weak demand for housing loans and a sharp fall in equipment investment. As key resource projects are completed, activity levels will slow further unless investment increases,” Mr James said.

South Australia has improved considerably in the last quarter and sits at fourth on housing finance and population growth and fifth on economic growth, but is ranked sixth on retail trade.

“The South Australian job market has improved in the past year, particularly in the last quarter. If the positive trend continues then retail spending could improve and help the state climb further in the economic performance rankings,” Mr James said.

Queensland has moved from fifth to sixth spot on the economic performance rankings. The state is second on dwelling starts, but is seventh on economic growth and unemployment, and last on construction work.

“Queensland has slipped down the rankings and now sits just above Western Australia and Tasmania. However, there are encouraging signs for the state as the lower Australia dollar will support agricultural exports and the tourism sector in the coming months,” Mr James said.

Western Australia is now ranked seventh of the Australian economic performance table and is now last in terms of unemployment. The state is third on retail trade, fourth on construction work and seventh on business investment, population growth and housing finance.

“In two years Western Australia has gone from first to seventh in the performance rankings. Slower population growth and continuing high unemployment will continue to hinder activity in the state’s housing market,” Mr James said.

Tasmania sits in eighth place and is ranked fifth on four indicators measured including unemployment and construction work done, but is last on dwelling starts and economic growth.

“The Tasmanian economy will continue to benefit from a lower Australian dollar, which is providing a boost to many sectors, particularly tourism,” Mr James said.

Find out more about the latest State of the States report.