Operating momentum across all divisions, cash earnings up 4 per cent

Operating momentum across all divisions, cash earnings up 4 per cent 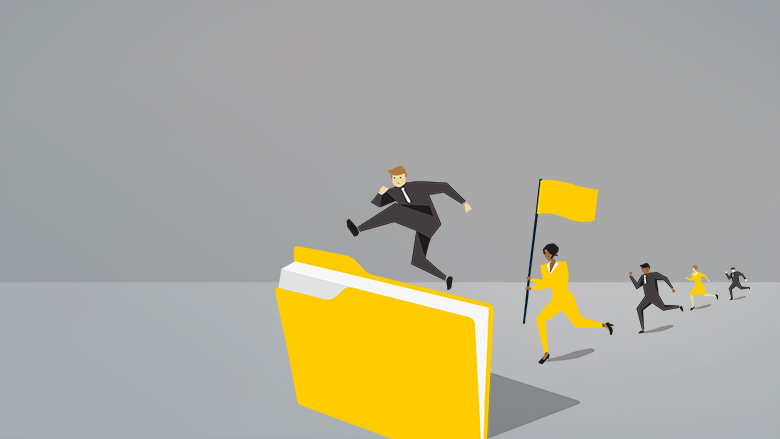 Half year to 31 December 2015. Unless otherwise indicated, all comparisons are to prior comparative period.1

The Commonwealth Bank of Australia’s (the Group’s) statutory net profit after tax (NPAT) for the half year ended 31 December 2015 was $4,618 million, a 2 per cent increase on the prior comparative period (‘pcp’). Cash NPAT for the half was $4,804 million, an increase of 4 per cent.

The Board declared an interim dividend of $1.98 per share, unchanged from the 2015 interim dividend. The dividend payout ratio is 70.8 per cent of cash NPAT. The interim dividend, which will be fully franked, will be paid on 31 March 2016. The ex-dividend date is 16 February 2016. The Dividend Reinvestment Plan (DRP) will continue to operate, but no discount will be applied to shares issued under the plan for this dividend. The Group is also considering the issue of a Tier 1 capital instrument to replace PERLS III should markets be receptive.

Commenting on the result, Group Chief Executive Officer, Ian Narev said: “Our focus on customers has continued during this period to benefit the people, businesses and communities we exist to serve. Our people remain the key to our on-going success. As a result of their efforts, we ranked outright number one for retail customer satisfaction in the half, and equal first for business customer satisfaction.”

“Customer satisfaction has again led to volume growth across our businesses. Operating income grew 6 per cent during this period, with all businesses contributing. This consistency of income, combined with our focus on long-term productivity, sustains our commitment to keep investing in our customer-focused strategy. We will continue to invest to ensure that our strong franchise remains competitive in the future.”

“In addition to investing in our people, we have prioritised investment in technology and innovation to make life easier for our customers in a banking environment that is increasingly digital and mobile.  Though many of our investments are future-focused, we have already seen strong uptake of our digital wallet and mobile offerings such as Cardless Cash and Tap & Pay, and of new CommBank app services including portfolio view, loyalty card storage and tailored merchant offers. In the first half we also invested in cyber security, blockchain and quantum computing, with an eye to building leading-edge technologies, platforms and skills for the future.”

Mr Narev also emphasised the importance of balance sheet strength. “All our stakeholders rely on our stability, particularly when markets are volatile. Our $5.1 billion capital raising through an entitlement offer for all shareholders further bolstered our capital adequacy, and positions us even higher in the top quartile of banks internationally. Our liquidity, funding and provisioning positions are similarly strong.”

On the economic outlook, Mr Narev commented, “These results show that through the latter part of 2015, the Australian economy continued its steady transition from a resource-dependent economy to a more diversified one. Sound monetary policy and a lower Australian dollar are stimulating construction and starting to benefit export-sensitive industries such as tourism, education and agriculture. As a result, the economy overall is starting to generate a broader base of jobs.”

“The transition is still in its early stages. So global volatility concerns our customers, and presents challenges here in Australia. We must be cautious, but also remain focused on the long-term to ensure that Australia remains a great place to live and to invest. Continued progress on key policy foundations such as tax and infrastructure will be critical to support business innovation and job creation. We also have one of the strongest financial systems in the world, to underpin economic growth. With the Financial System Inquiry now concluded, all political, regulatory and industry participants need to be forward-looking and build on this prevailing strength of our economy.”

“At CBA, we will also maintain a long-term focus. We are confident that our long-term strategy remains the right one. We are intensely focused on our vision to secure and enhance the financial wellbeing of people, businesses and communities."

First half 2016 result in detail

Net interest income increased 6 per cent on pcp, reflecting 9 per cent growth in average interest earning assets. This was driven by solid volume growth and revenue momentum across the business. Group transaction balances grew 21 per cent and above-system growth was achieved in household deposits (up 10.6 per cent) and business lending (up 6.8 per cent, excluding Bankwest). A balanced approach to margin over volume in home lending produced growth of 6.5 per cent, slightly below system. ASB saw 12 per cent growth in business and rural balances. Overall, net interest margin was flat on the prior half at 2.06 per cent.

Other banking income increased 4 per cent, due to higher profits from associates and solid growth in fees and commissions, partly offset by derivative valuation adjustments.

Growth in insurance and funds management income of 17 per cent and 6 per cent, respectively, led to a 10 per cent increase in underlying profit after tax for the Wealth Management division.

Ongoing investment spend, inflation and unfavourable foreign exchange movements resulted in a 6.1 per cent increase in total operating expenses. On an underlying basis, expenses grew 3.8 per cent as a result of cost discipline in business units. Total investment spend increased 14 per cent, with the majority earmarked for productivity and growth initiatives.

Loan impairment expense increased 3 per cent on the prior half to $564 million, and the loan loss ratio remained stable at 17bpts.

Cash net profit after tax (NPAT) increased 4 per cent to $4,804 million, 6 per cent higher on the prior half.

In declaring a fully franked dividend of $1.98, a dividend payout ratio of 70.8 per cent, the Board considered the long-term sustainability of the dividend and maximising utilisation of franking credits. The dividend is unchanged from the prior corresponding period.

Return on equity was 17.2 per cent, down 140bpts, due to the increased equity base post the $5.1 billion capital raising.

The Group’s balance sheet and conservative positions on capital, funding and liquidity have been strengthened in the first half.

Basel III Common Equity Tier 1 (CET1) capital increased 100bpts to 10.2 per cent on an APRA basis (14.3 per cent on an internationally comparable basis), reflecting organic capital growth and the proceeds of the rights issue. This puts the Group in the top quartile of banks globally for capital adequacy.

Growth in customer deposits of 9 per cent to $500 billion increased deposit funding to 64 per cent of total funding, up 1 per cent.

The Group’s liquidity coverage ratio increased to 123 per cent as at 31 December 2015, up from 120 per cent at the end of the prior half, with the Group continuing to benefit from a strong position in more stable deposits.

Provisioning levels remain prudent and there has been no change to the economic overlay.

Continued focus on the customer has translated through to further improvements in customer satisfaction rankings. The Retail Bank was outright number one in the Roy Morgan Research Retail Main Financial Institution (MFI) Customer Satisfaction survey throughout the six months ended December 2015; and our share of MFI was 34.1 per cent, compared to 19.4 per cent for the closest peer bank. We also ranked equal first for business customer satisfaction in the DBM Business Financial Services MFI Monitor.

Strong uptake of digital and mobile services in the half shows the benefit of consistent innovation and investment in these areas. Tap & Pay card numbers have more than doubled on the prior half, Cardless Cash transactions grew 96 per cent, and the value of transactions via the CommBank app was up 27 per cent. The volume of transfers via mobile now exceeds BPAY volumes through Netbank. We are also seeing customers increasingly turn to mobile for product purchases with mobile now accounting for 40 per cent of Retail Banking Services sales.

In the half we made additional future-focused investments in technology and skills. We provided $10 million to help Australian researchers build the world’s first silicon-based quantum computer, and committed $1.6 million to develop a centre of expertise for cyber security education with the University of New South Wales. We launched a series of blockchain workshops for industry and regulators, and are collaborating with other international banks on blockchain trials.

The objective of our investment in innovation is to deliver customer value through world-class technology and operations. 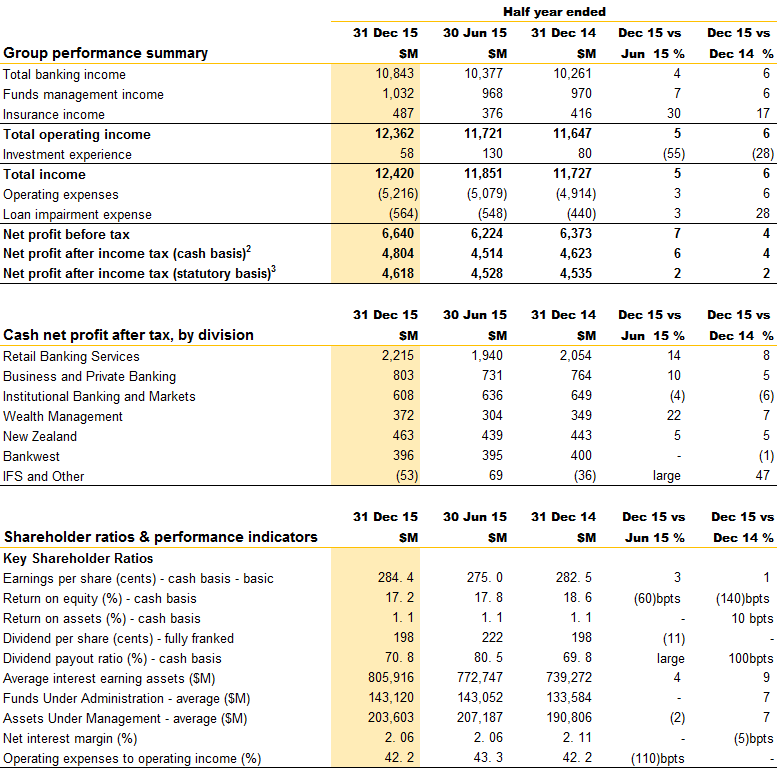 2 Net profit after income tax (cash basis) is used by management to present a clear view of the Group’s underlying operating results, excluding items that introduce volatility and/or one-off distortions of the Group’s current period performance. Excluded items include hedging and IFRS volatility, Bankwest non-cash items and Treasury shares valuation adjustment. For a complete explanation of, and reconciliation between cash and statutory NPAT, refer to pages 3 and 15 of the Group’s Profit Announcement for the half-year ended 31 December 2015, available at:www.commbank.com.au/shareholders.

3 Net profit after income tax (statutory basis) is prepared and reviewed in accordance with the Corporations Act 2001 and the Australian Accounting Standards, which comply with International Financial Reporting Standards (IFRS).

4 The Australian Prudential Regulatory Authority (APRA) requires a minimum CET1 ratio of 4.5%, a CET1 capital conservation buffer of 2.5% of risk weighted assets, a Domestic Systemically Important Bank (DSIB) requirement of 1%, plus a countercyclical capital buffer currently set at 0%, bringing the CET1 requirement for the Group to at least 8%.