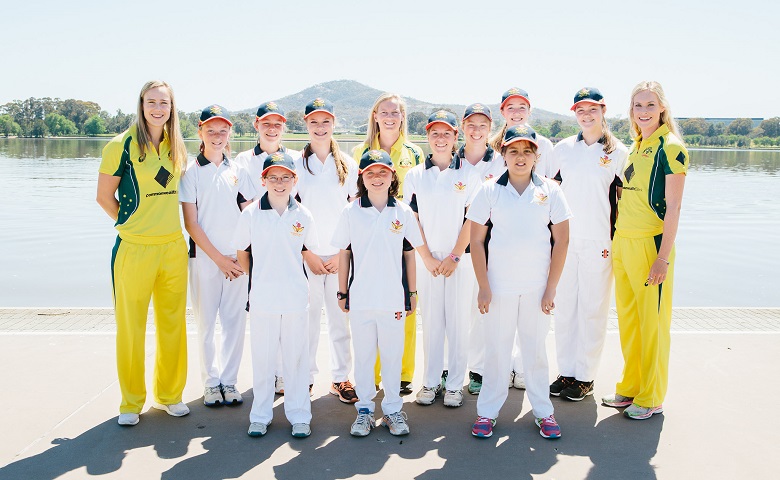 The Commonwealth Bank Southern Stars are setting up for another successful summer of cricket.

As Australia’s best cricketers prepare to take on South Africa tomorrow, Cricket Australia and Commonwealth Bank today celebrated the official launch of the Women’s Cricket Season with a unique skills session on the shores of Lake Burley Griffin.

To prepare for the series opener against South Africa in Canberra on Friday (18 November), Commonwealth Bank Southern Stars players – batter and captain Meg Lanning, all-rounder Ellyse Perry and bowler Holly Ferling – were put through their paces by budding stars from the junior girls teams from Tuggeranong Valley Cricket Club during a skills session at Commonwealth Place.

Southern Stars all-rounder, Ellyse Perry, who has scored in excess of 2,600 runs and taken more than 200 wickets for Australia, said it was great to trade tips and tricks on Australia’s favourite game with some of Canberra’s up and coming players.

“I love cricket and I want to see as many women, men, girls and boys as possible enjoying the game. The Commonwealth Bank’s ongoing commitment to female cricketers at all levels  is fantastic. It’s opening up more and more opportunities for girls right across the country,” Perry said.

“I’m proud to be a Commonwealth Bank ambassador and their drive to broaden participation in the game is one of the primary reasons why I got on board.”

The Commonwealth Bank has supported cricket in Australia for nearly 30 years, and is particularly focused on strengthening the foundations of the game for women, Indigenous players, players with disabilities, and local grassroots clubs around the country.

Stuart Tucker, Commonwealth Bank’s General Manager of Brand, Sponsorship and Marketing Services, said the Bank was looking forward to the season ahead.

“It’s great to be back for our 17th season as a proud sponsor of the Southern Stars. They’re fantastic athletes, great ambassadors for Australia and wonderful role models for women and girls right across the country. We can’t wait for tomorrow’s match against South Africa and wish the team all the best for this series and the season ahead,” Tucker said.

For more information, go to: https://www.commbank.com.au/about-us/who-we-are/opportunity-initiatives/opportunity-from-good-business-practice/cricket.html