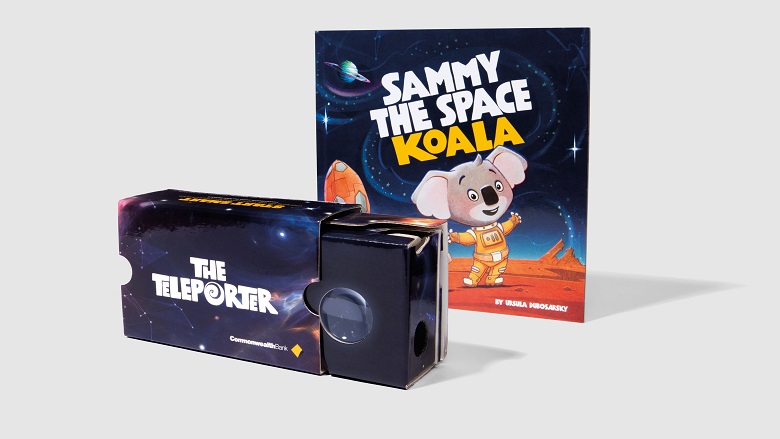 CommBank has launched the Start Smart Virtual Reality pilot in 24 schools across Australia.

As students across the country head back to their classrooms for Term 4, the world’s largest in-school financial education program is expanding with the roll-out of a new Australian-designed pilot in virtual reality learning.

Commonwealth Bank’s Start Smart program, which has taught more than two million Australian students since its launch in 2007, is undertaking a two month trial to determine whether virtual reality technology combined with a storybook in a student’s home can reinforce financial education lessons learned at school.

Approximately 1,500 students, from 24 different primary schools in New South Wales, Victoria, Queensland, South Australia and Western Australia will participate in the Start Smart Virtual Reality pilot, with schools based in metropolitan, regional and rural locations all represented. The pilot is expected to run until the end of November.

At each of the participating schools, Year 1 or Year 2 students will undertake a Start Smart lesson in their classrooms. After the lesson, students will be given an educational storybook and virtual reality headset to take home, where they can re-visit key money concepts from their lesson with their parents or carers. The children’s parents or carers will then be asked to provide feedback on the experience which will inform the development of future financial education initiatives.

“We know that around 10 per cent of Australian 15-year-olds have not reached even a baseline level of financial literacy, which places them in a clear position of disadvantage in a world where you need to be able to make sensible decisions about money in order to be financially secure,” Ms Macfarlane said.

Ms Macfarlane said the Start Smart virtual reality pilot has been introduced as part of a drive to explore how financial education levels in Australian children can be lifted further.

“Start Smart is all about helping young people become financially capable. The program is now educating more than half a million Australian students every year. In fact, more than 50 per cent of schools in Australia have hosted a Start Smart program.

“Yet despite this, findings released by the Australian Security & Investments Commission earlier this year shows only about one in six parents with children at home discuss finances with their kids. This storybook and virtual reality headset have been designed to address that shortfall and be a catalyst for parents and children to discuss basic financial concepts in a fun and engaging way.” (ASIC, Australian Financial Attitudes and Behaviour Tracker, August 2015)

The investment in Start Smart is an important part of Commonwealth Bank’s new corporate responsibility plan, Opportunity Initiatives, which is designed to drive positive change.

“Education and innovation are key to this plan, and we intend to invest in both to prepare our children for the future,” Ms Macfarlane said.

The storybook and Teleporter headset have been designed to work together and feature content adapted from Start Smart’s Year 1 and 2 school programs to provide an interactive, educational experience that reinforces the difference between a ‘need’ and a ‘want’. The concept was devised and created in Australia, with education professionals, gaming designers and a paediatrician all consulted for their respective input.

Start Smart is a fun and interactive financial education program that teaches children the principles of money management, including saving, spending, earning and investing. Developed by educational and behavioural change experts, it is designed to be delivered in schools and vocational education institutions across Australia. The program does not promote CommBank products or services.

Founded in 2007, Start Smart has reached more than 2 million Australian students and it continues to grow – last financial year (2016) alone, more than 550,000 students were booked into Start Smart classes. It is the largest program of its kind anywhere in the world, with more than 73,000 sessions delivered at more than 4,400 schools over the past eight years.

The Start Smart workshops are supported by a comprehensive suite of curriculum-mapped resources for teachers, including lesson plans, videos and animations, all of which provide both the stimulus and framework to make learning about money both creative and fun.

The program has been evaluated by the Australian Council for Educational Research (ACER) and in all eight categories there was a positive impact and an educationally significant impact in six of these – see the Start Smart Impact Report for more detail.

Any schools interested in registering for the Start Smart program can do so online via http://www.startsmart.com.au/.

Commonwealth Bank has developed a Virtual Reality Workplace to enable potential candidates to experience what it is like to work in an agile, future focused workplace that fosters an innovative culture.  This tool was recently awarded Best HR Innovation by the Australian Financial Review.