CommSec State of the States: latest economic rankings of Australia's states and territories

The latest economic rankings of the states and territories 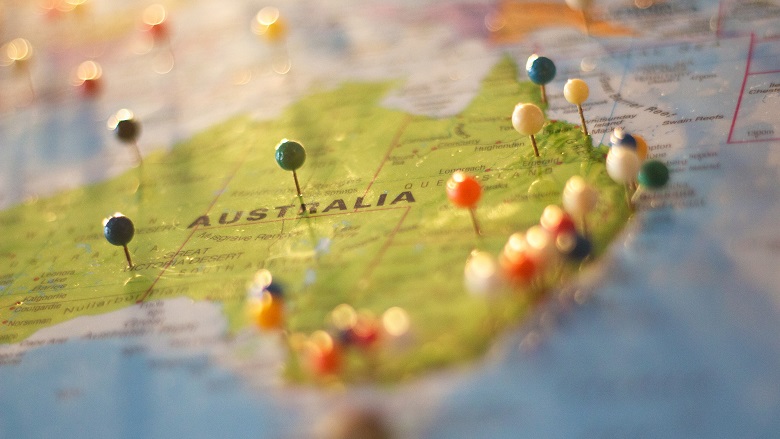 CommSec State of the States Report has New South Wales, Victoria and ACT on top, with shifts in the middle order.

New South Wales remains the best performing economy in Australia but there have been subtle shifts of the mid-ranked states and territories, according to the latest State of the States Report released by CommSec today.

While New South Wales sits at or near the top of all of the key economic indicators used for the rankings, Victoria is not far behind, bolstered by the strength of high population driving housing demand. While the ACT comes in third with the softening in their job market, South Australia has lifted from sixth to fourth in the rankings in just one quarter.

CommSec Chief Economist Craig James said: “The latest data shows Australia’s domestic economies to be in good shape but with some differences in relative performance. Those economies benefitting from favourable population growth are performing best, reflected in stronger home building and retail activity.” 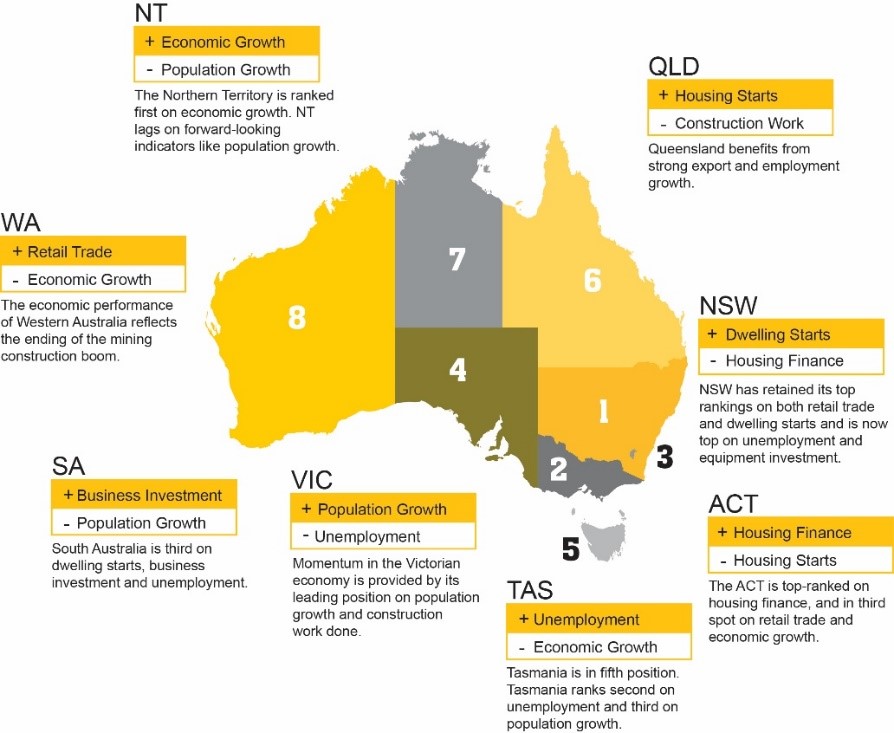 The aim is to find how each economy is performing compared with “normal”. And just like the Reserve Bank does with interest rates, CommSec used decade-averages to judge the “normal” state of affairs. For each economy, the latest level of the indicator – such as retail spending or economic growth – was compared with the decade average.

But as well as relative economic performance, some are also interested in economic momentum. That is, annual economic growth. A state/territory may have been under-performing, but if annual growth is rising, then this suggests that performance has scope to improve

NSW has retained its top rankings on both retail trade and dwelling starts and is now top on equipment investment and unemployment. NSW is second on three of the eight indicators. The lowest NSW ranking is third on housing finance

“NSW remains on top of the economic performance rankings but Victoria has narrowed the gap. Both states have relatively high population growth, under-pinning home building and retail spending,” James said.

“When looking across growth rates for the states and territories, Victoria out-performs the national average on all eight indicators,” said James.

The ACT has held third spot on the rankings. The ACT is top-ranked on housing finance, and in third spot on retail trade and economic growth.

“The ACT has lost economic momentum with the jobless rate lifting while experiencing a slowdown in new home building,” said James.

South Australia has lifted from sixth to fourth on the performance rankings this quarter. South Australia is third on dwelling starts, business investment and unemployment.

Tasmania is in fifth position. Tasmania ranks second on unemployment and third on population growth and the improvement is leading to stronger retail and home building.

“Tasmania slips from fourth spot to fifth with some softening in the relative position on retail spending and overall construction work done,” said James.

Queensland is in sixth position but there is little to separate it from South Australia, Tasmania and Northern Territory. Queensland benefits from economy-leading job growth and strong export growth – growing at a 39 per cent annual rate.

“Queensland’s relative position on retail spending has softened over the past quarter. The state is still being buoyed by strong export activity,” said James.

The Northern Territory retains its seventh position on the economic performance rankings. The Territory is top ranked on employment growth but has slipped from first to fourth on unemployment. And on forward-looking indicators like population growth, housing finance and home starts, the Territory lags other economies.

“The outlook for the Northern Territory continues to be constrained by weak population growth,” said James.

The economic performance of Western Australia continues to reflect the ending of the mining construction boom. But the job market continues to improve with employment growth the strongest in 4½ years.