New South Wales lifts from second to joint-first position while Western Australia climbs above the Northern Territory, according to the latest economic rankings.

In the latest economic performance report, Victoria ranked first for four of the eight economic indicators assessed in the analysis (economic growth, retail spending, unemployment and construction work done) while New South Wales was consistently strong across all indicators and ranked second on six of the indicators. 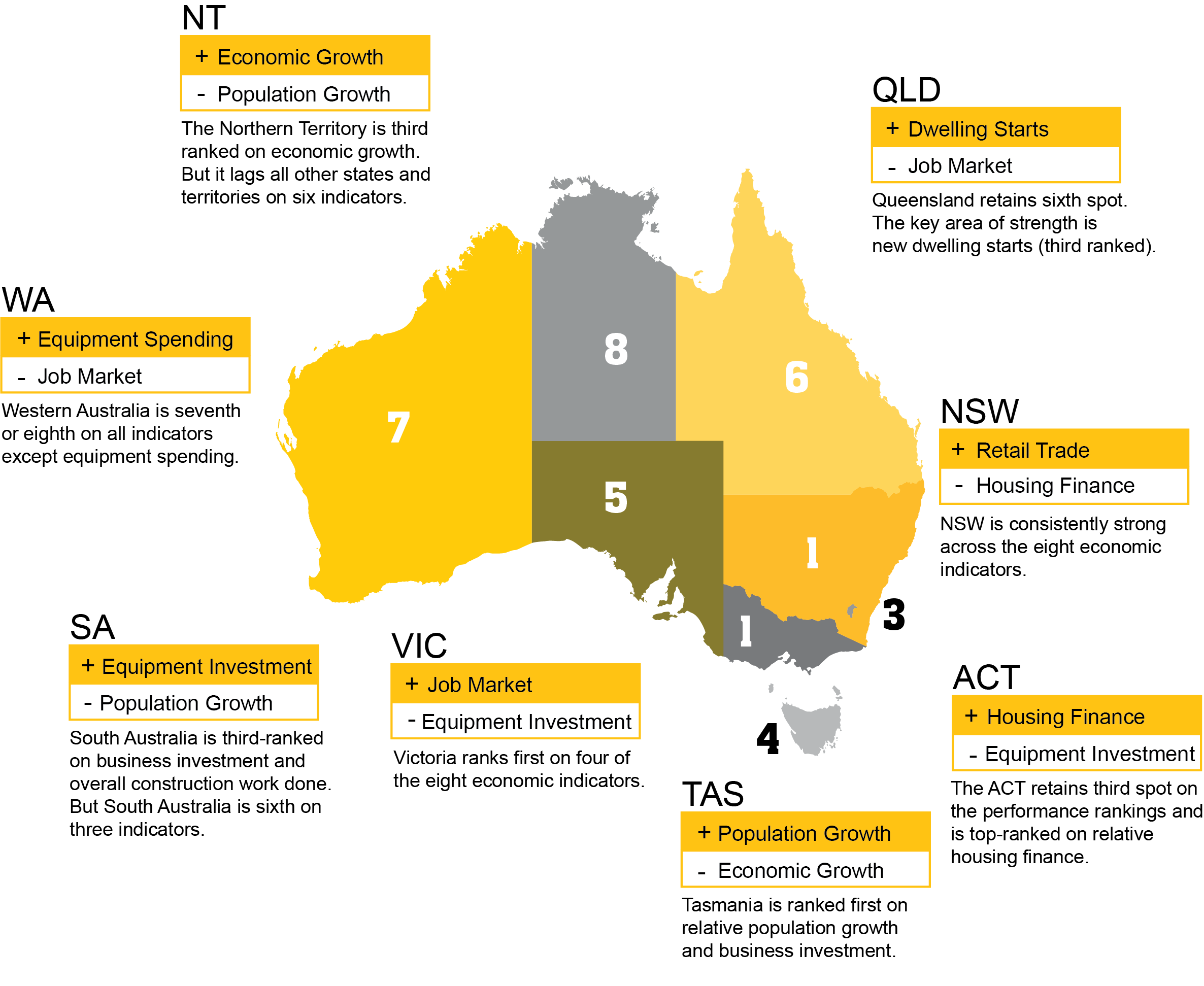 CommSec Chief Economist Craig James said: “When we compare the latest readings with decade averages, it remains a close race between Victoria and New South Wales. Victoria maintained top spot on relative economic growth and in New South Wales the trend unemployment rate of 4.3 per cent hasn’t been bettered in monthly records going back to 1978.”

This is the third and sixteenth time respectively that Victoria and New South Wales have taken the top spot since CommSec introduced the report in October 2009.

Victoria remained Australia’s best-performing economy for a third consecutive quarter. Victoria also secured top position for retail sales from New South Wales. Retail spending in Victoria was 18.1 per cent above decade average levels in the September quarter and was the strongest in terms of annual growth (up 4.2 per cent).

New South Wales climbed back to the top position (equal with Victoria) after ranking second for the previous two quarters. With no individual top spots, the state achieved six second position rankings out of eight indicators, in addition to being ranked third on population growth and fifth in housing finance.

“In New South Wales the trend unemployment rate of 4.3 per cent hasn’t been bettered in monthly records going back to 1978. Annual employment growth is strong at 2.9 per cent.,” Craig said.

“The Australian Capital Territory is experiencing relative strong population growth at 12.6 per cent above the decade average – second ranked for the nation – and this is clearly an important driver of the broader economy, especially retail spending and housing demand,” Craig said.

South Australia retained its fifth position courtesy of firm business investment and construction work, both ranked third nationally. “The total real value of residential, commercial and engineering work completed in trend terms in the September quarter across South Australia was at record highs, with construction work done 19.5 per cent above the decade-average,” Craig said.

South Australia improved its relative positions on equipment spending and housing finance but was also in sixth position for economic growth, population growth and dwelling starts.

“The key area of strength in Queensland is new dwelling starts that now sit in third spot nationally, with starts up 20 per cent on decade averages,” Craig said.

Western Australia has lifted from eighth to seventh on the performance rankings. But Western Australia continues to face challenges and ranked seventh or eighth on all indicators, except equipment spending (sixth position) which has been growing in annual terms for 18 months. The state has the second weakest job market, as well as the weakest relative positions on construction work and economic growth.

“There are some encouraging signs for Western Australia. Although population growth is below decade-averages, it is growing at the fastest rate in almost three years. While spending on plant and equipment is down 7 per cent on the decade average, it is up on a year ago and at near four-year highs,” Craig said.

The Northern Territory eased from seventh to eighth on the economic performance rankings, grouping broadly with Western Australia. Both continue to face challenges with the transition of resources projects moving from the production to the export phase. The Territory ranked eighth on six of the eight economic indicators (unemployment, retail spending, equipment investment, population growth, housing finance and dwelling starts) and ranked third on economic growth, up 23.5 per cent on the decade average.

“The Northern Territory population shrank by 0.1 per cent over the past year. This is the first time this has happened in 15 years and is clearly an important driver of the economy,” Craig said.

“The good news is that dwellings commenced in the territory lifted in the September quarter after hitting near 30-year lows in the June quarter,” Craig said.

Read the latest CommSec State of the States report.