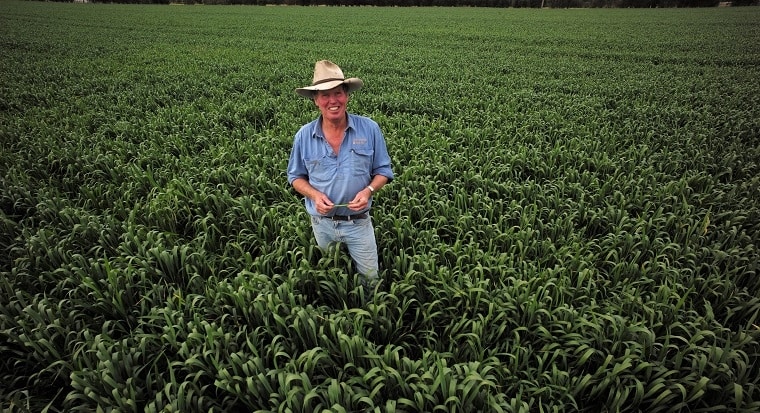 The Doolin family have invested heavily in irrigation systems that allow them greater control of their own production.

In 1924, RJ Doolin bought the family’s first farm, Myall Downs, outside the town of North Star in northern NSW.

Today his grandson, Malcolm Doolin, together with his wife Jenny, head the family livestock and cropping business from their property Glenhoma, just a few minutes down the road from Myall Downs, where their youngest son Angus lives and farms with his wife Camilla and their children.

Their older son Simon, his wife Sandy and their three children live a few minutes in the opposite direction at Cleveland, another Doolin property, which they have taken over in their own right.

Innovation is in the Doolins’ blood and between them they grow wheat, barley, chickpeas, oats, sorghum and cotton, as well as producing cattle.

“My grandfather brought in the first triticale to Australia in a matchbox,” Malcolm says.

The Doolins have invested heavily in pivot irrigation systems, which allow them greater certainty around production. They’ve also shortened their supply chain and taken control of their marketing. They have enough onsite storage for almost their entire crop and have their own fleet of trucks.

Although Simon has struck out on his own, he still works closely with his father and brother.

Angus says he and his brother have a good working relationship with their dad.

“As I see it, it’s three minds all working on the same goals,” he says.

This article is intended to provide general information of an educational nature only. It does not have regard to the financial situation or needs of any reader and must not be relied upon as financial product advice. Agri Insights canvassed 1,405 Australian farmers about their intentions for their farm enterprise over the coming 12 months, as well as the past 12 months. We spoke to a representative sample of rural producers across Australia. Fieldwork was executed by Fairfax Agricultural Research and Marketing using its database of more than 100,000 rural producers, and the research was managed by Kynetec. Calls were conducted in September 2017. Commonwealth Bank of Australia ABN 48 123 123 124 AFSL and Australian credit licence 234945.