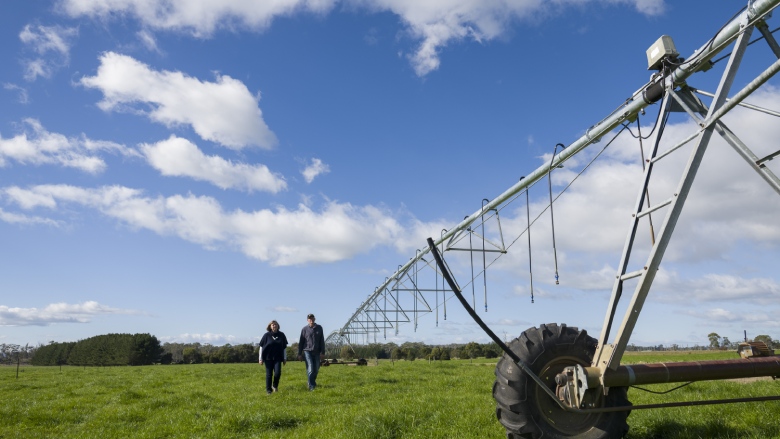 Opportunity for agribusinesses to capitalise on positive outlook.

While the impacts of coronavirus have been widespread across the economy, the outlook for many parts of Australia’s agribusiness sector is strong and growing, according to Commonwealth Bank’s Regional and Agribusiness division.

“There’s optimism and appetite for investment in the sector, and supporting agribusiness will be essential to growing the economy,” said CBA’s Executive General Manager Regional and Agribusiness, Grant Cairns.

Mr Cairns says Australian agribusiness is experiencing a level of opportunity across many sectors that has not been seen for years, with favourable market conditions, good seasonal conditions in most regions, and a consumer focus on fresh produce.

“The sector has a very strong outlook – largely due to recent rainfall in many regions across the country, combined with low interest rates, increased land values, many commodity prices holding strong and market demand for our Australian produce.

“That said, we know this isn’t the case for all, and we continue to support our customers who are faced with challenging conditions, as we assist others who are looking to target new opportunities.”

Mr Cairns said many agribusinesses, particularly in the southern states, had been seeking new funding over the past few months for working capital to expand, restock, sow crops, diversify their businesses, or invest in new machinery and technology to improve productivity.

“Many producers are looking to replace their older equipment, and take advantage of the Government’s investment allowance and the favourable seasonal conditions,” he said.

“Ag machinery financed through our asset finance team has seen an increase of 27 percent year-on-year, and three of the last four months have posted the strongest volumes of new asset finance business that we’ve seen in the past two years. This signals a strong trajectory into the new financial year where our agribusiness customers appear to be increasingly confident making these capital purchases.

“Our Regional and Agribusiness Banking team recently held a live webcast attended by almost 200 farmers and the sentiment was resoundingly positive. They’re keen to know how to protect themselves against some of the global market challenges, but importantly they’re very interested in capitalising on current opportunities.”

Mr Cairns says a growing consumer interest in the origins of food also represents a significant opportunity for agribusinesses to consider different products and new ways to take them to market.

“With a recent focus on food security and supermarket shortages, a light has shone on agriculture’s status as one of the most critical pillars of our economy.”

According to research from CBA’s Global Economic & Markets Research team, household spending at grocery stores and supermarkets – including spend on fresh produce – has increased considerably over the past few months, compared with the same period last year.

“Our data is telling us that spending at supermarkets and grocery stores has been consistently (each week) running about 25 percent higher throughout May and June and even this first week of July, compared to this time last year – I think this represents a real opportunity for the agriculture sector.”

“We’ve heard from many growers who see this change as an opportunity to rethink the old ways of working and consider new business models that might include consolidations, diversification and even collaborations with other producers to meet changing market demand and consumer preferences, and explore where their next opportunity might come from,” Mr Cairns said.

For example, Hussey and Co, a Victoria-based business which grows, packages and supplies gourmet baby salad leaf mixes for food service and retail sectors across Australia and internationally, has invested heavily in acquiring farms in different regions to support year-round supply.

The business sells into supermarkets, airlines and food service across a global market. Revenue came from a 50:50 split between food service and retail – so when coronavirus arrived, sales dropped by 40 per cent almost immediately.

“Because every part of the business is highly measured, we could watch what was happening and implement changes,” said owner Jeremy Haw.

As an example, Jeremy says his business data showed that a lot of the 1.5kg boxes of leaves they had been selling into food service were now going to green grocers. Instead of continuing to supply the bulk packs, Jeremy worked with the grocers and their agents to supply flow wrap boxes – cartons of smaller portions ready for sale. The grocers were happy to support the change, there was upside for the agents and it allowed Jeremy the benefit of selling a value-add product. He’s also introduced a new 500g salad bag for door-to-door delivery services, which have grown dramatically in the past few months.

“We’ve now recovered 50 per cent of the lost sales,” he said.

“We’re ready now for when the next opportunity comes, and it will, 100 per cent. When you have a clear intent to grow your business, you need to be able to move when the opportunity comes. We’re looking to link with great brands, considering joint ventures and consolidations. It’s important for agribusiness to be in a position to take up opportunities to sustain the global food supply.”

Jeremy says working closely with CBA has meant he has been able to act quickly when the opportunity is right.

“The bank can see that we are highly focused and measured and that we are always looking ahead, and they’ve been able to support us at each step,” he says.

Mr Cairns said that businesses looking to diversify need access to funds to enable them to change what they produce, how much they produce and where or how they market.

“Though the international trade environment remains volatile, I think farmer confidence in many areas is at a high, and Commonwealth Bank is ready to support agribusinesses, however we can.

“It’s important that agribusinesses are able to grab opportunities that are there for the taking, and for banks to play a role in supporting them to unlock these opportunities and identify areas of growth,” he said.