The latest data from the Commonwealth Bank Household Spending Intentions (HSI) series for October shows mixed results across key spending sectors of the economy as the effects of the Victorian shutdown lingered. CBA Chief Economist Stephen Halmarick said that while there has since been positive signs so far for the economy in November – including further easing of monetary policy by the Reserve Bank of Australia, as well as easing of restrictions in Victoria – October’s mixed spending intentions highlight the drag the Victorian shutdowns had on the national economy.

Mr Halmarick confirmed that some weakness was evident in health & fitness, education and motor vehicle spending intentions, all led lower by a decline in online search activity.

“Notwithstanding this mixed result, other data points to an improvement in the Australian economy in the early stages of November.

“Spending on CBA credit/debit cards has picked up as the Victorian economy opens up. In addition, low interest rates are encouraging an increase in home loan applications, especially for fixed rate mortgages by owner-occupiers. A stronger housing market should support spending intentions in the months ahead – as should the recent significant easing of monetary policy by the Reserve Bank of Australia,” said Mr Halmarick. 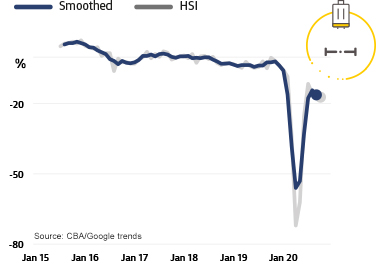 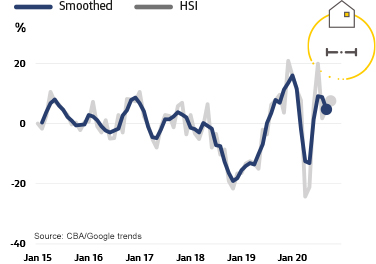 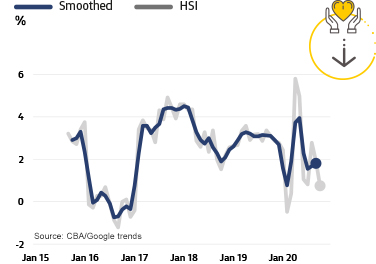 The information contained in this media release is published solely for information purposes and provides general market-related information, and is not intended to be an investment research report. This media release has been prepared without taking into account your objectives, financial situation (including the capacity to bear loss), knowledge, experience or needs. Before acting on the information in this media release, you should consider its appropriateness and, if necessary, seek appropriate professional or financial advice, including tax and legal advice. The data used in this media release is a combination of the CBA Data and Google Trends™ data. Google Trends is a trademark of Google LLC. The term ‘CBA Data’ refers to the proprietary data of the Commonwealth Bank of Australia ("the Bank") that is sourced from the Bank’s internal systems and may include, but is not limited to, credit card transaction data, merchant facility transaction data and applications for credit. The Bank takes reasonable steps to ensure that its proprietary data is accurate and that any opinions, conclusions or recommendations are reasonably held, or are made at the time of compilation of this media release. As the statistics take into account only the Bank’s data, no representation or warranty is made as to the completeness of the data and it may not reflect all trends in the market. All customer data used or represented in this media release is anonymous and aggregated before analysis, and is used and disclosed in accordance with the Bank’s Privacy Policy Statement.