Prospective spending on residential property neared a record, and spending plans for entertainment, education and health and fitness categories also ticked up, according to combined CBA and Google data for February.

CBA Chief Economist Stephen Halmarick said the overall improvement in the HSI data is consistent with other signs that Australia’s economy continued to recover in the early months of 2021.

Fourth quarter data showed that economic growth improved further at the end of 2020, with a “V-shaped” recovery and we now expect that the Australian economy will grow by 4.4 per cent in 2021,” Mr Halmarick said.

One risk to this outlook is the upcoming expiry of the JobKeeper program, though Mr Halmarick said recent CBA research suggests any effect from removing the labour market support measure is likely to be temporary.

“Our view is that the negative impacts of the end of JobKeeper will be short-lived and that the strength in the labour market, the large savings pool generated throughout 2020 and, as shown by the HSI, the solid momentum in spending and home buying, will see the economy transition successfully through the end of JobKeeper,” he said.

Home buying intentions continued to march higher in February, with the smoothed series reaching its highest level since the start of the Household Spending Intention data series in 2015. Both mortgage applications and Google searches were up in February in comparison to the month and year prior.

Spending intentions for education improved further in February 2021. Google searches were up sharply, though still well below levels recorded in February 2020. And while transaction value was lower this year, transaction quantity was higher.

Health and fitness spending intentions also rose last month, as an increase in actual spending more than offset a drop in Google searches. 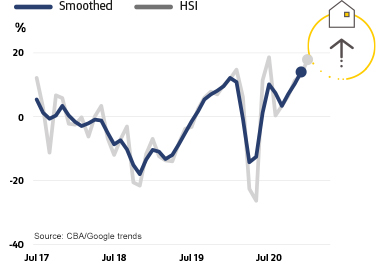 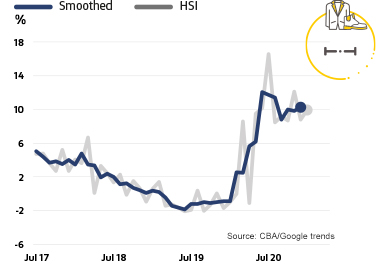 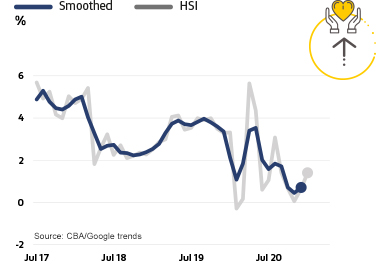 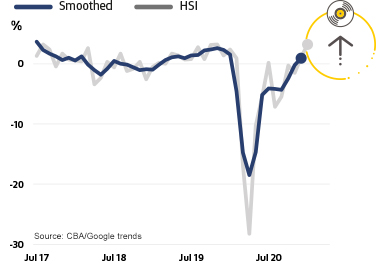 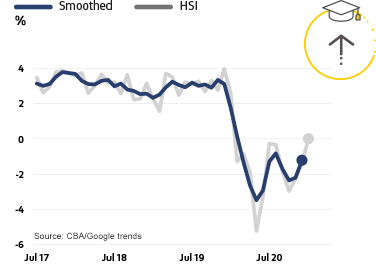 The approach focuses on Australian households and their spending intentions. Near real-time spending readings from CBA’s household transactions data was combined with relevant search information from Google Trends to map the data results on consumer spending. Households are the dominant part of the economy and drive much of its activity and volatility, and this combination adds to insights on prospective household spending trends in the Australian economy.

The information contained in this media release is published solely for informational purposes and provides general market-related information, and is not intended to be an investment research report. This media release has been prepared without taking into account your objectives, financial situation (including the capacity to bear loss), knowledge, experience or needs. Before acting on the information in this media release, you should consider its appropriateness and, if necessary, seek appropriate professional or financial advice, including tax and legal advice. The data used in this media release is a combination of ‘CBA transaction data’ and Google Trends™ data. Google Trends is a trademark of Google LLC. The term ‘CBA transaction data’ refers to the proprietary data of the Commonwealth Bank of Australia ("the Bank") that is sourced from the Bank’s internal systems and may include, but is not limited to, credit card transaction data, merchant facility transaction data and applications for credit. The Bank takes reasonable steps to ensure that its proprietary data is accurate and that any opinions, conclusions or recommendations are reasonably held, or are made at the time of compilation of this media release. As the statistics take into account only the Bank’s data, no representation or warranty is made as to the completeness of the data and it may not reflect all trends in the market. All customer data used or represented in this media release is anonymous and aggregated before analysis, and is used and disclosed in accordance with the Bank’s Privacy Policy Statement.