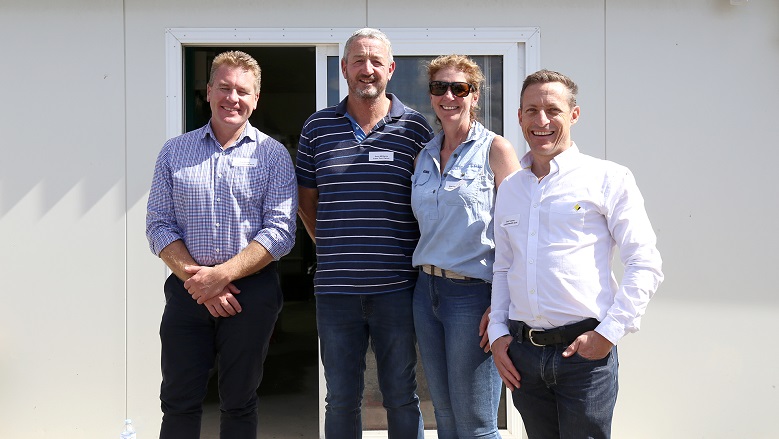 More Aussie farmers are investing in agriculture technology to increase efficiencies in the paddock and get more time for themselves.

Victorian farmers Evan and Sheriden Williams say their decision to invest in agricultural robots has given them a much needed work-life balance and renewed love for the industry.

The couple run the Williams-Lowndes dairy farm in Victoria and made the decision a few years ago to replace their old rotary milking parlour with a robotic operating system.

“We’re in our 50s now and our bodies were tired from cupping cows up in the rotary dairy constantly and we were getting disillusioned. Our kids and grandkids are also on the farm and we decided investing in technology would progress the business and make things easier for the whole family,” Ms Williams said.

“When the robots came, we both fell back in love with dairy again.”

The emergence of agriculture technology or ‘Agritech’ is creating significant domestic benefits for farming businesses and others in the agri-food supply chain.

“We’re no longer getting up at 5am every day to milk the cows. We have a new sense of flexibility with our day becoming whatever we make it – we might even sleep in, have a cuppa and get to work at 7am!”

“With the robots, the cows come in over a 24 hour period, whenever they want to, it’s really up to them. The cows basically run the show now.”

The pair were pleasantly surprised by how quickly the cows adapted to the change – with the carefully placed set of cameras and sensors creating a seamless process for the cows and the overall milking process.

“They come back to the dairy, get some grain, get milked and switched to another part of the farm. And hopefully they do that at least twice a day. Some cows come in more than 3 times a day and some only once. It’s down to the cow.”

With support from CBA’s lending solutions, the farm is currently planning to expand their technology investment, awaiting two additional robots to create more time and space for the robots to reach the growing herd of 320 cows.

“We’re also hoping to see a boost in milk once the two extra robots are installed over the coming months. Already we’ve noticed the health and overall immunity of our cows has improved and they are producing consistently high quality milk.”

The Williams’ farm isn’t the only one embracing the benefits of Agritech, as other producers are looking to incorporate similar systems to support their operations.

“The industry has had a difficult few years but as things begin turning around, there are moments of positivity that make it all worthwhile. For us, the robots have helped create many of those moments and we imagine that as the interest and investment in digitisation grows, others will see similar benefits as well.”

CBA’s General Manager of Agribusiness Tim Harvey said the growing momentum of Agritech is creating unique opportunities for the food and fibre sector across the country.

“Australian agribusinesses have always been innovative and the rise in ag-specific technology reflects this. It’s producing new commercial results and growth opportunities for customers and the industry,” he said.

CBA has backed the rapidly evolving Agritech sector and today is announcing a new partnership with the Australian Agritech Association (AusAgritech).

The chairman of AusAgritech, Andrew Coppin, said: “It’s a pleasure to welcome a forward-thinking bank like CBA as Foundation members of AusAgritech.”

“As Australia’s leading technology bank, we are excited to be partnering with AusAgritech who share the common goal of supporting the continued progress of the Ag industry – enabling our farmers and growers to deliver more sustainable and profitable outcomes through technological innovation,” Mr Harvey said.

This innovation will be on display this weekend at Farm World, Victoria’s premiere Field Day in Gippsland. CBA’s Regional and Agribusiness bankers will be onsite to discuss opportunities for investments in technology and machinery and lending solutions to back customers’ growth.

“Commonwealth Bank is proud to continue the more than 30 year tradition of partnering with Farm World, as both share the common commitment of helping Australian farmers and regional businesses realise their full potential,” Mr Harvey said.