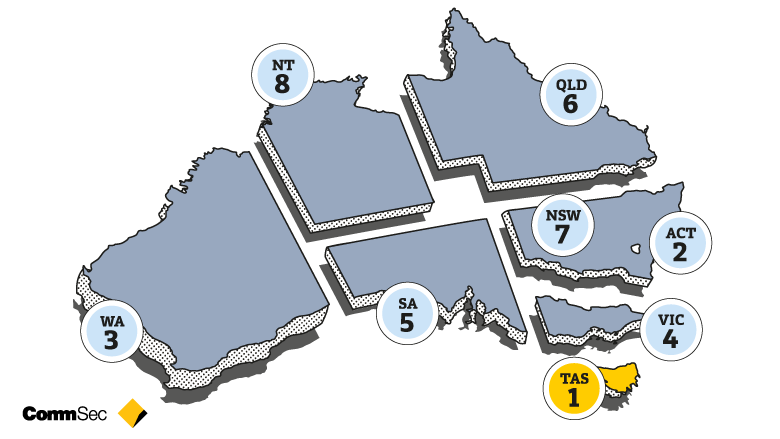 CommSec State of the States: Tasmania firmly on top as Western Australia jumps to third

The latest CommSec State of the States report shows a marked lift in the ranking of Western Australia in the latest quarterly economic report.

Tasmania and the ACT continue to lead the latest economic performance rankings while Western Australia has surged ahead to third place from sixth in the last quarter, according to the latest CommSec State of the States report.

The CommSec State of the States report is now in its 12th year and uses the latest available information to provide a valuable economic snapshot of how Australia’s state and territory economies are navigating the COVID-19 pandemic.

After leaping three spots, Western Australia is now sitting in third place on the rankings, its highest placement in six years. Victoria is sitting at fourth, followed by South Australia in fifth place.

Tasmania has topped the rankings for the fifth consecutive quarter and leads on three of the eight indicators assessed.

The ACT economy remains in second position, continuing its best performance in the economic rankings over the past four years.

Queensland has dropped one place to sixth and NSW has dropped back to seventh. The Northern Territory remains at eighth place for the 10th consecutive quarter.

CommSec Chief Economist Craig James said: “Tasmania and the ACT have firmly held their positions at the top of the performance rankings due to above-average population growth in Tasmania, and a strong job market in the ACT. As a result, it’s unlikely we’ll see any considerable change at the top of the rankings in the near future.”

“The West Australian economy has significant momentum provided by mining and home building. In fact, skill shortages are identified in many building trades.

“Queensland also has scope to lift its ranking in 2021 due to improvement in the job market, rising in-bound migration and increased domestic tourism demand.”

The State of the States report uses the most recent economic data available, however while some data relates to the December quarter, other data – such as unemployment – is timelier, covering the month of March.

To access the full State of the States Report for April 2021, including a breakdown of each economic indicator and additional commentary from CommSec Chief Economist, Craig James, visit www.commsec.com.au/stateofstates