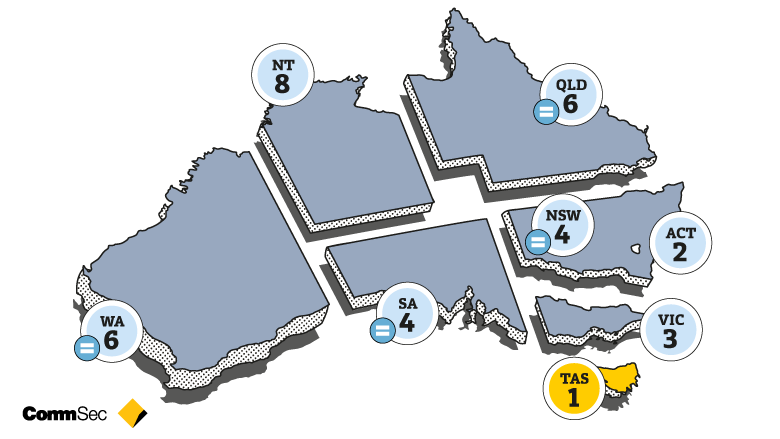 The latest CommSec economic rankings reveal how the pandemic recession is hitting some states and territories harder than others.

Tasmania remains Australia’s best performing economy, with the ACT climbing into second place and Victoria slipping further behind, according to the latest CommSec State of the States report.

Using the latest available information, the CommSec State of the States report provides a valuable economic snapshot of how Australian state and territory economies are performing in the recession caused by the coronavirus pandemic.

The State of the States report is now in its 12th year, and for the first time Tasmania has topped the rankings for the third consecutive quarter. The Apple Isle now leads rankings on five of the eight indicators assessed. In the previous survey, three months ago, Tasmania took top spot from Victoria after sharing the mantle of top performing economy in the April report.

CommSec Chief Economist Craig James said: “We continue to see compression in the rankings. The big improvers over the past quarter were the ACT, South Australia and Western Australia. The biggest losers were Victoria, NSW and Queensland.

“Based on the latest economic data readings, Victoria has potential to slip further down the performance rankings while Tasmania and the ACT consolidate positions in the top two spots. The other economy with momentum on its side at present is Western Australia, benefitting from faster population growth, solid mining activity and success at suppressing coronavirus cases.”

The latest State of the States report uses the most up-to-date economic data. While some data relates to the June quarter, other data – such as unemployment – is timelier, covering the month of September.

“The coronavirus crisis is causing mixed operating conditions across industries and across states and territories. A key factor driving the relative success in economic performance has been the relative success in suppressing the virus. Suppressing the virus increases mobility - allowing the re-opening of businesses and for workers to get back to work.

“Future reports will prove valuable as we track how each state and territory navigates the crisis, especially the recovery phase. State and territory governments have been active in providing stimulus and support measures for their economies. And the Federal Government and the Reserve Bank have provided significant broader nationwide support for business and consumers,” Mr James said.

To access the full State of the States Report for October 2020, including the detailed breakdown of each economic indicator and additional commentary from CommSec’s Chief Economist, Craig James, visit www.commsec.com.au/stateofstates