Dads get a new perspective on parental leave

Dads get a new perspective on parental leave 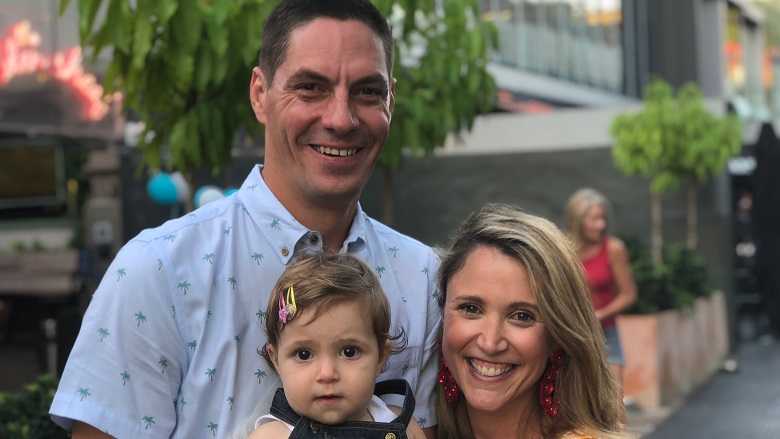 Supporting families is crucial to building an engaged and healthy workforce.

"When Gracie was first born it was a bit of a blur," Andrew Hagger says.

"Those surges of emotion you have when you comprehend that there’s a new person, and your life now revolves around them.”

The life of a new dad is an eye-opener, says Andrew, who is GM Strategy and Operations, Business Banking at Commonwealth Bank.

"Before I took leave, many people suggested that it was going to be a tougher job than my day job, and it was certainly very challenging but also very rewarding."

Like Andrew, more of our CBA dads are taking time off to support their families following the birth of a baby.

The good news is that attitudes are changing. Our research shows the overwhelming majority of Australians (93 per cent) feels it’s more acceptable for men to take parental leave than it was five years ago.

The research also reveals a sense of optimism that greater take-up of parental leave by men will provide greater support for gender equality.

Ninety per cent of Australians believe men taking parental leave supports women to succeed in their careers, according to our research. Eighty-four per cent of those we surveyed believed equal parental leave will ultimately lead to greater gender equality in the work place.

Andrew says he and his wife Olivia had made plans about parental leave before Gracie was born.

“But as Gracie was our first child, we didn’t quite know what to expect or how we would feel," he says.

"It ended up working well, in that my wife went back to work part time after four months and then full time when I took extended leave."

“It was just great to spend time and bond with my daughter at such a precious age. I also wanted to support Olivia’s career,” Andrew says. Olivia is CEO of business women's network Business Chicks.

Commonwealth Bank's Head of Diversity and Inclusion, Liz Griffin, says it's important that employers support a gender-neutral approach to parental leave. “Although men taking parental leave is more accepted than it used to be, there's always room to improve," Liz says.

"To normalise taking time off after the birth of a child, it’s important to create an environment where parents can effectively manage work and family responsibilities. Supporting families is crucial to building an engaged and healthy workforce."

Last year, there was a 22 per cent year-on-year increase in the number of male Commonwealth Bank employees taking time off to share the responsibilities of childcare.

Andrew says knowing CBA supports all employees in taking parental leave was a key factor in his decision to take time out from work. But also put in place a plan that meant things in the office could continue to run smoothly while he was on leave.

“I started the parental leave conversation with my manager quite early and that allowed us to really plan out how we might structure my team while I was away," he says.

“I felt very supported at work and had lots of positive feedback from across the organisation, including mentors and my team, who were really pleased to see me taking the time to step out of my job and spend time with my family.

Role-modelling and sharing experiences can help blokes overcome their concerns about taking time out to look after kids, Andrew says. And change is best driven from the top.

“I think if senior leaders role model the behaviour, then hopefully we can start to change those perceptions, whether it be parental leave or other types of flexible working arrangements," he says.

"Almost all my entire team have some form of flex in their current role. If I get the chance I encourage every single person I possibly can to take advantage of the benefits the group provides.”

Andrew says taking time out has also had benefits for him at work.

“When I returned to work I felt refreshed, mentally and physically, and I was able to focus on my work knowing that everything had settled at home. I came back to work with a positive mindset and a new perspective.”

Commonwealth Bank research was commissioned by Commonwealth Bank and undertaken by independent research company, YouGov Galaxy as part of an online Omnibus. The survey was conducted during April 2018 with nationally representative survey of 1,017 Australian respondents aged 18 years and older.