More than 70 per cent of Australians still consider property ownership to be the Great Australian Dream, new CBA data has found.

Commonwealth Bank’s Home Own research found 75 per cent of those under the age of 30 believed property ownership to be the Great Australian Dream. Meanwhile, 69 per cent of those aged 30 and over felt the same way.

The data also found that a growing proportion of Australians now considered the dream of property ownership to be more achievable than ever before.

When asked whether or not the Great Australian Dream was within reach for first home buyers, 91 per cent said it was.

By comparison, in 2018, one in every five Australians admitted that property ownership was completely out of reach.

“Over 90 per cent of Australians said property ownership was achievable for potential first home buyers so long as they are willing to make sacrifices with regards to their spending.

“This data suggests Australians are taking an increasingly optimistic attitude towards the property market.” 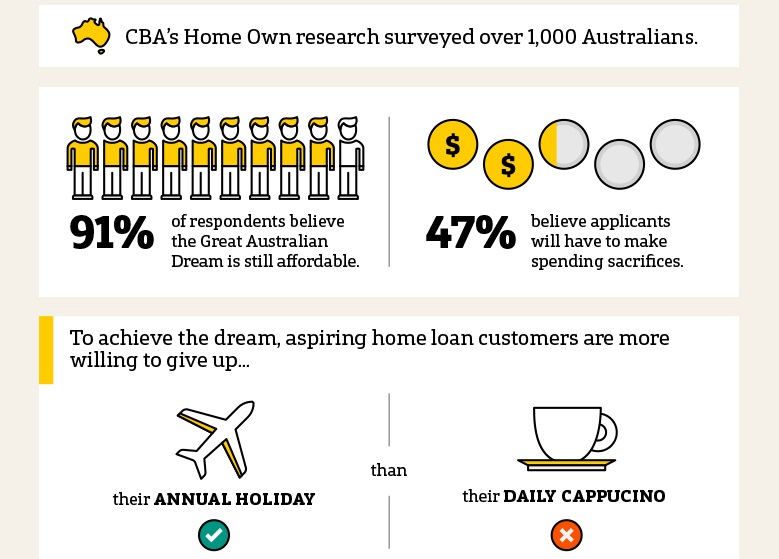 According to the data, attitudes towards the property market did differ slightly from state to state.

Mr Huggins said for those first home buyers who were currently considering whether they could make their property ownership dreams a reality, now was a good time to be in the market.

“Interest rates are currently sitting at historical lows and, in many parts of the country, property prices have come off their peak, representing a good opportunity for home buyers to start shopping for a property,” he said.

“We have a raft of competitive home lending solutions and our lenders are on hand to help step home buyers through the property purchasing journey.