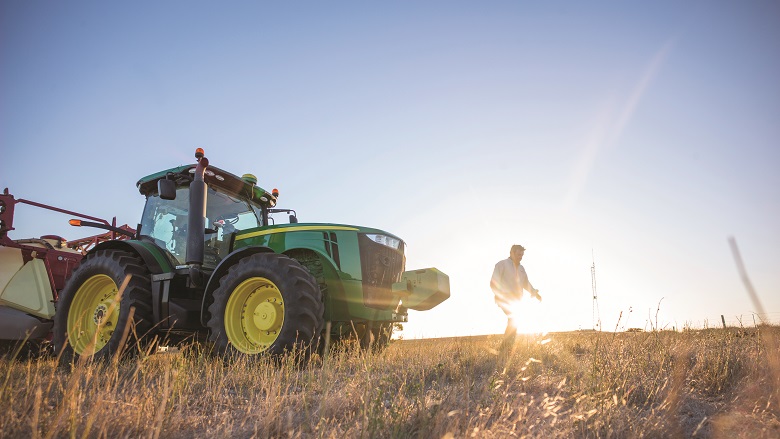 Farmers are banding together to find the best use of equipment with the help of Commonwealth Bank and its Smart Assets experiment.

When Andrew Johnson needed to purchase a new tractor to support his cropping operations, he approached two neighbouring farmers and they agreed to share ownership and use the tractor co-operatively.

The three farmers had formed a legal entity for the finance and ownership of the new tractor, and fitted it with sensors. However, the data received was hard to read and review.

By joining the Smart Assets experiment, “CommBank assisted in making the data readable and usable, by working out a way to harness the variable data inputs – and make sense of what they were telling us”, Johnson says. “We were then able to bring that back in to make decisions on how we operated our machines.”

To help understand the data and usage of the asset, CBA’s Smart Assets experiment developed a proof of concept (POC) asset management and sharing platform using Internet of Things (IoT) devices connected to a crop sprayer and machinery.

The simulated platform enabled Mr Johnson and the partnership to view real-time location, usage and performance of the asset not previously realised.

As part of the platform, CBA built a dynamic dashboard that visually presented the operational performance of the crop sprayer. The data was instantly captured and presented back to the farmers, allowing them to make on-the-spot decisions on how to best operate the machine, as well as guide decisions on maintenance and renewal.

Digitised business assets connected to the Internet of Things (IoT) and managed with smart contracts and blockchain technology – or ‘smart assets’ – are predicted to become commonplace in many industries of the future. 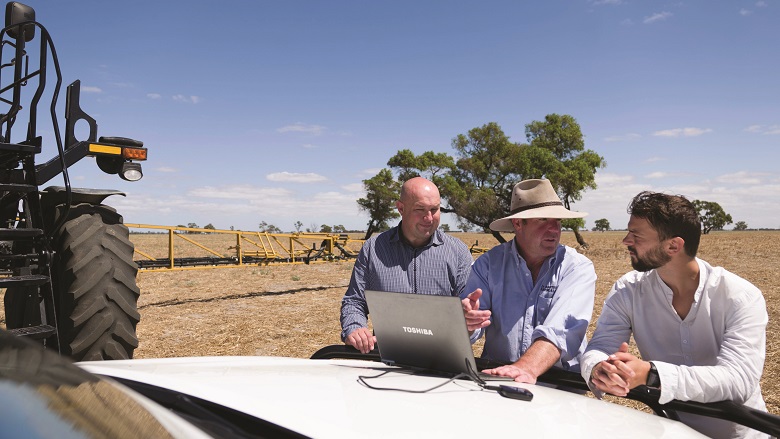 “Originally, we had a data capturing system that was fairly weak and very clunky, to the point we weren’t using it. To extract that data and develop it, we needed assistance,” Mr Johnson says.

“It’s become incumbent on us to set up the systems of today for tomorrow. Agriculture is merging into the next phase of its life, and business is going to be right behind that. When I look at the future of agriculture, what we did 20 years ago, if you did that now you couldn’t survive – it’s too inefficient.”

The Smart Assets experiment in South Australia that helped Mr Johnson and his partners was developed with CBA and EY (Ernst & Young) to investigate the potential benefits of sharing high-value assets between businesses, using a crop sprayer as a POC.

Tim Harvey, CBA’s General Manager of Strategy, Innovation and Operations for Regional Agribusiness Banking, said: “High-value assets are ripe for innovation. Owners often pay big money upfront for the asset, but it causes a drag on profit margins if it lies idle, waiting to be used. In farming, we know it’s very common for specialised and expensive equipment to be underutilised for much of the year.”

Many agribusinesses are looking at their high-cost assets and wondering how they can increase how much the equipment gets used and how they might reduce operating costs, Mr Harvey says.

“From listening to these customers, it was clear there’s a lack of understanding of how to collect and take advantage of data that those assets could provide. We considered CBA’s expertise from other industries, including the Daily IQ dashboard for retailers, and knew the value agribusiness customers could gain from data presented in a simple and easy-to-interpret way.”

The future of sharing assets

CBA and EY also looked to the future of asset sharing and how a platform may function to support the sharing of high value assets. As part of the experiment, the dashboard was built on blockchain technology allowing a possible future state of sharing and fractional ownership.

Managed through smart contracts, the platform aimed to enhance trust and transparency of asset availability to all participants by integrating smart-lock functionality that could be automatically locked or unlocked when a payment is made. This would enable assets to be easily shared without requiring any intervention from the owner.

According to Paul Brody, Principal & Global Innovation Leader, Blockchain Technology at EY, “We’re headed for a tectonic shift in how we think about the way enterprises and assets are managed. It will be an epic battle of the business models.”

Mr Harvey continued: “The interplay between blockchain, smart contracts and IoT with high-value assets is a significant development towards maximising the value that businesses get out of their assets. By developing a platform that offers fractional ownership as well as a sharing marketplace, customers will be able to reduce costs of asset ownership and maximise utilisation.”

Check out the Mt Boothby Pastoral Company case study and video below.

You can also find out more about machine-to-machine economy in our story from November 2017.

For such a diversified business to succeed, it needs a lot of specialised and expensive equipment, some of which sits idle for much of the year. As a farmer constantly on the lookout to streamline his operations and costs, he felt there must be a better way to access the equipment he needs.

When Mr Johnson needed to purchase a new tractor to support his cropping operations, he decided to try something new. Instead of funding the equipment himself, he approached two neighbouring farmers and agreed to share ownership – and use the tractor cooperatively.

The farmers formed a legal entity under which they could share the finance and ownership of the new tractor. CommBank is supporting this move by working closely with the partnership to understand the potential of smart assets in agribusiness.

The tractor was fitted out with sensors that provided data on its usage and maintenance status. However, Mr Johnson and his new partners found it was not in a form that made it easy to export and develop reports.

“Originally, we had a data capturing system that was fairly weak and very clunky, to the point we weren’t using it. To extract that data and develop it, we needed assistance.”

Mr Johnson's Relationship Manager at CommBank, Corey Barlow-Jensen, introduced the challenge to the Bank’s innovation team. They worked with Mr Johnson and his partners to better understand how the machine was used and to access the data insights they needed to optimise use of the asset.

Mr Johnson said that the partnership brought new technical skills and resources to the table, enabling the farmers to use data from the equipment to make sounder business decisions.

“In particular, the people at CommBank assisted in making the data readable and usable, by working out a way to harness the variable data inputs – and make sense of what they were telling us,” he said. “We were then able to bring that back in to make decisions on how we operated the machines.”

“Without the people at CommBank we couldn’t make that happen,” he said.

While initially other farmers were sceptical about the arrangement, Johnson says that many are watching to see how this new ownership model plays out.

“Initially we heard ‘that won’t work’ … now we’re at the point where we get calls asking to be involved or how you go about setting these types of things up. While change is hard to take, they’re prepared to listen and watch – I guess there are lots of people watching where we are at the moment.”