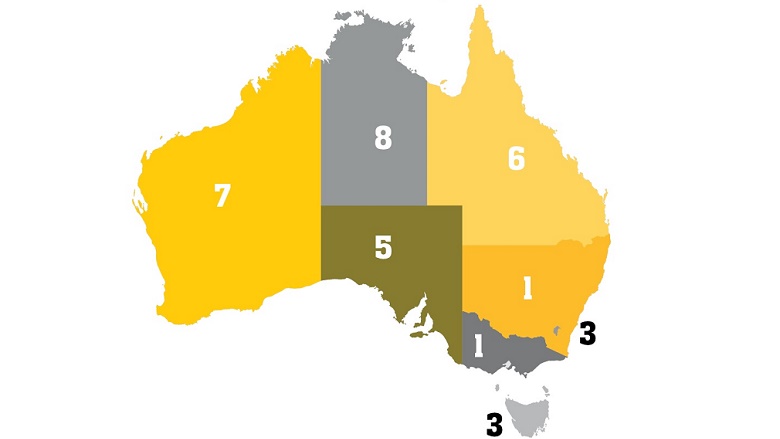 For the second consecutive quarter, solid population growth and strong job markets have driven Victoria and NSW to share the title of the best performing economies across Australia, according to the latest CommSec State of the States report.

In the latest economic performance report, NSW continues to be consistently strong across the indicators and is second-ranked on seven of the eight indicators while Victoria again ranked first on four of the economic indicators: economic growth; retail trade; the job market; and, construction work done. 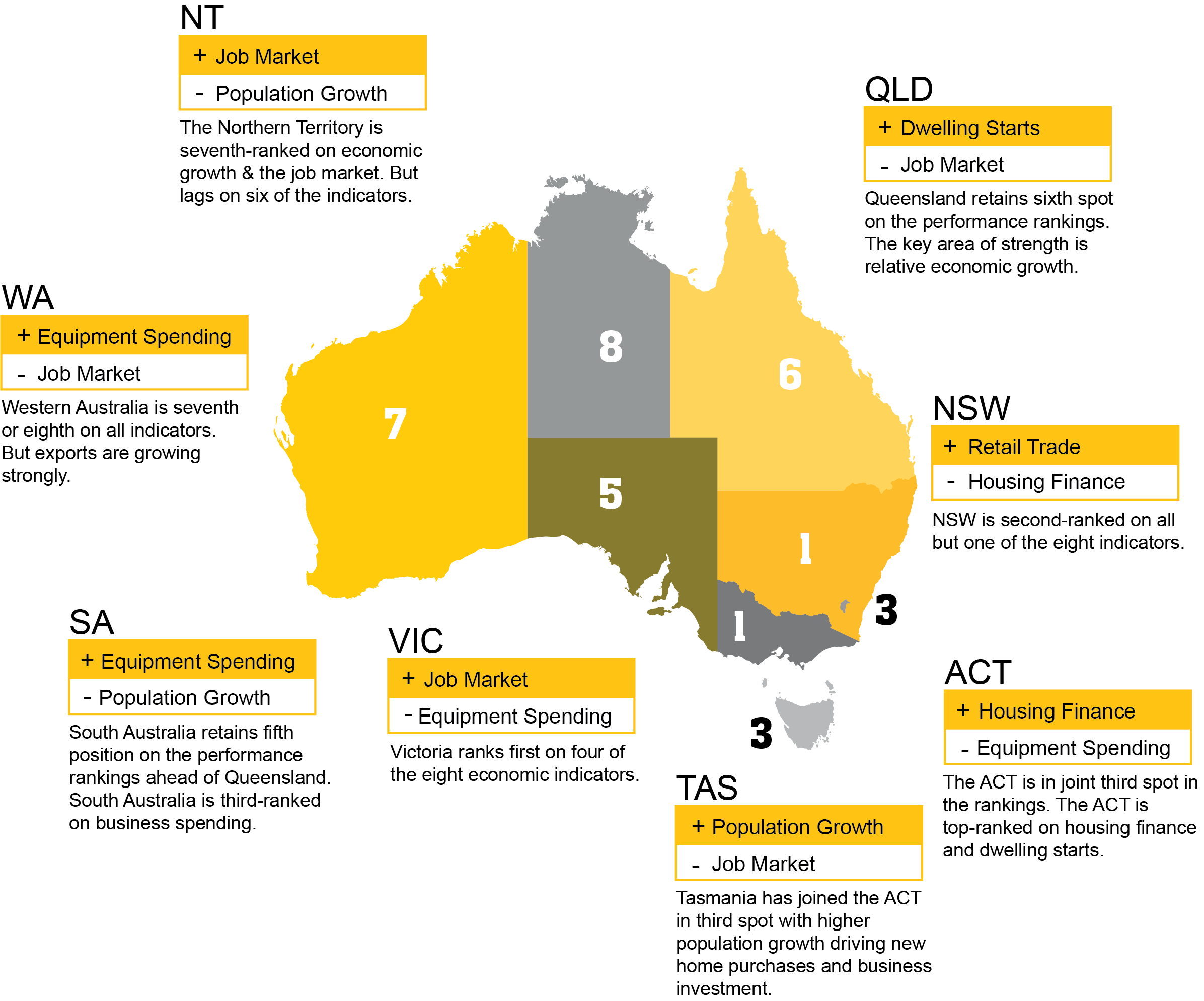 CommSec Chief Economist Craig James said: “Despite a lot of negative talk around the national economy over the last few months, it appears the underlying economic conditions of the majority of the states remains strong.”

“Both the nation’s largest states, NSW and Victoria, have broad-based economic strength, underpinned by population growth, construction and investment activity. Strong job markets provide support for local economies but housing markets will continue to soften in the period ahead – both home building and home loans.”

This is the fourth and seventeenth time respectively that Victoria and New South Wales have taken the top spot since CommSec introduced the report in October 2009.

Comparing annual growth rates for key variables, Victoria is top on growth on three measures, (retail trade, unemployment and population) ahead of Tasmania on two (construction work and housing finance). The ACT, South Australia and Western Australia lead the way on one measure each (see below for specific details).

For the fourth consecutive quarter Victoria has remained Australia’s best-performing economy. Victoria maintains top spot for economic growth as economic activity for the December quarter was 26.9 per cent above decade average levels.  The state’s job market also remains strong, with trend unemployment standing at 4.6 per cent or 18.7 per cent below the decade average.

“We continue to see broad economic strength for the Victorian economy. Over the quarter, Victoria fell one place on two indicators and rose one place on two other indicators but is continuing to be buoyed by strong economic growth, construction work and retail spending,” Mr James said.

If rolling annual new vehicle registrations are added to the list of indicators, Victoria would take the mantle as best-performing economy ahead of NSW.

NSW has retained its position as equal first with Victoria, with the state performing consistently strong across the indicators. NSW is now second-ranked on seven of the eight economic indicators, up from six in the last report. Lower house prices are having an effect with NSW experiencing a slowdown in home lending as housing finance commitments are down 4.9 per cent on the decade average.

“Trend unemployment of 4.3 per cent in NSW continues to be at monthly levels not seen since 1978. Strong job markets in both NSW and Victoria have continued to provide support for local economies but housing markets will continue to soften in the period ahead – both home building and home loans,” Mr James said.

The ACT is joined by Tasmania in third spot on the performance rankings. The biggest move by the ACT on the individual indicator rankings was losing two spots on relative population growth and losing one position on business investment.

“The ACT is now joined in third spot on the rankings by Tasmania. The ACT is top-ranked on housing finance, which is up by 17 per cent on the decade average, and dwelling starts, up 66.6 per cent on the long term average.  The ACT is also third ranked on retail trade and unemployment,” Mr James said.

Tasmania is now in equal third position and gained two spots on relative economic growth and dwelling starts but lost two spots on the job market.

“Tasmania remains the strongest on the relative population measure, with its 1.15 per cent annual population growth rate almost 100 per cent above the decade-average rate,” Mr James said.

South Australia remains in fifth position in the rankings, improving its relative position on the job market but losing two spots on construction work. South Australia continues to see strong retail spending (up 10.5 per cent on the decade average) and equipment finance (up 9.4 per cent).

“South Australia retains fifth position on the performance rankings ahead of Queensland. South Australia is third-ranked on business investment, fourth on the job market and housing finance and fifth on two indicators,” Mr James said.

Queensland is in sixth position in the performance rakings but has narrowed the gap to South Australia. Queensland has lifted on the back of strong economic growth, lifting two spots since the last report, and is now seeing economic activity up 20.5 per cent on the decade average.

“Queensland retains sixth position but has been the big improver over the last quarter. The key area of strength is relative economic growth, third-ranked. But Queensland is fourth on dwelling starts, fifth on relative population growth and the job market and sixth on four indicators,” Mr James said.

Western Australia remains in seventh spot on the economic performance rankings. However, Western Australia records the fastest nominal economic growth in the country, up 9.0 per cent in the year to December.  Also encouragingly, population growth is now the strongest in three years.

“Western Australia retains its seventh position on the economic performance rankings and can be broadly grouped with the Northern Territory. It has ranked seventh on six of the indicators and eighth on relative economic growth and the job market. However there is underlying positive news:  annual population growth is now the strongest in three years, exports have been rising steadily, up 17.7 per cent on a year ago, and unemployment is at 15-month lows in trend terms,” Mr James said.

The Northern Territory remains in eighth position, ranking seventh on economic growth and the job market. And it lags all other states and territories on the other six indicators.

“Both Western Australia and the Northern Territory continue to face challenges with the transition of resource projects moving from the production to the export phase. For the Northern Territory, declines in the state’s population, down 114.8 per cent on the decade average, continue to drag on the economy. Encouragingly, exports are rising strongly and are up 38.7 per cent on a year ago,” Mr James said.

Read the latest State of the States report

CommSec State of the States: Victoria takes top spot for the first time