CommSec State of the States: Vic remains number one 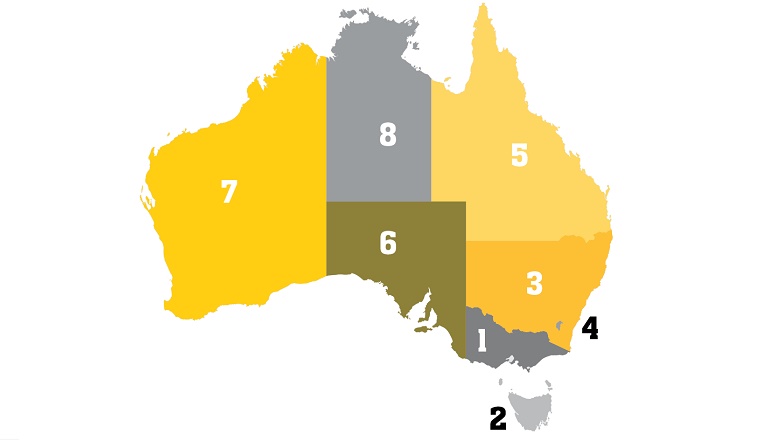 Latest economic rankings show that Victoria remains the strongest performing economy in the nation while Tasmania has edged past NSW into second spot.

Victoria remains Australia’s best-performing economy, leading the overall economic performance rankings, but Tasmania has lifted into second spot according to the latest CommSec State of the States report.

In the latest economic performance report, Tasmania has edged up in the performance rankings, overtaking NSW into second position. Tasmania is ranked first on relative population growth, dwelling starts and equipment investment and is in second spot on housing finance.

CommSec Chief Economist Craig James said: “Strong population growth continues to buoy Tasmania’s economy and has helped lift the state into the second spot overall. While NSW is now in third position the reality is that there is very little to separate these two economies with NSW consistently strong across all indicators.”

Below the top three, the ACT is in fourth spot, supported by a strong job market and solid demand for homes. Queensland and South Australia remain in fifth and sixth spot respectively with both states contending with relatively high jobless rates. Western Australia remains in seventh position, ahead of Northern Territory.

“Overall the underlying signs for the economy are positive. All States and Territories continue to see double digit economic growth over the long term average against a backdrop of a global slowdown and continued US-China tensions,” Mr James said.

When looking across growth rates for the states and territories, Victoria exceeded the national-average on seven of the eight indicators from ACT (six), Western Australia (four); and Queensland and Tasmania (three). At the other end of the scale, Northern Territory underperformed national results on all but one indicator. NSW and South Australia out-performed the national growth rate on two indicators. For the sixth consecutive quarter Victoria has remained Australia’s best-performing economy. Over the quarter, Victoria was unchanged in its rankings for all eight indicators and maintains top spot for economic growth with economic activity in the June quarter 26.6 per cent above decade average levels.

Tasmania has continued to edge up in the performance rankings and is now solely in second spot based on strong population growth. Tasmania is ranked first in relative population growth, dwelling starts and business investment and is now ranked second for housing finance. Tasmania is also the strongest on new vehicle sales, up 8.4 per cent on decade averages.

“The Apple Isle has crept past NSW to now rank second in CommSec’s State of the States. Tasmania’s population growth is now double the state’s long term average and this is driving strong business investment and dwelling starts. These are positive signs for Australia’s island state with economic activity 19.3 per cent above decade average levels,” Mr James said.

NSW continues to be consistently strong across all indicators but has lost one place in the overall economic performance rankings to third, behind Tasmania. However, there is very little to separate the two economies on the overall rankings.

“Despite dropping to third place, NSW remains ranked second on five of the eight indicators. State economic activity remains strong with output 24.7 per cent above the ‘normal’ level of output. While NSW fell one spot each on population growth and dwelling starts, strong employment, construction and home building sectors continue to buoy the state,” Mr James said.

The ACT remains in fourth spot on the economic performance rankings, supported by a strong job market and solid demand for homes. The ACT is now in top spot for housing finance with the number of commitments up by 17.0 per cent on the long-term average.

“The ACT is solidly in fourth spot on the rankings. The ACT is now ranked first on housing finance and second on equipment investment and leads the nation with the strongest annual employment rate, up 3.3 per cent,” Mr James said.

“Queensland has continued to show signs of improvement and has retained its in fifth position in the performance rakings. The state is second ranked on relative population growth and third ranked on relative economic growth. But Queensland is fifth or sixth on most of the other indicators,” Mr James said.

South Australia remains in sixth position. But, as has been the case for the past 21 months, there is little to separate Queensland and South Australia.

Western Australia retains seventh spot on the economic performance rankings and remains ranked seventh on six of the indicators. However, there are positive signs for the economy with the state’s annual population growth of 1.0 per cent the fastest rate in four years and equipment investment is at four and a half-year highs.

“Western Australia stays in seventh spot but the State is starting to narrow the gap with Queensland and South Australia. Western Australia has lifted two spots on economic growth and lifted one spot on unemployment,” Mr James said.

“The Northern Territory remains in eighth position. There were no changes in relative rankings on the eight indicators. But encouragingly the Northern Territory is experiencing a lift in equipment spending from a low base. It does continue to underperform the national results on all but one indicator, economic growth.

Click here to read the latest CommSec State of the States report.