Latest economic rankings show that Victoria is the best performing economy in the nation with NSW easing to second spot. Meanwhile Tasmania pushes clear of the ACT into third position.

For the first time in three quarterly surveys, Victoria is the best performing economy in its own right as it continues to benefit from solid population growth and a strong job market, according to the latest CommSec State of the States report.

Tasmania’s economy has continued to strengthen and is now solely in third spot on the back of strong building and housing finance. And Queensland has lifted to fifth position with the Sunshine State ranking third on relative economic growth and relative population growth.

CommSec Chief Economist Craig James said: “There are positive signs for the national economy following a very busy quarter. In May, we saw the Morrison Government returned to office along with it the legislation of its tax cuts. While in June, we saw the Reserve Bank for the first time in three years cut the cash rate. And then it cut rates again in July. While we expect this stimulus to boost spending in the coming months, all eyes will be on the job market as the RBA looks to drive unemployment lower, leading to stronger wages growth.”

“There continues to be very little to separate the Australia’s two largest economies, NSW and Victoria. While equipment investment dipped in NSW, both economies continue to show robust economic growth and are consistently strong across all indicators.” 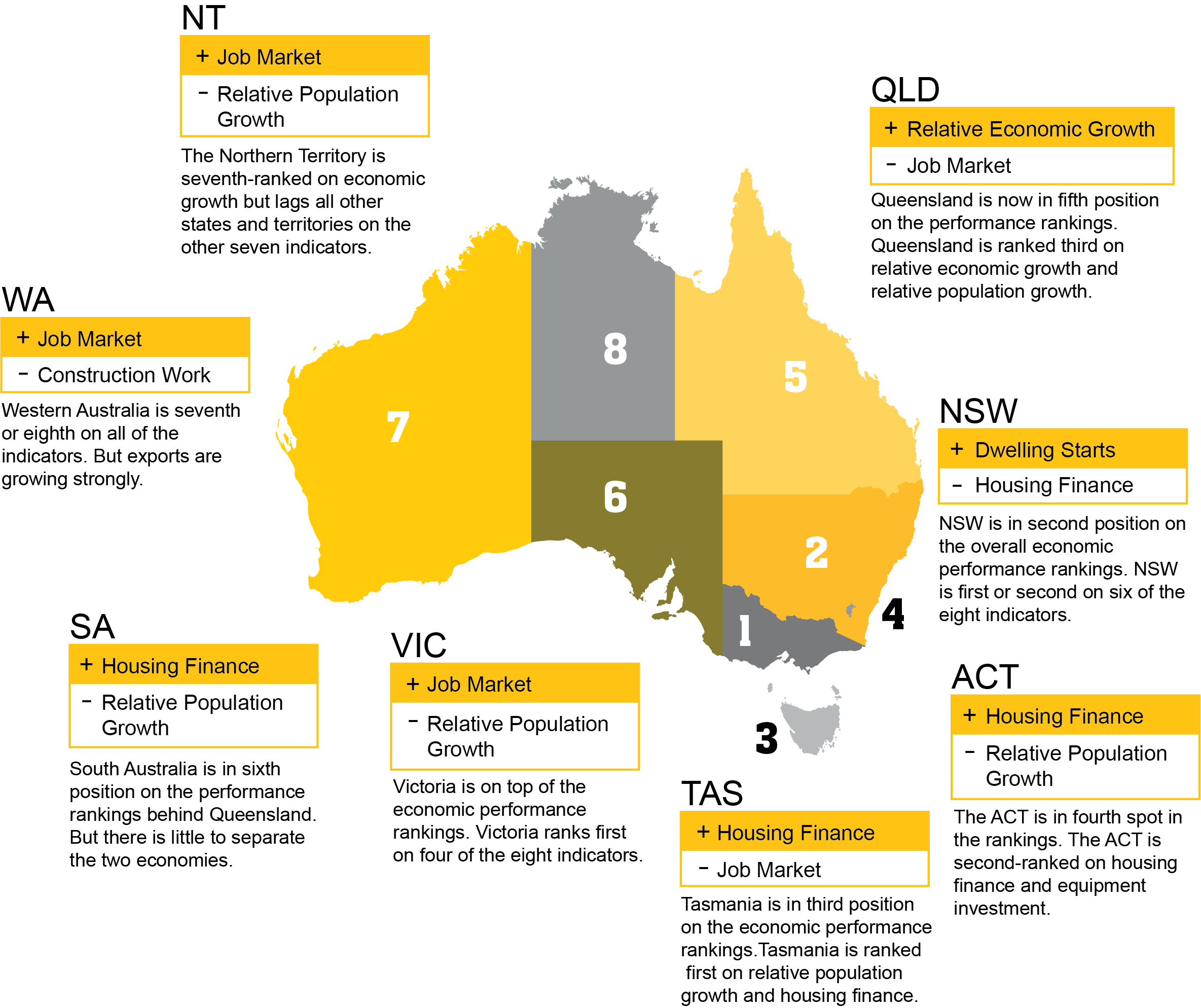 For the first time in three quarters, NSW has slipped to second place behind Victoria. NSW is ranked first or second on six of the eight indicators. Home building in NSW remains strong and the State now leads the nation due to above “normal” population growth. Dwelling starts are 14.9 per cent above decade averages.

“While little separates NSW and Victoria, NSW has slipped to second position following softer equipment investment figures released in the March quarter. Underlying fundamentals of the NSW economy remain sturdy with trend unemployment of 4.5 per cent and strong economic growth, up 25.1 per cent in nominal terms above the decade average,” Mr James said.

Tasmania has edged up in the performance rankings and is now solely in third spot with strength in the building and purchase of homes. Tasmania is now ranked first in housing finance with the number of commitments up by 11.3 per cent on the long-term average.

“The Apple Isle has stepped clear of the ACT and is now solely ranked third in CommSec’s State of the States. Tasmania remains ranked first on relative population growth, housing finance and equipment investment and is in second spot on dwelling starts. Tasmania’s annual population growth of 1.24 per cent is the fastest rate in 27 years,” Mr James said.

The ACT is now in fourth spot on the economic performance rankings. The ACT is ranked second on housing finance and equipment investment and is third ranked on retail trade and unemployment.

“Queensland is now in fifth position in the performance rakings and continues the improvement over the past three quarters. Stronger population growth has boosted retail spending which is now growing at a 5.5 per cent annual trend rate.” Mr James said.

“South Australia has fallen to sixth position behind Queensland in the economic performance rankings but as has been the case for the past 18 months, there is little to separate the two economies. South Australia is fourth-ranked on the job market and housing finance but remains seventh for population growth,” Mr James said.

Western Australia retains seventh spot on the economic performance rankings. Western Australia continues to record the fastest nominal economic growth in the country, up 10.6 per cent in the year to March.  Also encouragingly, population growth is now the strongest in four years.

The Northern Territory continues to remain in eighth position. The ‘Top end’ is seventh-ranked on economic growth but lags all other states and territories on the other seven indicators.

“The Northern Territory retains eighth position on the performance ranking. The economy under-performing national results on annual growth on all but one indicator. One positive sign though is wage growth with the Northern Territory currently enjoying the biggest real wage gap with wages 2.0 percentage points higher than consumer prices. However, the territory’s population shrank by 0.41 per cent over the past year – the biggest decline in 36 years of quarterly records,” Mr James said.

Click here to read the latest CommSec State of the States report.