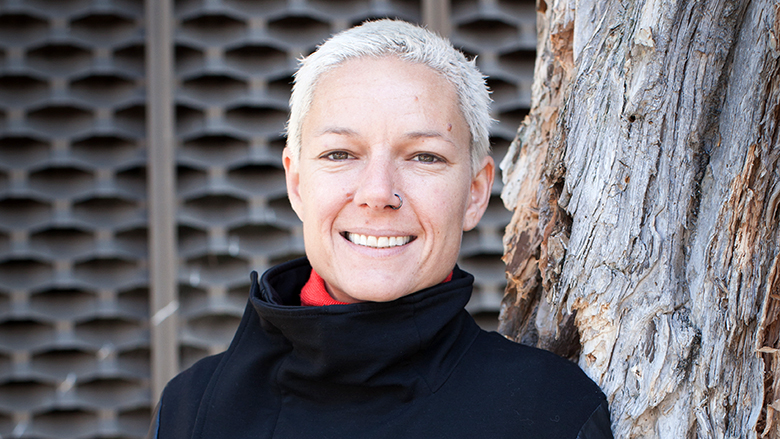 The financial abuse that can accompany domestic and family violence often remains unseen.

Amid the harrowing stories and damning statistics of the impact that domestic, family and sexual violence has on Australians, Moo Baulch can see signs that progress is finally being made to confront what she describes as society’s “hidden epidemic”.

Growing public awareness as increasing numbers of survivors come forward is driving governments, community organisations and companies including CBA toward a more proactive approach to try and prevent an issue that affects thousands of women, children and men every year, she says.

An experienced campaigner with non-government organisations in the UK, Australia, Spain and Asia, the passionate Londoner has headed up Domestic Violence NSW for the past four years.

“There has been a shift in public awareness around violence against women in general. We’ve had a number of high profile survivor advocates who have spoken out and really shifted the way Australians think about domestic and family violence,” says Ms Baulch.

“At the same time we’re operating in a global context of new conversations about sexual harassment and violence against women, such as (the) #metoo (movement). There is a surge of young and older women speaking out against the violence they have experienced, sometimes over a period of decades. Whether the violence occurs in a domestic partner context or more generally in the public space, we are talking about it, finally.”

Following significant steps forward such as domestic violence campaigner Rosie Batty’s recognition as Australian of the Year in 2015, survivor advocacy is providing a “real energy” that is helping to underscore the responsibility on people to call out intimate partner violence when they see it. But that’s only a start because, as she says, “we’ve got a really long way to go still”.

That effort is underscored by the startling number of Australians affected by physical and sexual abuse by partners and within families.

The Federal Government’s Australian Institute of Health and Welfare 2018 report, released in February of this year, found:

Other types of abuse

Beyond the physical and sexual abuse, financial abuse is another way perpetrators trap their victims in harmful relationships.

Financial abuse can include controlling or restricting access to money, running up debt in a victim’s name or running down the family’s weekly budget.

Separate research has estimated that 16 per cent of Australian women will experience financial abuse during their lifetime. It found up to 90 per cent of female domestic violence victims had been affected.

The issue doesn’t discriminate on grounds of gender, age, social class or location. It can affect women, men and LGBTIQ intimate partnerships as well.

Financial abuse leaves no physical mark, so it can be hard to identify, but its long-term effects can be devastating - socially, emotionally and mentally. For some victims, financial abuse can be a precursor to physical violence. For others, where there is an absence of physical violence, it can make them doubt that what they’re experiencing is a misuse of power and control.

“I didn’t even realise until about two years after it all happened that I’d experienced those covert forums of abuse,” says Dr Ann O’Neill, a victimologist and a survivor of familicide and domestic and family violence.

“I thought at the time it was all about physical and observed forms of physical abuse, not realising [it was also] the harassment and intimidation and lack of access to friends, family and resources.”

Dr O’Neill’s comments are supported by Commonwealth Bank data from the beneficiaries of its ground-breaking Domestic and Family Violence Emergency Assistance Program (DVEAP).

Launched in October 2017, the dedicated helpline received 87,000 calls in its first month and the program has since helped 6,000 people across Australia. On average, 105 additional people each week are receiving assistance from services such as access to independent specialist trauma counsellors, financial assistance, safe establishment of bank accounts and telephony support to ensure appropriate communication with family and friends.

Of the people who have used DVEAP, nearly half were aged between 22 and 35 and one in three were aged between 35 and 50, with residents across NSW the biggest beneficiaries out of the top 10 areas by location. Of those who received assistance, 95 per cent were women.

The CBA initiative has been recognised by Ms Baulch and University of NSW School of Social Sciences Associate Professor Jan Breckenridge as one of the leading programs of its type in the corporate sector. Professor Breckenridge is also co-convenor of the university’s Gendered Violence Research Network.

CBA has partnered with Domestic Violence NSW to develop a guide for people working with victims of domestic and family violence to help them identify and provide support for those experiencing financial abuse. The guides provide local contacts for each state.

Other initiatives include providing $400,000 to train financial counsellors across Australia in Domestic and Family Violence and donating $500,000 to fund 10 scholarships a year for the next 10 years to study financial counselling. CBA also commissioned the national prevention foundation, Our Watch, to review the bank’s financial literacy schools initiative, Start Smart, to focus equally on girls and boys and gender equity principles.

“In relation to financial abuse, one of the difficulties is that perpetrators will do things that are not illegal,” says Professor Breckenridge. “They do disadvantage the victims and position them poorly. I think that’s why financial abuse hasn’t had as much attention - because it’s not always a criminal act.

“People are undermined, their confidence is undermined. They don’t have access to their own resources. If they don’t have access, they can’t move. It’s as simple as that. If they have no money, what do they do with the kids? Very often people return to violent relationships and people put their hands up in despair.”

Recognising and detailing the signs of such abuse has been key to training frontline CBA workers as part of the program, added Professor Breckenridge. “When we started to say this could be a red flag, we say ‘let’s think about why that could be’, you could see a light turn on.”

It’s part of CBA’s strategic approach to provide a safe place to work, support customers in crisis, champion equality, promote the financial independence of women and publicly advocate for change, she says.

Knowing that the bank had little expertise in this area, CBA spoke to peak bodies, academics, service providers, victim and survivor support groups and governments, to put together its program of action.

“Our focus on financial education and independence aims to combat the potential of financial abuse -because you can’t make choices if you can’t manage your money, and for those in violent relationships, it can literally mean the difference between life and death,” says Ms Fitzpatrick.

The overall aim is to be part of a movement that ends domestic violence in a generation, but it’s a high bar to set.

“We know it’s a really aspirational goal. We wanted to say, ‘What can we do in a generation that is going to make a real change?’ This is where we start.”